Nicola Sturgeon’s SNP chief executive husband will be quizzed today about how the Scottish government dealt with sexual assault claims against Alex Salmond.

Peter Murrell will be asked about texts sent to a senior SNP staffer saying it would be a ‘good time to be pressurising police’ just a day after Mr Salmond went on trial for attempted rape and indecent assault.

The SNP chief will be grilled by MSPs at the Holyrood Inquiry, which is reviewing Ms Sturgeon’s government’s botched handling of complaints against the former First Leader. 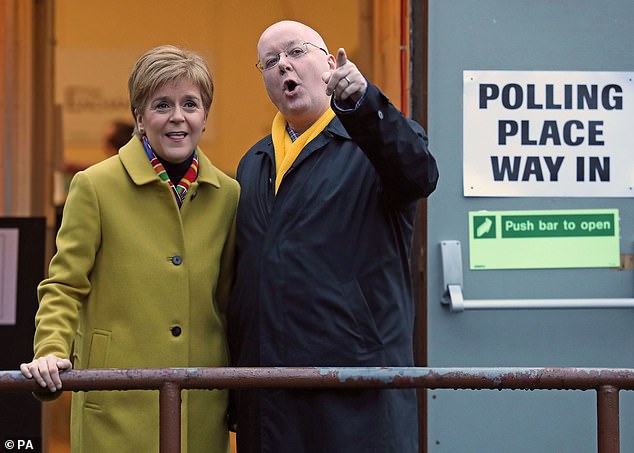 Timeline of the scandal that split SNP in two

October 31, 2017 – Ministers order a review of the Scottish government’s ‘policies and processes for addressing inappropriate conduct’ in the wake of the MeToo movement.

Miss Sturgeon insisted that the new sexual harassment policy must cover allegations against former as well as current ministers – a move Mr Salmond’s allies have used as evidence of a conspiracy against him.

January 2018 – Two female staff members make formal complaints to the government against Mr Salmond, dating back to when he was first minister in December 2013.

March – Mr Salmond is informed about the investigation.

April 2 – The date Sturgeon previously claimed to have first learned of complaints about Mr Salmond when he told her, during a meeting at her home.

March 29 – The date she later admitted to have heard about them in a meeting with Geoff Aberdein, Mr Salmond’s former chief of staff, at her parliament office.

January 25 – Her husband, Peter Murrell, texts a senior SNP staff member calling for pressure on the police to act: ‘Totally agree folk should be asking the police questions… report now with the PF on charges which leaves police twiddling their thumbs. So good time to be pressurising them. Would be good to know Met looking at events in London.’

Second text: ‘TBH the more fronts he is having to firefight on the better for all complainers. so CPS action would be a good thing.’

March 23, 2020: Salmond is acquitted of all charges following a trial.

Mr Salmond was later cleared of all charges and successfully sued the Scottish government over its investigation into him.

A judge concluded the probe had been ‘unlawful’, leading to the current inquiry into Miss Sturgeon’s conduct and whether she showed deliberate bias.

Mr Murrell told the inquiry in October he ‘didn’t express himself well’ in the messages and denied he was trying to push for tougher police action against Mr Salmond.

He sent two messages to a senior SNP staffer after Mr Salmond appeared at Edinburgh Sheriff Court in January 2019 which appear to show he supported pressuring police.

The first read: ‘Totally agree folk should be asking the police questions… report now with the PF [procurator fiscal] on charges which leaves police twiddling their thumbs.

‘So good time to be pressurising them. Would be good to know Met looking at events in London.’

In a second text he wrote: ‘TBH the more fronts he is having to firefight on the better for all complainers.

‘So CPS action would be a good thing.’

Giving evidence to the inquiry in October, Mr Murrell said: ‘I acknowledge I did not express myself well’ but insisted but claimed his ‘intended meaning was that any and all complaints should be appropriately investigated’.

He said: ‘My intended meaning was that any and all complaints should be appropriately investigated.

‘As most people will appreciate, the immediacy of text messages lend themselves to informal, shorthand forms of expression but, even so, I would wish on reflection to have expressed myself more appropriately.’

SNP MP Kenny MacAskill has said the messages were ‘entirely inappropriate’ and any attempt to influence criminal investigations was ‘unacceptable’.

The Holyrood inquiry is examining the Government’s botched probe into two harassment complaints against Mr Salmond.

After a judicial review, it was found that the investigation was ‘tainted with apparent bias’.

The former SNP leader was then awarded more than £500,000 to cover his legal fees.

Mr Salmond was cleared of 13 charges of sexual assault in March 2020.

Within her written submission, Miss Sturgeon had described her 30-year friendship with Mr Salmond – insisting the consequences of the investigation into him had caused her a ‘great deal of personal anguish’ and had led to the breakdown of the relationship.

She has also strongly refuted accusations she was ‘conspiring’ against Mr Salmond during the complaints process.

She said: ‘Indeed it seems to me that what some want to present as a ‘conspiracy’ is in actual fact my refusal to ‘collude’ or ‘cover up’.’