Paris: Spain’s postal service prompted widespread criticism this week after introducing skin-tone stamps – with the lightest ones being the most valuable – and promoting them as part of an anti-racism campaign.

“The darker the stamp, the less value it will have,” the state-owned company, called Correos, said in a news release announcing the launch.

“Therefore, when making a shipment, it will be necessary to use more black stamps than white ones. That way, each letter and each shipment will become a reflection of the inequality created by racism.” 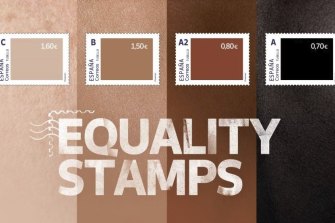 Spain’s skin-tone stamps – with the lightest ones being the most valuable.

A black stamp is worth 70 eurocents in the company’s online shop, while a stamp in the lightest skin colour costs €1.60.

Critics say the campaign reflects tone-deafness and the lack of diversity in major Spanish companies.

Correos’s intention “was good,” acknowledged Moha Gerehou, author of What’s a Black Man Like You Doing in a Place Like This, a recently published book on racism in Spain.

But Gerehou said it is no coincidence that a well-intentioned anti-racism campaign had ended up sending a racist message.

Such campaigns in Spain, Gerehou said, are often shaped “mostly by white people” because major enterprises lag behind on the diversification of their workforces.

On its Twitter account, the postal service said its campaign was aimed at raising awareness about “an unfair and painful reality that should not exist.”

In releasing the stamps, Correos collaborated with SOS Racismo, a federation of Spanish anti-racism non-governmental organisations, and with Spanish activist and rapper El Chojín.

In a statement, SOS Racismo said the campaign’s intention was “to make this reality (of racial discrimination) visible.”

“We have seen it these days in Ceuta, we see it every day in the Mediterranean, in the growing xenophobic and racist discourses that are taking hold in Europe,” it added.

SOS Racismo was referring to dramatic scenes in the Spanish enclave of Ceuta this month involving thousands of migrants desperately attempting to reach European Union territory from neighbouring Morocco.

The postal service did not immediately respond to a request for comment on the criticism of its campaign.

In the news release accompanying the introduction of the stamps, it said they were timed to coincide with the commemoration of European Diversity Month and the first anniversary of George Floyd’s death on Tuesday.

The murder of Floyd, a black man, by a White police officer in Minneapolis last year, sparked protests across the United States and around the world, including in Spain, where activists joined the global movement in seeking to raise awareness about discrimination and racism.

During one of the biggest such rallies in Spain, thousands marched in Madrid in June, making their way to the capital’s Puerta del Sol square, a popular spot for LGBT rights rallies and environmental protests.

Spain’s postal service has repeatedly waded into social causes in recent years, and it had so far managed to largely avoid controversy despite the campaigns’ often liberal bent in a country that is majority Catholic.

Last year, the company celebrated Pride Month by releasing a stamp in the colours of a rainbow flag. In 2019, it released a “collection of stamps that reflects the voices of discord and protest of thousands of young people fighting for the environment,” as it announced at the time.