Spain is braced for its hottest EVER day with sweltering 116F

Elsewhere in Europe, intense heat which has been baking Italy pushed northward towards the popular tourist destination of Florence on Friday while wildfires charred the country’s south. 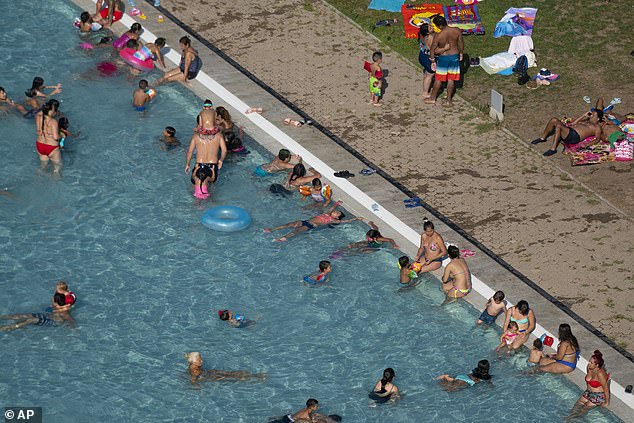 Spain is headed for an all-time record temperature this weekend. Pictured: People cool off in a public pool in Barcelona, Spain 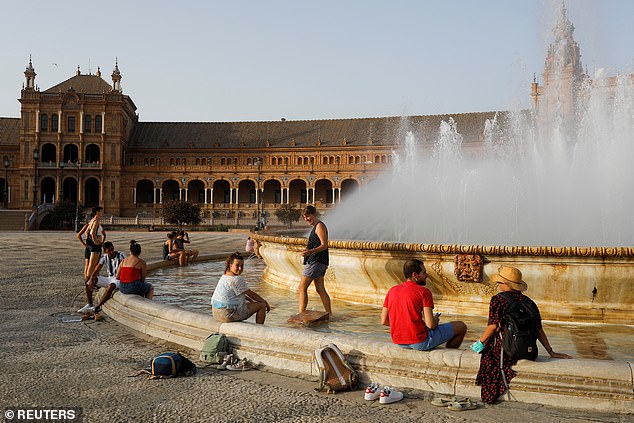 Temperatures as high as 116.60F (47C) are forecast in the south on Saturday. Pictured: Tourists cool off in a fountain at the Plaza de Espana in Seville 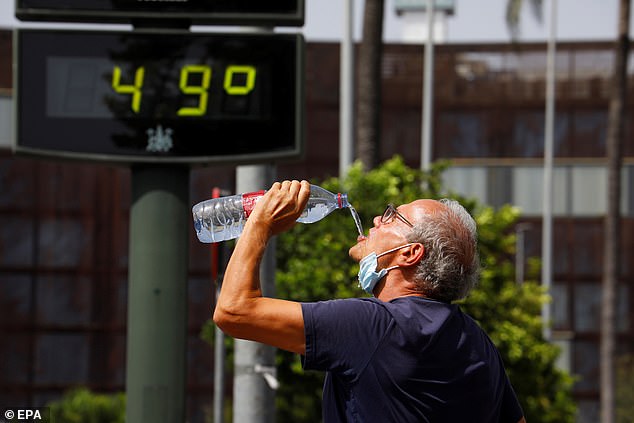 Temperatures could  break a national record of 116.4F (46.9C), set in Cordoba in July 2017. Pictured: A tourist drinks water on a hot day in Cordoba

Italy saw temperatures in places upwards of 104F (40C) and by late afternoon Friday, the heat in Florence reached 102F (39C). The heat has lead to the health ministry issuing alerts for Saturday in both Florence and Bologna.

Giancarlo Penza, of the Rome-based Catholic charity Sant’Egidio Community, reminded viewers of state TV that the most vulnerable in such weather are elderly people living alone and the homeless.

‘The latter are the persons who are invisible, who live on the street,’ Penza said. ‘Knock on the door of an older person’ who lives alone, next door, or ‘stop someone on the street’ without a home and ask if they need help, he urged Italians.

Many southern European countries have suffered days of intense heat, accompanied by deadly wildfires in Algeria, Turkey, Italy and Greece.

While the area is known for its sunny, hot summers, scientists voice little doubt that climate change from the burning of coal, oil and natural gas is driving extreme events such as heat waves, droughts and wildfires.

Such hardships are likely to happen more frequently as Earth continues to warm, they say. 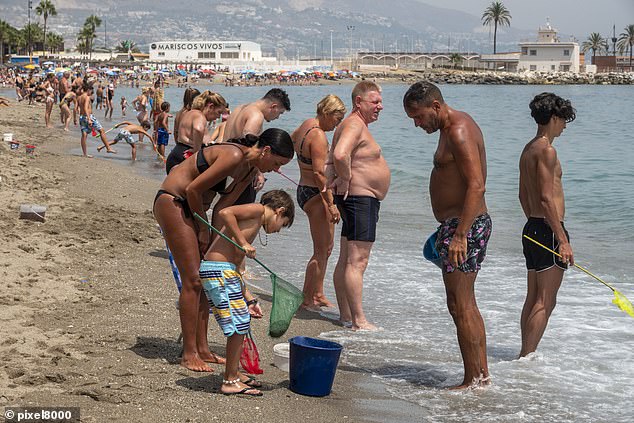 The extreme temperatures in Spain comes as a heat wave makes its way across southern Europe. Pictured: Holidaygoers enjoy a day on the beach in the Costa del Sol 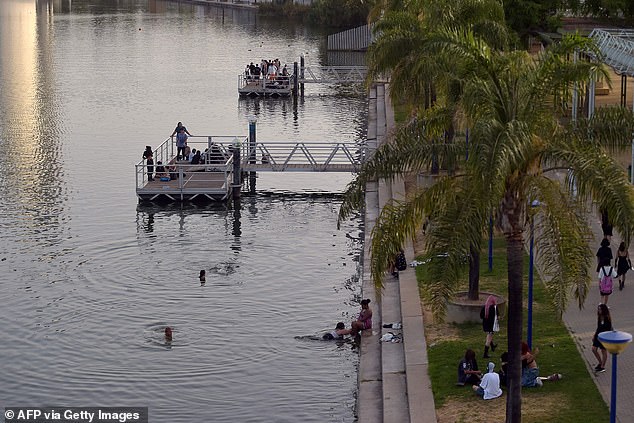 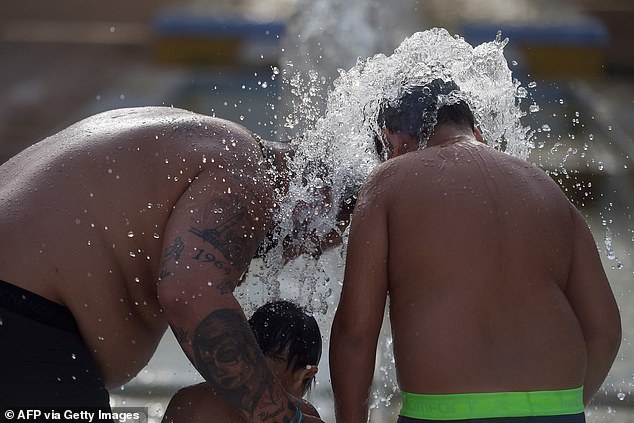 Wildfire problems will only worsen because of abandonment of rural areas and climate change, the environment minister of Cyprus said.

The eastern Mediterranean, where the island nation is located, is a ‘global climate change hot spot,’ where biodiversity and forest ecosystems are ‘intensely negatively impacted,’ said Minister Costas Kadis.

Unworked agricultural land is being overrun by wild growth, making it easy terrain for fires, which are ever ‘more intense, destructive and frequently occurring’ as a result of more frequent and longer heatwaves and droughts, the minister said.

Italian Premier Mario Draghi sent his emergency chief to Calabria in the south, where blazes burning for days in the rugged Aspromonte forest have claimed four lives.

Draghi pledged government aid for those losing property or businesses and an ‘extraordinary plan of reforestation.’ 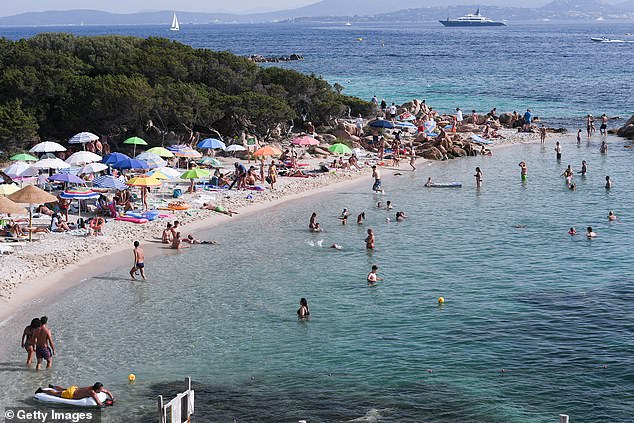 Italy saw temperatures in places upwards of 104F (40C) and by late afternoon Friday, the heat in Florence reached 102F (39C). Pictured: People enjoy a day on the beach in Sardinia 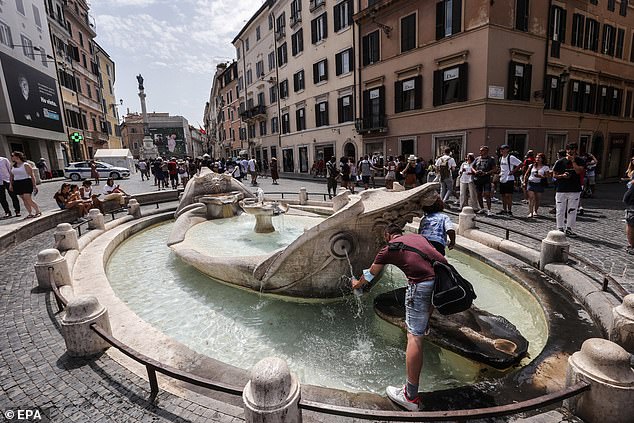 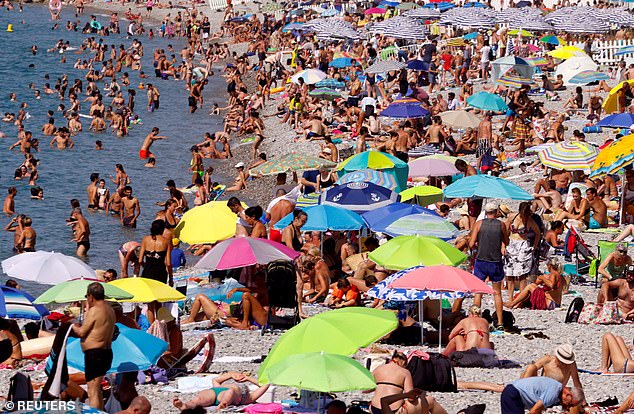 Wildfires on the Italian island of Sardinia were reported largely contained, but a blaze early Friday near Tivoli in the countryside east of Rome forced the evacuation of 25 families.

Italian firefighters were also battling blazes near Mount Etna, the volcano in Sicily which for months has been belching flames and lava.

Authorities said fires erupted in separate locations in the woods, raising suspicions they were caused by people, either deliberately or by accident.

On Greece’s second-largest island of Evia, where devastating blazes in the wake of an exceptional heat wave this summer have been described as the nation’s worst ecological disaster in decades, a fresh fire broke out on Friday. 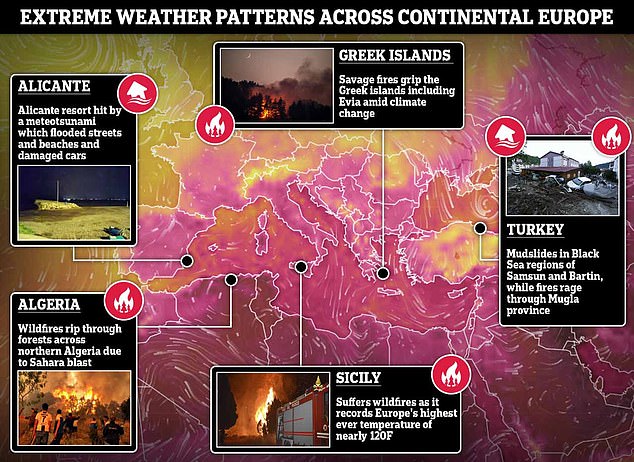 Flooding and wildfires have fast become the norm both in the Mediterranean – including the Greek islands, Alicante, Sicily, Turkey and Algeria in Northern Africa 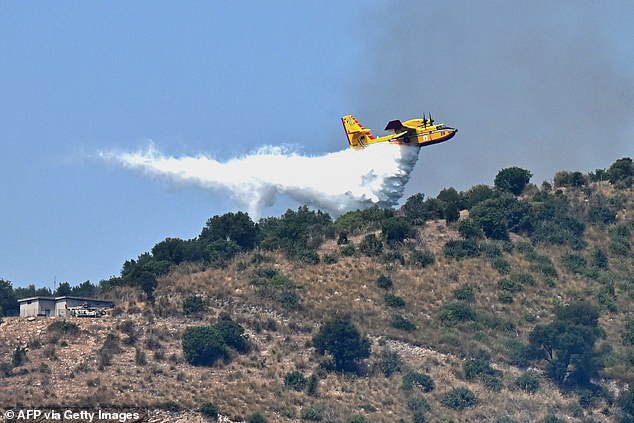 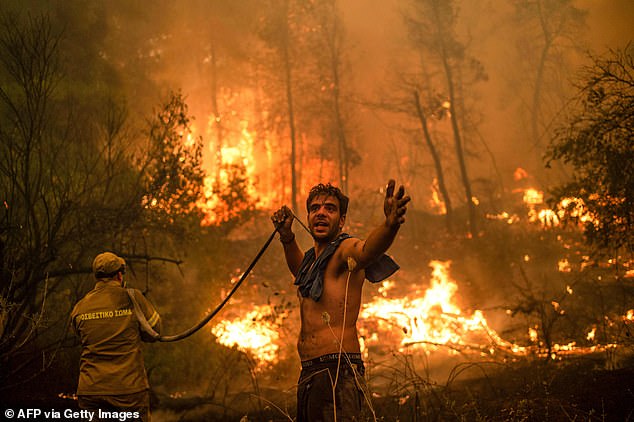 Elsewhere in Spain’s sizzling south, in the city of Malaga, Juan Villodres was doing a brisk trade selling cold drinks from a kiosk. ‘The heat wave this year is getting more intense, and the last one this strong was in 2019,’ Villodres said.

On Wednesday, the Italian town of Floridia near the city of Syracuse in Sicily reported a temperature reading of 119.8F (48.8C).

On Friday, a World Meteorological Organization official said at a briefing in Geneva that it could take a month or two to verify the reading and determine if it’s indeed a record for continental Europe, topping the previous 118.4F (48C) set in Athens in 1977.

France’s national weather agency warned of temperatures as high as 104F (40C) on Friday and Saturday in the Provence region, near the border with Italy.

Temperatures in Portugal on Saturday and Sunday were forecast to climb into the 40s. In much of the country, with a significantly increased risk for wildfires, the public has been barred from entering forested areas and is banned from using fireworks or farm machinery that could cause sparks.

In Serbia, the army has deployed water tanks and authorities have appealed to residents to avoid watering gardens. A weeks-long drought is worrying cattle owners, particularly in remote villages in hilly areas.