A Spanish man allegedly drugged and killed his two young daughters before dumping their bodies into the sea – leaving their distraught mom wishing she could have died with them, a report said.

The body of Beatriz Zimmerman’s 6-year-old daughter Olivia Gimeno was found by a deep-sea robot in a bag more than 3,000 feet underwater off Tenerife, the largest of Spain’s Canary Islands, the Sun reported.

The other girl, Anna Gimeno, 1, and their dad, Tomás Antonio Gimeno, 37, remain missing and presumed dead, but an oceanographic research ship equipped with special sonar found a clue when it located a second bag, which was empty, according to the Guardian.

The girls’ distraught mom told reporters that she believes her kids’ dad left her alive to suffer without her daughters.

“As a mother it pains my soul not to have been able to save their lives,” she wrote. “I wish I had been there at that moment with them, holding their hands and dying together.”

Spain’s Guardia Civil police force is continuing the search for Anna and Gimeno.

“The body was found by a robot from the search vessel Angeles Alvarino at midday [Thursday] around 1,000 meters below the water some three miles off the Tenerife coast,” a police spokesman said after Olivia’s body was found.

“It was inside a sports bag attached to an anchor. Next to it was another empty sports bag,” he added. “The body was taken to dry land for an autopsy. The vessel called Angeles Alvarino is continuing its search.”

Gimeno was reportedly helped by at least one other person in carrying out what has been described as a premeditated kidnapping on April 27 after failing to return with the girls to their home in the Tenerife capital of Santa Cruz, the Sun reported.

“They are now two angels who came into the world to teach a great lesson at the cost of their own lives,” Zimmerman wrote in an emotional tribute to her daughters.

She also called her former partner’s alleged actions “the most monstrous act a person can commit.”

The devastated mother said she had accepted that Anna is also dead as she thanked people who had helped by spreading her desperate messages and praying.

Zimmerman added: “But that couldn’t happen because Tomas wanted me to suffer looking for them without rest and for the remainder of my life. That was the reason he left me alive.”

Gimeno had disappeared after warning his ex that she would never see her girls again after she began a new relationship with a wealthy new partner, an older Belgian man named Eric Domb, the Sun reported.

He reportedly beat up the 60-year-old man before kidnapping the girls. 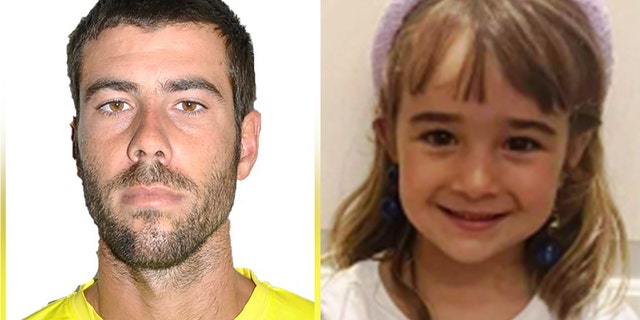 Judge Priscila Espinosa Guterriez said evidence showed the father did not plan “to snatch them from their mom and take them to an unknown place.”

Instead, the judge wrote, he planned “to kill them in a planned and premeditated fashion to cause his ex-partner inhumane pain.”

Guterriez added: “He allegedly deliberately tried to create uncertainty regarding the fate his daughters had suffered by hiding their bodies on the ocean bed after killing them, choosing a place deep underwater and far from the coast where he thought they would never be found.

“All this happened after he told his ex-partner and his close circle he was going to disappear with the girls and they wouldn’t be seen again,” she wrote, the Sun reported.

On Friday, court officials announced that Olivia had died of pulmonary edema, a condition caused by excess fluid in the lungs.

Her father was caught on surveillance video carrying bags from his Audi A3 to his boat at a marina in Santa Cruz. The empty boat was discovered without its anchor off Puertito de Guimar, about 10 miles south of Santa Cruz, hours after he and the children disappeared.

Santa Cruz Mayor Jose Manuel Bermudez said after the gruesome discovery of Olivia’s body: “There are no words to express the terrible desolation I feel.

“From respect for the mother’s pain and with all the caution the terrible news that is reaching us deserves, I want to express to the family all the solidarity of the citizens of Santa Cruz,” he said.

Soccer star Cristiano Ronaldo’s partner Georgina Rodriguez was among the celebrities who shared a video of Olivia and Anna released by their mom as part of a massive social media campaign calling for help in finding them.

“I want to use my reach on this great social network to make sure this reaches as many people as possible,” Rodriguez wrote her 24 million followers on Instagram.

“These are two sisters who are being searched for in Spain and abroad. They are called Olivia and Anna and are aged six and one,” she wrote.

“Their mom is seeking maximum publicity for this video to try to find them as soon as possible and bring them home,” Rodriguez added.

“I hope with all my heart that the girls are found safe and well and can hug their mum again soon.”