Passengers are being told to arrive as close as possible to two hours before their domestic flight to help Sydney Airport manage crowds, as school holidays and staff shortages cause delays.

Wet weather conditions have contributed to some delays and cancellations, but the most significant factors have been the school holiday season rush and the airport struggling to replace about 15,000 staff it shed during the pandemic. 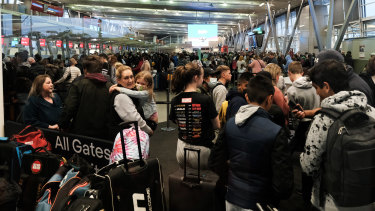 Queues at Sydney Domestic Airport Terminal 2 snaked outside the terminal on Saturday, impacting airlines including Jetstar and Virgin.

With delays expected to continue until at least July 18, Sydney Airport is asking domestic passengers not to be tempted to arrive more than two hours before their departure time.

For international flights, travellers are advised to arrive as close as possible to three hours before their flight.

“We won’t sugar-coat the fact that the terminals will be busy during the school holidays, and there will be queues.”

It’s especially important for people who will be going through the airport at peak times during the day including between 5am and 9am, and from about 3pm in the afternoon.

A significant job shortage at Sydney Airport is also contributing to pressures. During the pandemic, the airport lost about half of its 33,000 staff across 800 businesses, including airlines, baggage handling, security, shops and cafes and cleaning.

The airport has only managed to replace half of the about 15,000 staff that left.

“There’s still a job shortage of about 5000 roles at the airport,” the spokesperson said. Roles in baggage-handling and security screening are especially short-staffed. 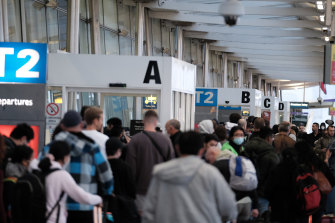 Sydney Airport chief executive Geoff Culbert said they were addressing the increased demand through measures including bringing additional customer service staff into the terminals, but that there would still likely be longer waiting times.

“It’s terrific to see the ongoing demand for air travel but we won’t sugar-coat the fact that the terminals will be busy during the school holidays, and there will be queues,” he said.

Fridays are usually the busiest for airport travel during the holiday period, followed by Mondays and Thursdays.

“In terms of delays, you could probably expect to see queuing most days during the school holiday period,” the Sydney Airport spokeswoman said, noting lines were moving quickly. “Queuing peaked at 30 minutes in the morning period [on Friday].”

The airport is forecasting more than 2 million passengers passing through its terminals in July, of which 1.5 million are expected to be flying domestically.

That’s an increase of 300,000 compared to the equivalent 21-day school holiday period in April this year.

About 15 per cent more passengers booked flights with Virgin Australia this school holiday period than the same time in 2019, before the pandemic.

Flights to Bali are also popular, with demand up 30 per cent when compared to the same school holiday period in 2019.