Startled mother films 'suspected puma' in fields outside her home

Is this a puma prowling the fields of North Wales? Startled mother claims mystery creature she filmed near her home is ‘big cat’ as she joins calls for probe into multiple sightings

A mother was left stunned when she spotted a ‘suspected puma’ prowling the countryside outside her home.

Wendy Williams was sat in her living room in Glan Conwy, North Wales, with her partner when she saw the ‘big cat’ in the fields outside on Saturday.

She managed to film the mystery creature, which was spotted after a string of other suspected puma sightings in the area, and hopes the incident will be investigated.

Her seven seconds footage shows a cat-like animal with pointy ears looking towards her.

Wendy said: ‘I was startled when I first saw it because it was so big and had pointy ears. It looked like a domestic cat but bigger.

‘At first I thought it was a cow or a horse’s head but the more I looked at it, the more it resembled a big cat.

‘There was no way it was a domestic cat because of its size.

‘My daughter suggested it could have been a puma.’ 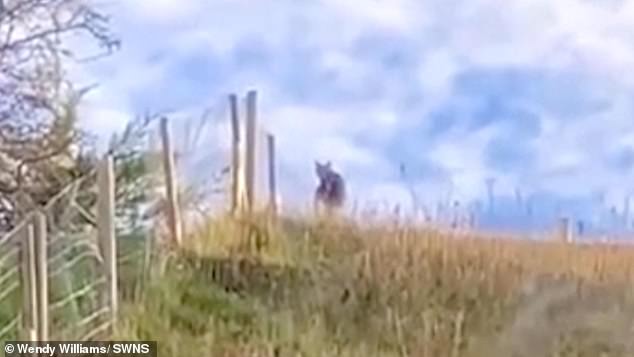 Wendy says she has previously seen cows and horses in the field but never an animal that looked like a ‘big cat’ before.

There have been a number of suspected big cat sightings across North Wales in recent years leading to Conservative politicians to call for a Welsh Government investigation into the mystery creatures.

Earlier this month, two ‘large black cat’ sightings were reported within just one week in a market town in north Wales.

A witness managed to snap a picture of the animal drinking from a trough before another came just 10 meters away from the ‘large black cat’ in Denbigh – close to where several other ‘puma’ spottings took place in recent years.

The apparent sightings both happened on January 12 and January 16.