The Metro Tunnel's builders warned the Andrews government that design changes worth close to a billion dollars at two CBD stations were driving a massive cost blowout to the flagship project.

Confidential government reports leaked to The Age reveal the government pushed back on initial claims made by the constructors – the Cross Yarra Partnership Consortium (CYP) – dismissing the proposed $3.3 billion in extra costs as “overly conservative” and possibly inflated and labelling a projected delay of as much as 18 months “materially overstated”. 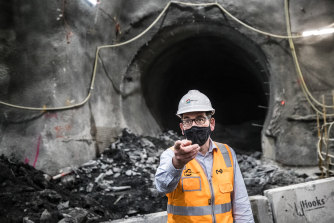 However the secret documents from October last year reveal the government was at that time estimating a six to eight month delay on the $11 billion project. Premier Daniel Andrews and Transport Infrastructure Minister Jacinta Allan have consistently said the project would be built on time, by the end of 2025.

In December last year the dispute between the builders and the government culminated in the consortium switching off the project’s tunnel-boring machines in a public demand for more cash.

Despite initially refusing to bow to the demands for extra money, the state government agreed in June to chip in more than $1 billion under an in-principle agreement struck with the consortium, made up of Lendlease Melbourne Metro, John Holland, Bouygues Construction, John Laing and Capella Capital.

The government has not confirmed the current cost of the project.

An internal review of CYP’s cost forecast by Rail Projects Victoria (RPV) – the state agency overseeing the Metro Tunnel – provides a rare insight into the dispute between the government and the builders.

The documents from October 2019 confirm that CYP was claiming a $3.3 billion blowout and more than a year’s delay – which was roundly rejected by the government – and reveal the key drivers of the project's cost overruns; namely, design changes at State Library station and rising labour costs.

The consortium forecast that the cost of building the station would rise from an initial $480 million to $915 million.

Design changes including height increases in the main station cavern, relocation of passenger lifts, an escalator and fire and station control rooms all drove up costs, along with CYP's decision to redesign the strutting system for the station's access shafts.

RPV accused the contractor of "mispricing the project" and "changing the approach to delivering the works resulting in cost overruns" in the October review.

The state agency said the $26 million CYP claimed it needed to spend on labour at the State Library station was “excessive” and engaged an external consultant to run a forensic review of the proposed expenditure.

The cost of the State Library and Town Hall stations were together tipped to rise by 98 per cent from $907 million to $1.8 billion – an increase of $893 million.

The budget for the remaining stations – Arden, Parkville and Domain – were said to have increased by 58 per cent from $828 million to $1.3 billion.

CYP also blamed unforseen mechanical, electrical and plumbing costs for the project's blowout. CYP forecast these costs would rise by 71 per cent to $949 million.

This was largely driven by sub-contractor overheads, labour rates and materials mark-ups. But RPV dismissed this, finding that when benchmarked against similar Australian metro-style projects, the Metro Tunnel forecasts were 20-30 per cent higher per square metre.

Labour was also offered as another driver of cost increases, with CYP forecasting a 25 per cent increase in required labour, costing $275 million, or 14 per cent of the overrun on direct costs.

CYP attributed this to higher than expected labour rates and poor productivity due to changes in construction methods. But RPV suggested the labour rate was overstated by up to 2.5 per cent.

Sub-contracting was another proposed reason for the cost rises, with CYP using sub-contractors to "de-risk" the project by avoiding industrial relations issues. However, this ultimately added to costs, with a review of a package of works at Domain station showing it would have been 7 per cent cheaper to do without sub-contractors.

The parties have been unable to agree on who is liable to pay for changes to the CBD station cavern designs and construction methods, while the contractor has been accused of under-bidding for the work.

RPV’s review, which was submitted to an independent mediator, acknowledged that CYP faced significant cost pressures and delays but rejected as extraordinary and potentially inflated the consortium’s proposed $3.3 billion blowout.

Late last year, CYP was forecasting a 56 per cent cost overrun on the $5.1 billion it received in capital payments under its tunnel and stations public-private partnership deal. 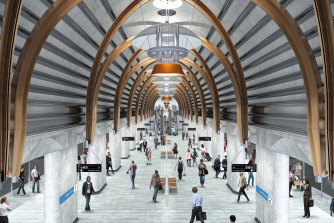 An artist’s impression of what the finished platform will look like at State Library Station.

"Typically, cost overruns of this magnitude can be attributed to extraordinary events or issues that have a [sic] significant cost impacts. CYP have not faced any of these very significant issues and there is limited context to explain the extent of the cost problems forecast by CYP," the review stated.

In its forecasts, CYP asserted that changes in the cost of raw materials and the quantities required was driving up costs — an argument that has been echoed by the Andrews government to explain cost increases on major projects — but RPV said this only contributed to 4 per cent of the cost overruns.

The consortium first revised its budget in April 2018 and made a further three revisions over the following months. The consortium allocated about $370 million of its profit margin to covering unexpected costs in 2018.

By May last year, CYP and the government entered formal dispute resolution process over the project's cost pressures.

An Andrews government spokeswoman said the Metro Tunnel was "on track to be completed a year ahead of schedule" and the project would deliver major benefits to the city.

"Under the mechanisms of the PPP [public-private partnership] contract, the Victorian Government has been working in good faith with our contractors to deliver this urgent project as soon as possible.

"The Metro Tunnel project will change the way Victorians move around our city forever and our workers on the ground have been making huge progress in difficult circumstances."

A spokeswoman for CYP said the government would provide a response on their behalf.