EXCLUSIVE: Steve Irwin’s trusted cameraman relives the horror of filming the Crocodile Hunter’s frantic final moments after stingray attack – and how the infamous death video was almost lost at sea

The last person to see Steve Irwin alive has revealed new details surrounding his final moments and what he believes happened to the lost footage of his death.

Justin Lyons, Irwin’s trusted right-hand man for more than a decade, worked as a cameraman for the Crocodile Hunter from his first documentary in 1996 to when he was fatally struck by a stingray 10 years later.

Lyons opened up to Daily Mail Australia about the brotherhood he shared with the ‘flawed’ environmental hero and where he believes the final copies of his infamous death tape may lie. 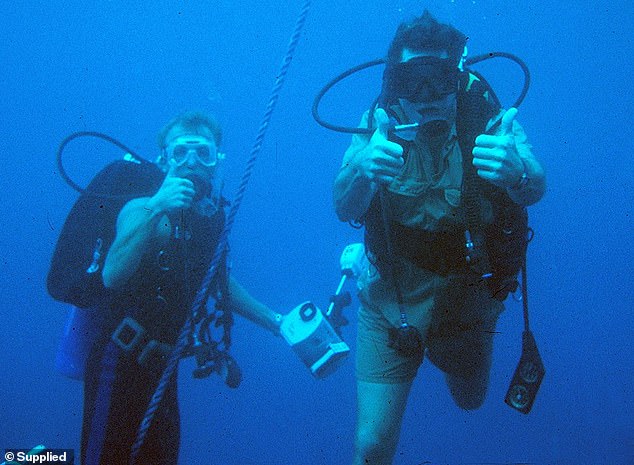 ‘That should never see the light of day. That footage still exists and would be tucked away. I’m pretty sure [Irwin’s manager and film director John] Stainton never gave that away,’ Lyons said.

Stainton has previously told The Daily Mail there was only one copy of the footage and it was destroyed once police were finished with it.

The final day of Irwin’s extraordinary life saw the crew chasing tiger sharks on a sandy reef off the coast of Port Douglas.

They had been in the area for several weeks, filming for a variety of shows including Australia’s Deadliest – shooting extremely venomous stonefish and sea snakes.

After releasing a series of baits to lure the sharks, the crew had no choice but to wait for the predators to arrive – but Irwin didn’t want to remain idle.

‘It was a beautiful morning, we went spearfishing, we had a great time. Then we were just sitting around and waiting for the sharks to come – Steve wasn’t one to sit around and wait, so I said let’s jump in the boat and see what we can find,’ the cameraman said.

‘We never wasted a minute. We were always shooting and because we had some spin-off shows, we used every frame of every shot. If it wasn’t Crocodile Hunter we’d shoot for Bindi The Jungle Girl.’

Lyons and Irwin took a rubber ducky attached to his main boat, named Croc One, and started cruising around the sandy flats where tiger sharks hunted.

Shortly after, they stumbled upon a large stingray.

‘He was awesome. We’d filmed them dozens of times before in deep and shallow water. We knew the behaviour. We weren’t scared of them, Steve had handled them and filmed with them,’ Lyons told Daily Mail Australia. 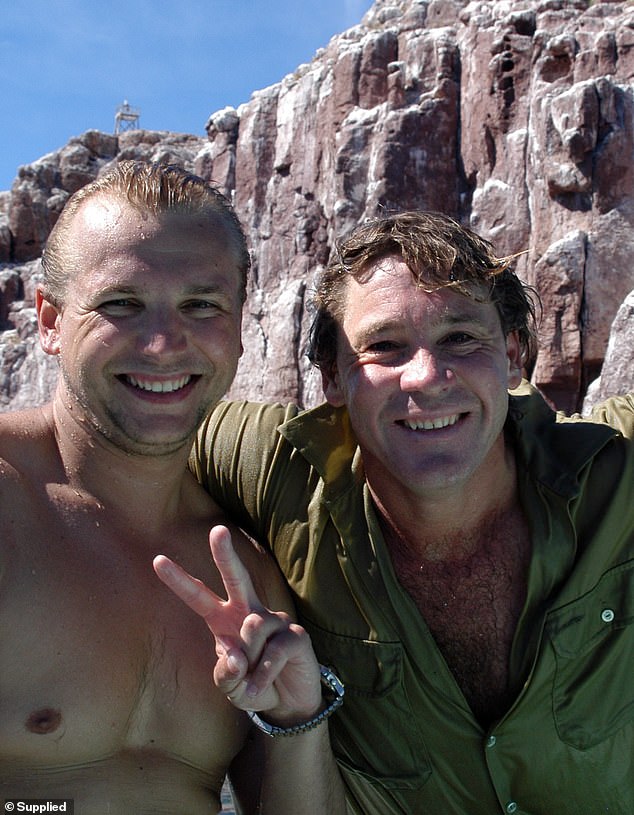 ‘Even thought we’re always careful, we thought this was going to be a joy. We slipped over the side of the boat and started filming him. We were swimming around him, he’d glide off and settle on the bottom.

‘He was the biggest bull ray I’ve ever seen – he was six-foot wide, he was huge. His tail, the barb on his tail, it’s a jagged-edge barb. It’s two-thirds of the way along his tail. The First Nations people would use them as spear tips, they’re unbelievable.’

The pair filmed the stingray for about 10 minutes, swimming above and below it.

‘We thought we’ll film with him until he gets to the point he’s pissed off and then we’d leave him alone,’ Lyons said.

After recording plenty of footage, the last thing they needed was an introduction shot showing Irwin swimming up behind the stingray.

It would be the last thing the Aussie icon ever did.

‘[Irwin] swam up right over his tail. Instead of swimming off, (the bull ray) propped himself on the front of its wings and pushed his rear end up and started madly stabbing with his tail towards Steve,’ Lyons said.

‘The water boiled with bubbles, thrashing and whatnot. The entire time I was locked on Steve. I didn’t know what was going on, I could see it was trying to stab Steve and he was pushing him away but it was over in about 10-15 seconds.

‘The stingray swam off so I panned to film Steve swimming away. It wasn’t until I panned back and the water around him was already filling with blood that I realised.’ 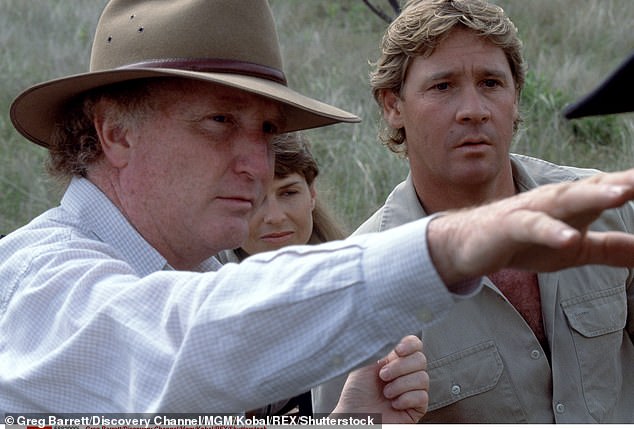 He believed the stingray had punctured Irwin’s lungs and rushed him back to the rubber ducky before trying to contact the main boat.

Lyons managed to get reception and told Brian Coulter and his wife, Kate, who ran the boat, there had been a serious incident.

‘We were there in seconds. I threw the camera into the boat, pushed Steve onboard and Kate floored it towards the big support vessel. Steve is writhing in pain, we were saying to him: “Hang on Steve, you’ll be right”,’ Lyons told Daily Mail Australia.

‘Brian is covering this massive wound in Steve’s chest. There’s blood and fluid oozing from this massive hole. Steve is tensing up writhing in pain. Brian keeps saying: “Think of your kids, you’ll be right”.’

Irwin, fatally wounded and haemorrhaging blood, then looked at his cameraman and muttered his final heartbreaking words.

‘Steve looks directly at me and says: “I’m dying”. I told him: “No you’re not, you’ll be right just hang in there”,’ Lyons said.

The support boat did not have a defibrillator onboard so the crew made the decision to race to Low Isles, a small tourist island off Port Douglas.

They radioed ahead and were told the island had a defibrillator. 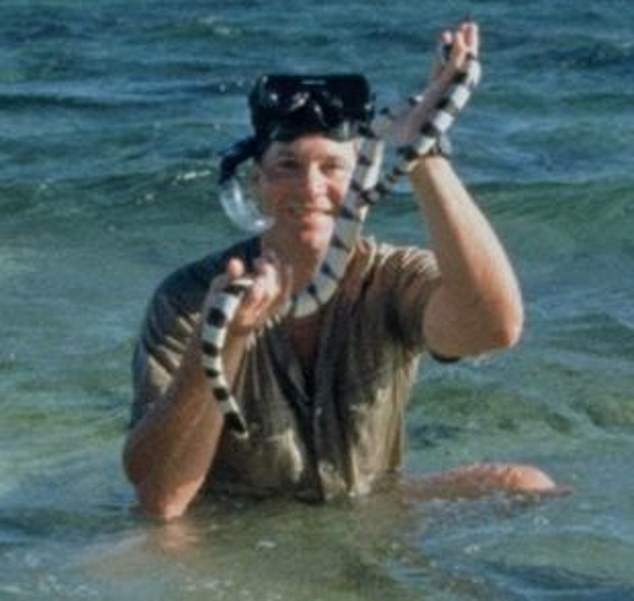 The sting ray was said to have mistaken Steve Irwin, 44, (pictured) for a predatory shark, and lashed out with a deadly barb which punctured the TV star’s chest, piercing his heart

‘The whole time we’d worked under the premise someone had to keep filming regardless of the situation,’ Lyons said.

‘There were a few times over the years Steve had given a cameraman a dressing down for not continuing to film. So our camera guy filmed the moment we arrived, through the CPR. It felt like a lifetime.’

They made the decision to cut the rubber ducky loose from the back of the main boat as it was weighing them down, and sped towards shore – arriving about 45 minutes later.

Upon arrival, a nurse was waiting with the defibrillator but Irwin had been unconscious for a long time.

Lyons said, deep down, he knew that Irwin was already gone.

‘He had no heartbeat, I knew he had no pulse. We were doing full CPR, mouth to mouth. We hooked him up to the defib, this thing was pretty modern, but it never fired. It made all these noises but never fired – I don’t think it would have made any difference in the end,’ Lyons said. 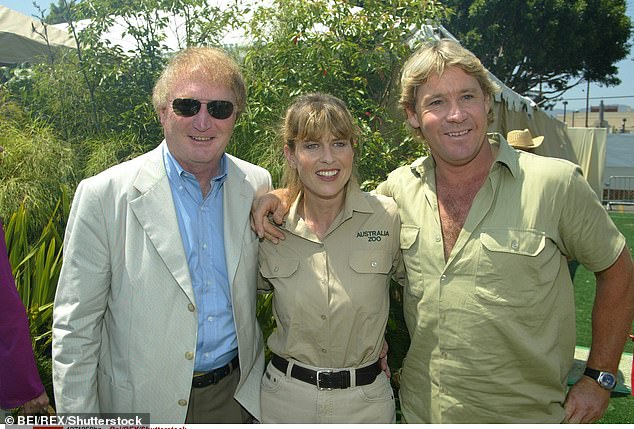 The footage was handed over to authorities who returned it after their investigation was complete. All copies were destroyed except for one which was given to wife Terri (centre)

‘The tourists on the beach didn’t think anything of it. I don’t think anyone recognised him, even though he was in his khakis. Then I heard a helicopter in the distance and had this sense of relief wash over me that he was going to be alright.

‘Professionals are turning up, he’s going to be alright.  These two paramedics jumped out, raced over and knelt down around him. I don’t think they even knew who he was.

‘They knelt down, took about 15 seconds to assess him, checked his chest and wound and said: “He’s dead, there’s nothing we can do for him.”

Unable the grasp the magnitude of what had happened, Irwin’s crew sprung into action and started calling everyone they could.

Irwin’s wife Terri and his brother-in-law did not initially answer their phones.

He urgently called West and told him to go looking for the boat and its cargo.

‘I realised when they cut it loose: “F***, you’ve just cut that boat loose and the camera is in there with the footage of Steve being stabbed in the heart by a stingray”,’ Lyons told Daily Mail Australia. 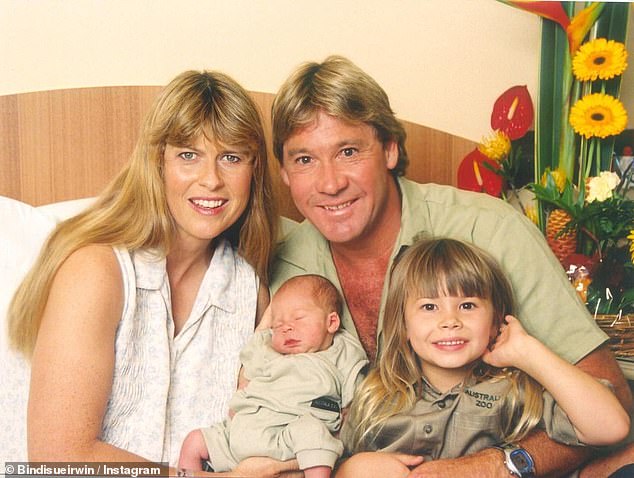 In the 16 years since his death, there has been speculation a copy of the video had been given to Steve Irwin’s widow Terri, pictured here with their children Bindi and Robert

‘I said to Pete West: “Did you watch the footage?” I thought it would be a natural thing to watch it, natural curiosity. He said he did. I said don’t tell me you made a copy, and he promised me he didn’t.

‘My gut instinct says he did make a copy but it’s never seen the light of day.’

The team, still struggling to process what had happened, headed to the mainland with the footage and went straight to police to report the death.

‘We were all interviewed. We all watched the footage then handed it over to police,’ Lyons revealed.

‘Then we went back to our hotel. I went to Stainton’s room and we cried and carried on. By that stage the news had broken and it was starting to get crazy. Stainton was taking calls from people all over the world.’

Grant Kenny offered up his seaplane to help get Irwin’s body home from far north Queensland, while a small private service was organised for close family and friends.

Lyons was told he had to fly to South Australia to shoot blue-ringed octopus and great white sharks, and wouldn’t be able to attend.

The following week they held the public funeral from Australia Zoo on September 20, 2006 – a service watched by more than 300 million people in 130 countries around the world. 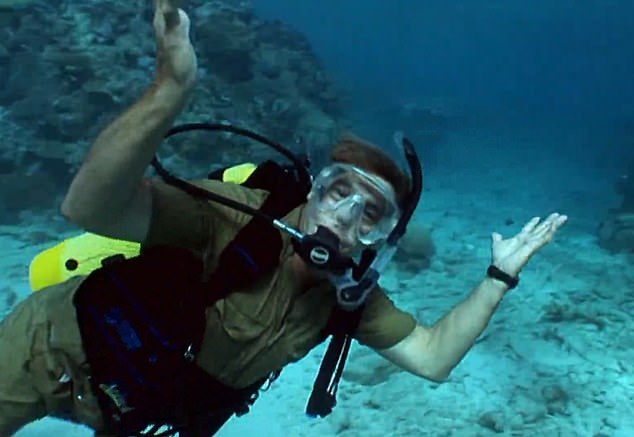 ‘It was totally surreal. The memorial was an out-of-body experience. What made it more bizarre was I had to go into the green room where Terri was. I hadn’t seen her since. I went in and sat with her and told her my version of events. That’s when it hit me. That was a particularly intense moment,’ Lyons said.

‘I was very close to Terri. It took a few weeks for the shock to wear off because I was swimming over that stingray as much as Steve and it could’ve been me who died.

‘If Steve lost a cameraman it might’ve been the end of his career. We were mates, but he might’ve said I’m never putting someone in harm’s way again.’

As for the footage of Irwin’s final moments – Lyons said he’s glad it was never made public but insists copies are still out there.

‘The footage I shot – when he stood up and had blood on him, I buttoned off and raced over. It’s not particularly graphic. What is confronting is the footage of us doing CPR,’ he told Daily Mail Australia.

‘I would say it’s unlikely it would ever come out. I can’t see if Terri found the courage to watch it. If copies do exist, it’ll go to Terri’s grave and whether the kids keep it. If she’s got the only copy.’

Lyons said ultimately he will remember Irwin as a deeply flawed person who was like a brother, someone he constantly fought with but adored deeply.

He laughed when remembering a brawl they had in Antarctica that saw him storm off and tell Irwin they’d never work together again.

Upon arriving home, Lyons found Terri had sent him a pair of boxing gloves, thanking him for standing up to the TV star.

Australia Zoo however remains a painful reminder of the ‘cult-like’ atmosphere that has formed around the conservationist since his death.

‘Steve is still front and centre on their billboards. I see him weekly. You hear stuff about the kids all the time. It’s still a big part of my life. I’ve let it go but I still see it and hear it and think after all these years, there he is,’ Lyons admitted.

‘I love that what we created still exists today, I’m really proud of that. But I still feel sad and uneasy about what it turned into.’