Storm Christoph collides with UK: ‘Major incident’ is declared amid widespread flooding fears as Atlantic tempest begins three-day deluge with some areas braced for CONSTANT rain over next 48 hours

A major incident has been declared in South Yorkshire as Storm Christoph is set to bring widespread flooding, gales and snow to parts of the UK.

Britons are being urged to prepare as an amber weather rain warning was issued by the Met Office for Tuesday to Thursday for central northern England, affecting an area around Manchester, Leeds and Sheffield and stretching down to Peterborough.

It has led to a major incident being declared in South Yorkshire in preparation for potential flooding, said Ros Jones, mayor of Doncaster.

In a tweet, Ms Jones said emergency protocols were instigated on Sunday, with sandbags handed out in flood-risk areas. She said plans would run alongside the region’s Covid-19 response, adding: ‘I do not want people to panic, but flooding is possible so please be prepared.’

The Environment Agency described the combination of torrential rain and melting snow as a ‘volatile situation’, as councils prepare for possible evacuations should a severe flood warning be issued.

Keith Crabtree, lead flood warden for Todmorden in West Yorkshire, told BBC Radio 4’s Today programme the hilltops in the area are ‘absolutely saturated, so when the worst of the rain comes over later today it’s going to impact on the valley bottoms quite severely’.

He added: ‘It happens very quickly. The sirens that we have to warn people of flooding – 10 minutes, 20 minutes after those sirens go off, the flooding can be actually happening.

‘It’s likely that the impact will be bad for this afternoon.

‘We’ve got a couple of bad days where people are at high risk.’

Catherine Wright, acting executive director for flood and coastal risk management at the Environment Agency, said: ‘That rain is falling on very wet ground and so we are very concerned that it’s a very volatile situation and we are expecting significant flooding to occur on the back of that weather.’ 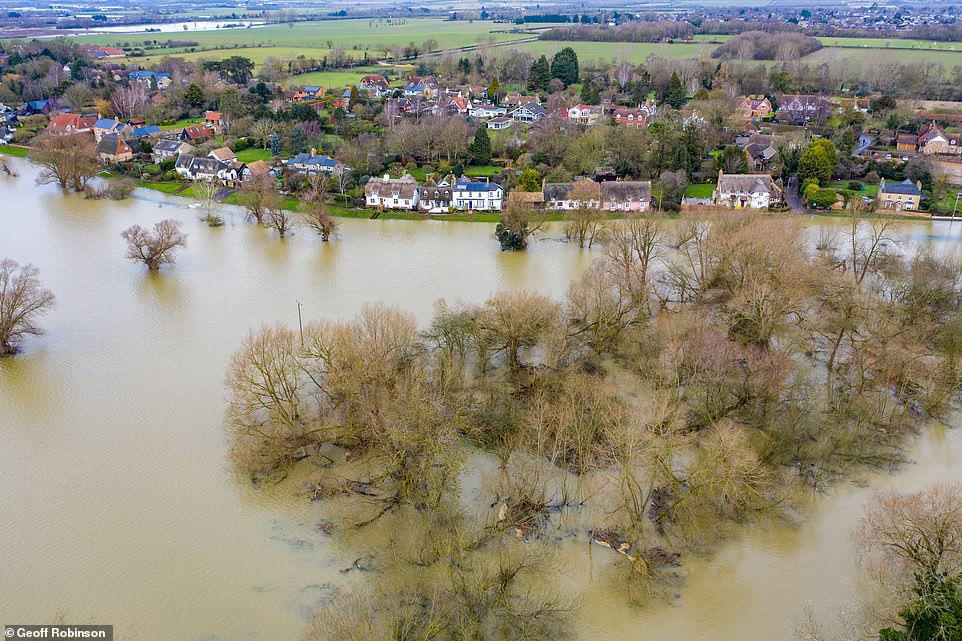 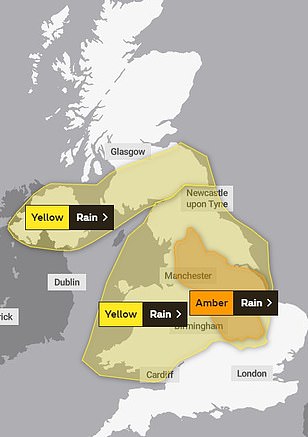 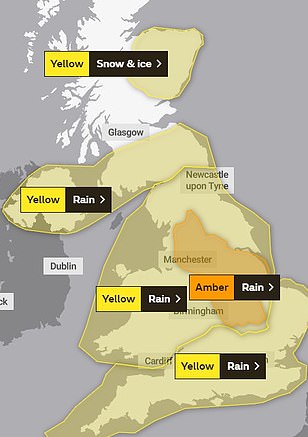 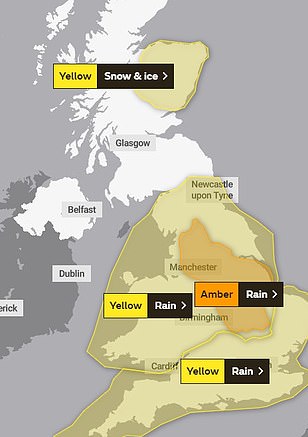 People are being urged to prepare as an amber weather warning for rain was issued by the Met Office for Tuesday to Thursday for central northern England, affecting an area around Manchester, Leeds and Sheffield and stretching down to Peterborough (pictured left to right: Weather warnings for Tuesday, Wednesday and Thursday)

She said the Environment Agency will be working with local authorities to help with evacuation efforts should a severe flood warning be issued, adding: ‘If you do need to evacuate then that is allowed within the Covid rules the Government has.’

Heavy rain is expected to hit the UK overnight on Tuesday, with the Met Office warning homes and businesses are likely to be flooded, causing damage to some buildings.

It issued a ‘danger to life’ warning due to fast-flowing or deep floodwater, while there is a ‘good chance’ some communities may be cut off by flooded roads.

Up to 70mm is expected to fall but in isolated spots, particularly in the northern Peak District and parts of the southern Pennines, 200mm could be possible.

A yellow rain alert is also in place for most of northern England and Wales from Tuesday to Wednesday, while a yellow weather warning for snow and ice is in force in Scotland from Dundee to Elgin and across the east coast from Wednesday afternoon until midday on Thursday.

The Environment Agency issued 10 flood warnings covering parts of Yorkshire, Cambridgeshire and Lincolnshire as of Monday night, with a further 109 flood alerts, meaning flooding is possible, across northern England, the Midlands and the east.

Highways England advised drivers to take extra care on motorways and major A roads, while the RAC breakdown service said motorists should only drive if absolutely necessary.