Student injured in shooting at UNC Charlotte to graduate on Saturday

A student who was injured during the deadly classroom shooting at the University of North Carolina at Charlotte earlier this month received her diploma during a graduation ceremony on Saturday.

Emily Houpt, 23, was injured when a fellow student at the school stormed a classroom on April 30 and opened fire on those inside. She’s the only one of the four students injured in the shooting to receive her diploma during the school’s graduation ceremonies this weekend. The other wounded students were Drew Pescaro, 19, Rami Al-Ramadhan, 20, and Sean DeHart, 20.

Houpt received a bachelors of arts degree in international studies.

“As we proceed with the recognition of graduates, we want to acknowledge the presence of one special new degree recipient, Emily Houpt, who was one of the students injured on April 30,” said Joan Lorden, the school’s provost and vice chancellor of academic affairs. “Emily, we are so glad that you are here today to receive formal recognition of your hard work in international studies and your contributions to the campus community.”

Ellis “Reed” Parlier, 19, and Riley Howell, 21, the two students killed by the gunman, received degrees in memoriam during Saturday’s two ceremonies. Howell’s family and girlfriend were called up to the stage during Houpt’s ceremony to receive his degree.

Howell was an environmental studies major who transferred to the school in 2018 and Parlier, who started school in 2017, was planning to major in computer science with the ultimate goal of becoming a game developer, according to ABC Charlotte affiliate WSOC.

About 5,000 students graduated in ceremonies held between Friday and Saturday, WSOC reported. During Friday night’s ceremony Chancellor Philip Dubois held a moment of silence and encouraged others to remain strong during a time of great pain.

“At the time, I ask that you join me in a moment of silence in memory of Riley and Reed and in thanks for the lives of our four injured students and countless others who were spared because of their sacrifice,” Dubois said, according to WSOC. “We, as Niner Nation, persevered.”

In an essay written by Adam Johnson, the anthropology professor whose class was targeted in the shooting, he said that the shooting took place early in the evening of April 30 while a group in the class was conducting a video presentation. 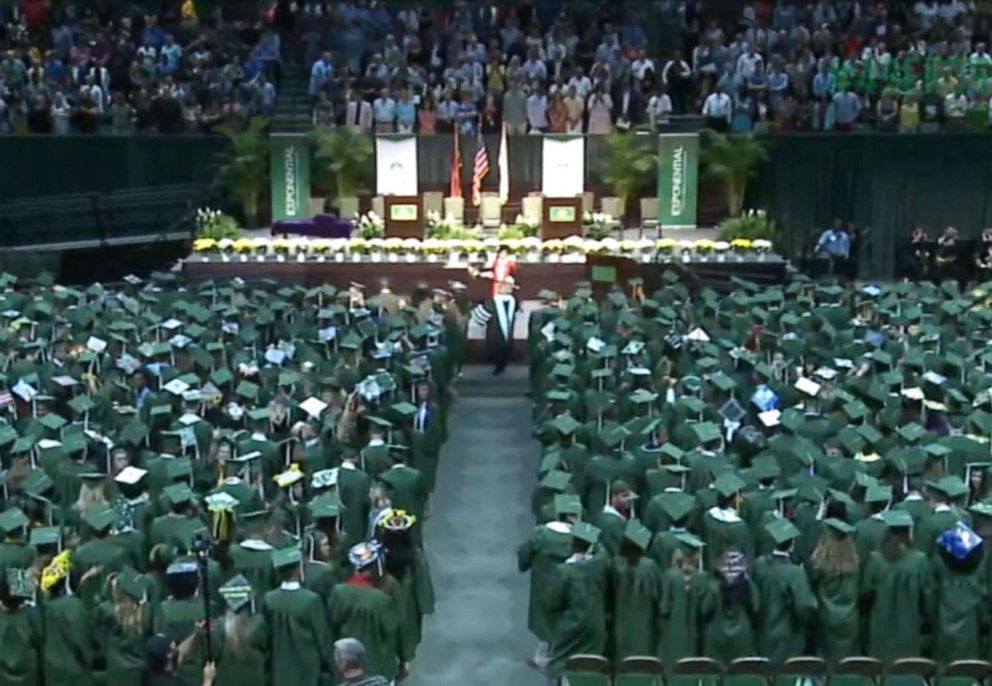 “We get about seven minutes into the video and without warning, earsplitting bangs ring throughout the room, off the glass walls, creating a terrible reverberation,” he wrote.

The shooter had been enrolled in Johnson’s class, he wrote, saying that while he was “engaged” in the class early in the semester, he soon stopped coming to class and eventually withdrew. It’s still unclear if there was a motive behind the gunfire.

Chief Kerr Putney of the Charlotte-Mecklenberg Police Department hailed Howell as a “hero” for charging at the gunman and taking him “off his feet … allowing officers to step in and apprehend him.”

He said that without Howell, “the assailant may not have been disarmed.”

“Unfortunately, he gave his life in the process, but his sacrifice saved lives,” Putney said.

Howell, who was taking ROTC courses at the university, was buried with military honors earlier this week.