Sweets, crisps and fizzy drinks will be sold under cigarette-style plain packaging under plans revealed today.

To combat the obesity epidemic, Cadbury, Walkers Crisps, Coca-Cola and other major brands would be forced to abandon their vibrant designs.

Instead they would be compelled to use a uniform drab design intended to put off consumers. This would be in line with the greeny brown colour – chosen for its ugliness – seen on cigarette packs. 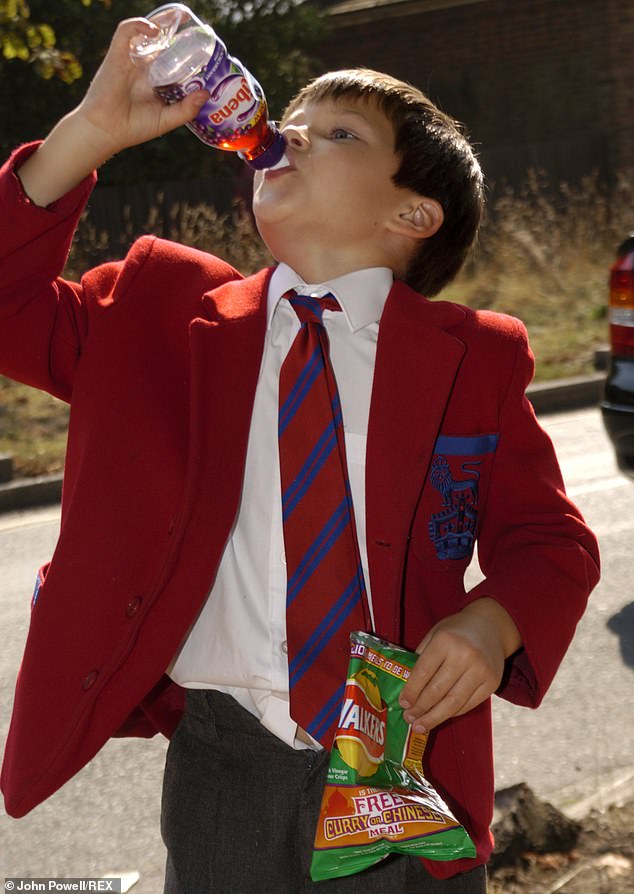 To combat the obesity epidemic, Cadbury, Walkers Crisps, Coca-Cola and other major brands would be forced to abandon their vibrant designs. Instead they would be compelled to use a uniform drab design intended to put off consumers

The plans were backed last night by Dame Sally Davies, England’s Chief Medical Officer, who wants them to form part of her anti-obesity review. She said: ‘These proposals learn lessons from tobacco control and have potential to be part of the solution to the obesity crisis.’

Simon Stevens, who is chief executive of the NHS, said last week that obesity was becoming the ‘new smoking’.

The proposals from the Institute for Public Policy Research, an influential think-tank, also include:

Health campaigners made a separate call last night for cartoon characters to be banned from packs of junk food aimed at children.

They cited a study that found half of 526 food and drink products using cartoons are needlessly high in fat, saturated fat, sugar or salt.

The IPPR says schools could be provided with the free fruit and veg from so-called ‘wonky’ produce rejected by big supermarkets. This could cost £300million a year.

It adds that plain wrappers and TV advertising restrictions on unhealthy food and drinks would reduce heart attacks and diseases such as diabetes and cancer. Plain packaging would put such products ‘on a level playing field with unbranded fruit and vegetables’. The authors believe this would encourage shoppers to buy an apple or banana instead of a Twix, Mars bar, Kit Kat, crisps or Doritos.

Critics of such measures as the sugar tax say they hit the poor unfairly and represent ‘nanny state’ meddling.

But the IPPR points out that curbs on tobacco adverts, plain packaging and a crackdown on smoking in public places have slashed the numbers of smokers. They claim similar action would cut the numbers consuming too much sugar.

Under existing laws, cigarettes must be sold in standardised green packaging bearing graphic warnings such as SMOKING KILLS. The IPPR report does not suggest similar stark warnings about the dangers of eating too much sugar, but some may conclude it could be the next step. 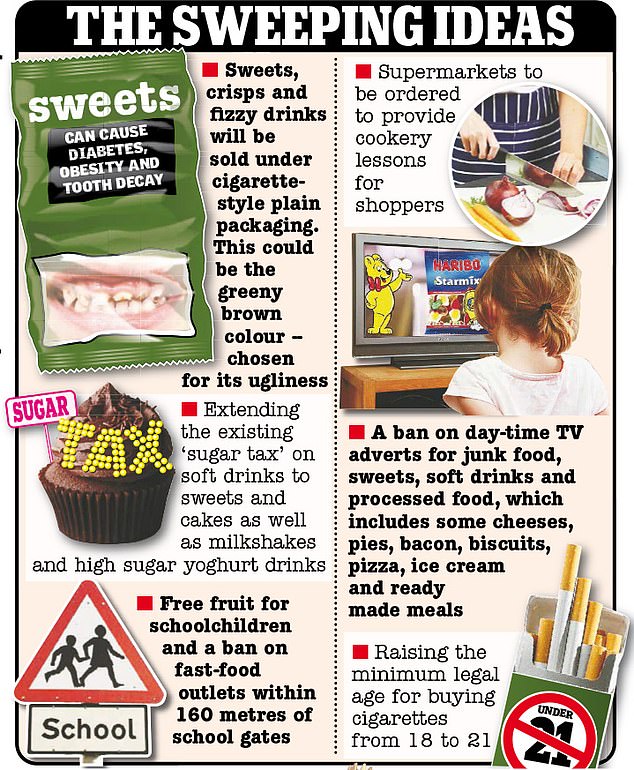 Pressure for a sugar tax on sweets and cakes follows the imposition of the tax on sugary drinks last year that put the price up by between 18p and 24p a litre – 8p for a can of Pepsi. It raised more than £150million for the Treasury in its first six months.

The report does not say how the sugar tax would affect the price of sweets and snacks.

But if levied at a similar rate to the tax on sugary drinks it could mean an 8p rise in the price of a chocolate bar or bag of crisps. An increasing number of health experts say such measures are essential to tackle the obesity crisis.

Health Secretary Matt Hancock, who is bidding to be Tory leader, has vowed to tackle the issue and suggested parenting classes to combat child obesity. Treasury minister Liz Truss mocked tax hikes or curbs on sweets and fast foods as ‘neo-Puritanism’.

The IPPR says the TV ban on junk food ads would apply up to the 9pm watershed; income from the new sugar levies would be used to build sports centres; and community cooking lessons would be funded by a levy on supermarket profits.

Tom Kibasi, IPPR director, said: ‘It’s time to end the pro-obesity supermarkets by putting fruit and veg on a level playing field with crisps and confectionery. Plain packaging would reduce the hassle of “pester power” for busy parents.’

The report states: ‘We must reduce the visibility and availability of harmful food products whilst increasing relative cost.’

It says the Government ‘must intervene to shape the social and commercial determinants of health. We have done this effectively for smoking and alcohol through high levies and regulations on sales and advertising. We have made less progress on obesity, food products and exercise’.

It adds: ‘Advertising is rife, with up to £143million spent on adverts for crisps, confectionery and sugary drinks. Junk food can be purchased by anyone regardless of age. There is no restriction in what can be sold in the vicinity of schools.’

Dame Sally has said she aims to halve the levels of childhood obesity by 2030. More than 20,000 primary school children were classed as obese when they left school last year.

‘I want parents to be incentivised to buy healthy food,’ she said. ‘We need to make sure that fresh fruit and vegetables are cheap. Maybe we have to subsidise them by charging more, by taxing unhealthy food. Parents are then nudged to buy the healthy version because it’s cheaper.’ 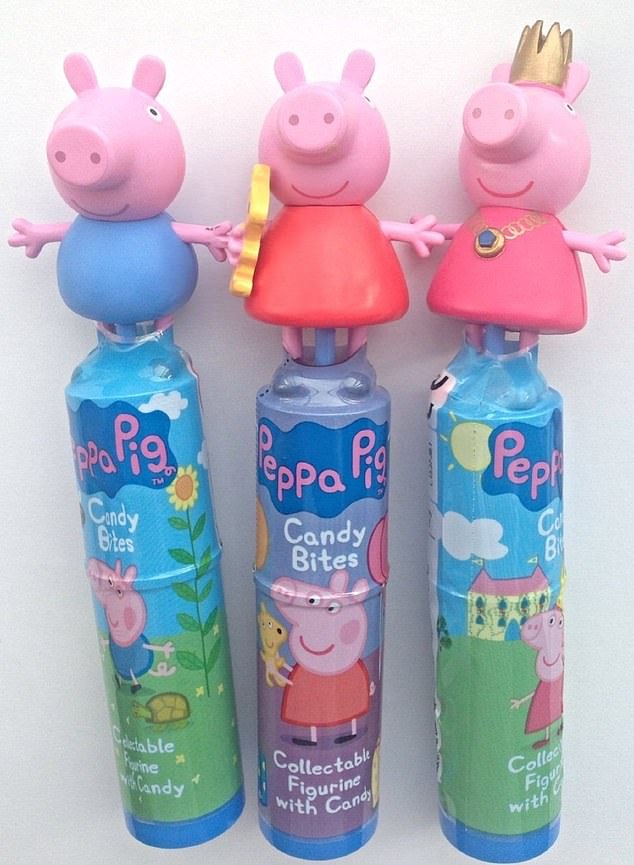 The call for action over cartoon characters was made by Action on Sugar, Action on Salt and the Children’s Food Campaign.

Their study found that some products using popular TV and film characters, for example, Peppa Pig Candy Bites, are 99 per cent sugar.

Dr Kawther Hashem, of Action on Sugar, said: ‘It’s shocking that companies are exploiting the health of our children by using cartoon characters on their high sugar food and drink products, particularly on chocolates and sweets, which are already hard to resist for children.’

But Andrew Opie, of the British Retail Consortium, said: ‘All foods, when consumed in moderation, can play a part in a healthy diet.

‘In accordance with recommendations by the Chief Medical Officer, all major supermarkets provide clear traffic-light nutritional labelling on the front of their own brand products to allow consumers to make an informed choice about the food they buy. We believe banning all cartoon characters would be an unnecessarily heavy-handed approach.’

Tim Rycroft, of the Food and Drink Federation, said manufacturers were playing their part in tackling obesity.

He added: ‘Companies have been voluntarily reformulating their products to reduce sugar, calories, fat and salt, as well as limiting portion sizes.

‘The rules on advertising to children have been voluntarily tightened and extended; and many new healthier options have been developed.’

‘We must stop destroying the lives of our children’

For the past 30 years, I’ve worked as a cancer surgeon in the NHS and I know prevention is better than cure. Just ask any patient or their family.

Far too many people attending St Mary’s Hospital in central London, where I work, could have avoided the trauma and upset of ill health if we’d intervened earlier to help them lead healthier lives. That is heartbreaking.

We now know more than ever before about what causes cancer – from tobacco to red meat. Yet we still have a national sickness service, not a national health service. It’s still too easy to be unhealthy, and too hard to make the healthier choice.

Today, as many as two in five NHS patients wouldn’t need our help if they had led healthier lives. The cost of illness arising from poor diets, too much alcohol and smoking tobacco costs the NHS in England more than £11billion a year. As our society ages, we can’t afford to go on like this.

But the biggest challenge is obesity. Childhood obesity continues to rise. While obesity rates in middle-class communities are falling, obesity rates are rising for the poorest kids. It is a national scandal that we now see cases of children with diabetes caused by obesity.

It is good that the Government and the NHS have said that prevention is a top priority. Health Secretary Matt Hancock has said it’s the best hope for a ‘happier, healthier future’. But our policies must now go much further than ever before.

That’s why I’ve been working with the Institute for Public Policy Research to come up with a fresh plan to tackle the public health crisis head on.

Our plan says that we need dramatic action across society. It simply isn’t good enough to keep repeating the old mantra of individual responsibility when we face a public health emergency. The blame culture might feel good for some, but it isn’t working. We need a smarter approach. We need to make it easier for people to make healthier choices. It’s time to make doing the right thing the right thing to do.

There’s little point preaching about individual responsibility when high streets are stuffed full of junk food outlets. In the poorest communities, there are up to five times as many fast food outlets as in wealthier areas. The food industry spends 30 times more money trying to get people to eat food that’s bad for their health than the Government spends promoting healthy eating. The supermarkets promote highly processed foods – laced with sugar, fat and salt – at ultra-low prices. When the food industry spends millions to persuade us to eat poorly, it’s nonsense to pretend this is just about individual free will.

We need to tackle obesity just like we took on smoking. Smoking rates have more than halved over the past 50 years and we need to similarly cut obesity rates.

In the IPPR plan, we propose introducing plain packaging for all chocolate, sweets and other confectionery along with crisps and sugary drinks. This would put it on a level playing field with fruit and vegetables, which usually have limited branding with see-through packaging – and so would reduce temptation for shoppers, especially children, attracted to the bright colours and images of cartoon characters.

More than that, it would make the millions spent by corporations such as US giant Kraft (owner of Cadbury) simply pouring money down the drain.

Plain packaging would begin to change the behaviour – and the scale – of the sugar industry, just as our measures against smoking have had an impact on the tobacco industry. To support this further, we should stop companies advertising unhealthy foods on TV, especially those aimed at children, before the 9pm watershed.

At the moment, a staggering 4.5million tons of ‘wonky’ fresh fruit and vegetables are wasted every year for cosmetic reasons. These should be given to local schools to provide free fruit and vegetables for pupils. We want to help people to cook healthy meals at home, so we also propose a new levy on the profits of the largest supermarkets to fund the provision of community cooking classes.

As our politicians argue constantly about Brexit, they’ve ignored the health of the nation. For two decades, preventable illness and deaths declined. But as the IPPR has shown, this progress stopped in 2012.

If we had maintained it, then some 130,000 deaths could have been prevented. We don’t need nannying – but we do need a return to eating what our grandparents would have recognised as ‘real food’, not eating too much of it, and to a diet with more fruit and vegetables and less highly processed junk.