Stockholm: Lawyers representing victims of chemical weapons attacks in Syria filed a criminal complaint with Swedish police on Monday, calling for an investigation into the role of officials in President Bashar al-Assad’s government.

Allegations of war crimes can be investigated by Swedish police regardless of where they were committed.

Similar legal actions, taken by groups such as Civil Rights Defenders, the Syrian Centre for Media and Freedom of Expression, Syrian Archive, and the Open Society Justice Initiative on behalf of victims have already been launched in Germany and France. 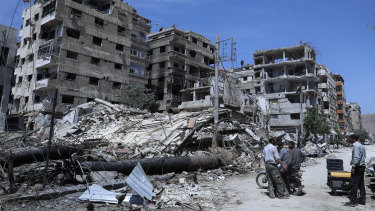 People stand in front of damaged buildings, in the town of Douma, the site of a suspected chemical weapons attack, near Damascus, Syria. Credit:AP

“The groups call on Swedish judicial authorities to open an investigation into these attacks, so that Syrian officials responsible for these war crimes can be put on trial under the principle of universal jurisdiction,” the groups behind the legal action said in a statement.

The Syrian government denies ever using chemical weapons against its own civilians in the course of conflict with rebel forces. The conflict, which began in 2011, has largely subsided with Assad having regained control of most key territory with Russian and Iranian military support.

According to the complaint, the Syrian government used chemical weapons in attacks on the opposition-held towns of Ghouta in 2013 and Khan Sheikhoun in 2017. Hundreds of civilians, including children, were killed. 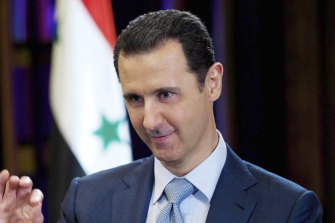 Syrian leader Bashar Assad has presided over a 10-year war.Credit:SANA/AP

“In the ten years since the first assaults on pro-democracy protesters in Syria, the government has used chemical weapons more than 300 times to terrorise the civilian population,” said Steve Kostas, a lawyer at the Justice Initiative.

“Swedish authorities can join their counterparts in France and Germany to jointly investigate the use of chemical weapons in Syria and demonstrate that there will be no impunity for the perpetrators of these crimes,” he said in a statement.

A UN-commissioned investigation to identify those behind chemical attacks in Syria concluded in 2017 that Syrian government forces had used chlorine and sarin gas.

The first trial of suspected members of Assad’s security services for crimes against humanity, including torture and sexual assault, began in a German court in April 2020.