Washington: The best most teenagers hope for from a summer internship is some work experience, beer money and perhaps a good reference.

He was only on his third day as an intern at NASA's Goddard Space Flight Centre when he made the find. 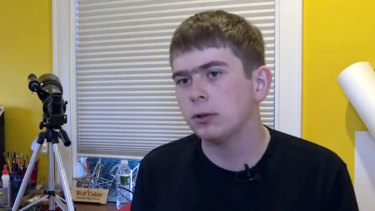 Wolf Cukier, a 17-year-old high school student from New York, who discovered a new planet while interning at NASA.Credit:Screengrab/CBS

He had been trawling through satellite images flagged by members of the public where the brightness of a star seemed to temporarily dip.

Then he spotted something different. An object appeared to be moving in front of the star, blocking its light. It turned out to be a planet.

"That's what I noticed at first," Wolf explained to CBS New York. "It was like, oh… there's something here that was cool."

Flagging what he saw to his supervisors, over the coming days his more experienced colleagues grew in confidence that Wolf was right – he had found a planet. 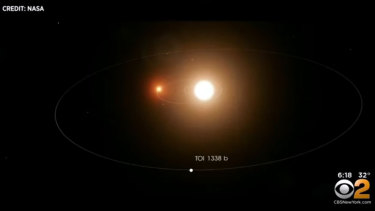 TOI 1338 b was discovered by Wold Cukier a 17-year-old NASA intern.Credit:Screengrab/CBS

More unusually, the planet which is nearly seven times larger than Earth, orbits two stars, going around them once every 95 days.

It was the first time the program he was working on, called the Transiting Exoplanet Survey Satellite (TESS), had discovered a planetary system with two stars. The find back in June was so significant that Wolf co-authored a paper with other scientists from a number of different US universities, which is being submitted to an academic journal.

It was the second time Cukier had interned at the space research laboratory, having spent the summer of 2018 working on a Goldilocks Zone project.

This time he was placed under the tutelage of NASA research scientist Veselin Kostov who never had a high school intern, Kostov told The Washington Post.

"I gave him a brief outline of what we do, and he learned everything by himself," Kostov said. "He learned really quickly. He really developed a very good understanding of the field."

The discovery featured at a panel discussion during the 235th American Astronomical Society meeting in Honolulu on Monday.

"There are PhD candidates who would die to have the type of opportunities that Wolf has lucked into in this internship," Beth Cukier, his delighted mother told CBS New York. "It was an amazing, cool bit of serendipity."

Experts have since explained that discoveries like this one are easier to make by sight rather than through utilising computers.

Veselin Kostov, the lead author on the paper and a research scientist at the SETI Institute and Goddard, said: "These are the types of signals that algorithms really struggle with.

"The human eye is extremely good at finding patterns in data, especially non-periodic patterns like those we see in transits from these systems."

As for what comes next, Wolf needs to finish his last year at high school first. Then he hopes to study physics or astrophysics at either Stanford, MIT or Princeton.

And after that, it could be back to NASA. "Future research would involve finding more planets," Wolf said.