Tales of heroism started to emerge from Tennessee this week after recent catastrophic flooding that resulted in deaths as well as people unaccounted for.

The stories include those of a U.S. military veteran who died after saving his family members, a helicopter pilot who saved residents who were trapped on their rooftops, and a pair of brothers using a jet ski to rescue neighbors.

In Waverly, one of the hardest-hit communities, Rachel Reeves spoke about her father, a veteran who she said spent the final moments of his life saving family members from raging floodwaters.

Joseph Reeves helped get his wife, who has stage 4 cancer, and Rachel’s 18-year-old sister to safety before the floodwaters took him, she told FOX 17 of Nashville. He managed to open the door of their home as water accumulated inside, she said.

“Without my dad holding that door for them to get to safety, they would’ve never got that door open,” Rachel Reeves told the station.

“My dad was able to pull the door open and hold the door open for them to get out,” she added. “And I just think it took so much energy from him and somehow a miracle from God, they [mother and sister] went on the right side of the current, but they all got separated.”

Prior to her father saving his family members, they were telling each other how much they loved one another in case the worst was to happen, Rachel Reeves told the station.

Since her father died, she told FOX 17, the family has been overwhelmed by the support they have received from the community.

Also in Waverly, about a dozen residents left stranded on their rooftops received help from a helicopter pilot from Nashville, FOX 17 reported. 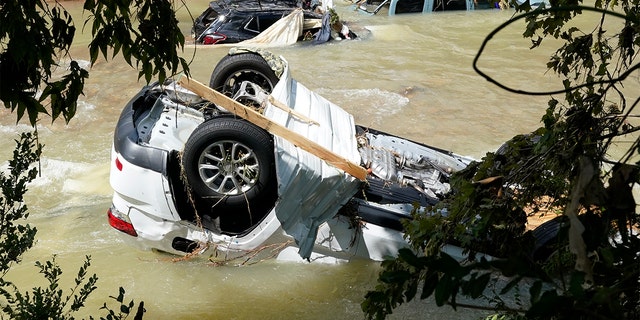 Joel Boyers of Helistar Aviation said he flew west to Humphreys County to see if there was any way he could help.

“Just as I popped over the hill I saw the whole town engulfed in water. There were two houses in fire, fire trucks everywhere,” Boyers recalled.

Some of Boyers’ rescues were captured on video by people down below and posted on social media, FOX 17 reported.

The pilot described the conditions of some of the people he assisted.

Boyers told FOX 17 he wouldn’t be able to live with himself if he hadn’t gone out and tried to provide help.

Mark and Brian Bohanon are brothers who used a jet ski to reach Waverly flood victims in distress, FOX 17 reported.

Part of their effort was captured on video by Amanda Maples, who said the brothers helped her mother.

“I want everyone to see how these two men, along with so many, risked their lives to save others,” Maples told FOX 17. “Mark and Brian Bohanon, you are heroes! Our family forever thanks you!”

Over the weekend, more than 17 inches of rain fell in Humphreys County over 24 hours, setting a new mark for rainfall in the area, according to FOX 17.

The flooding caused at least 18 deaths in the area, with search crews continuing to look for three missing people, the station reported.