Terrifying moment shark appears to bite diver’s head off… but is all as it seems?

THIS terrifying photo shows a giant tiger shark about to bite a swimmer's entire head off.

But not all is as it seems as the diver seemingly stuck between the predator's jaws was unharmed and is alive and well. 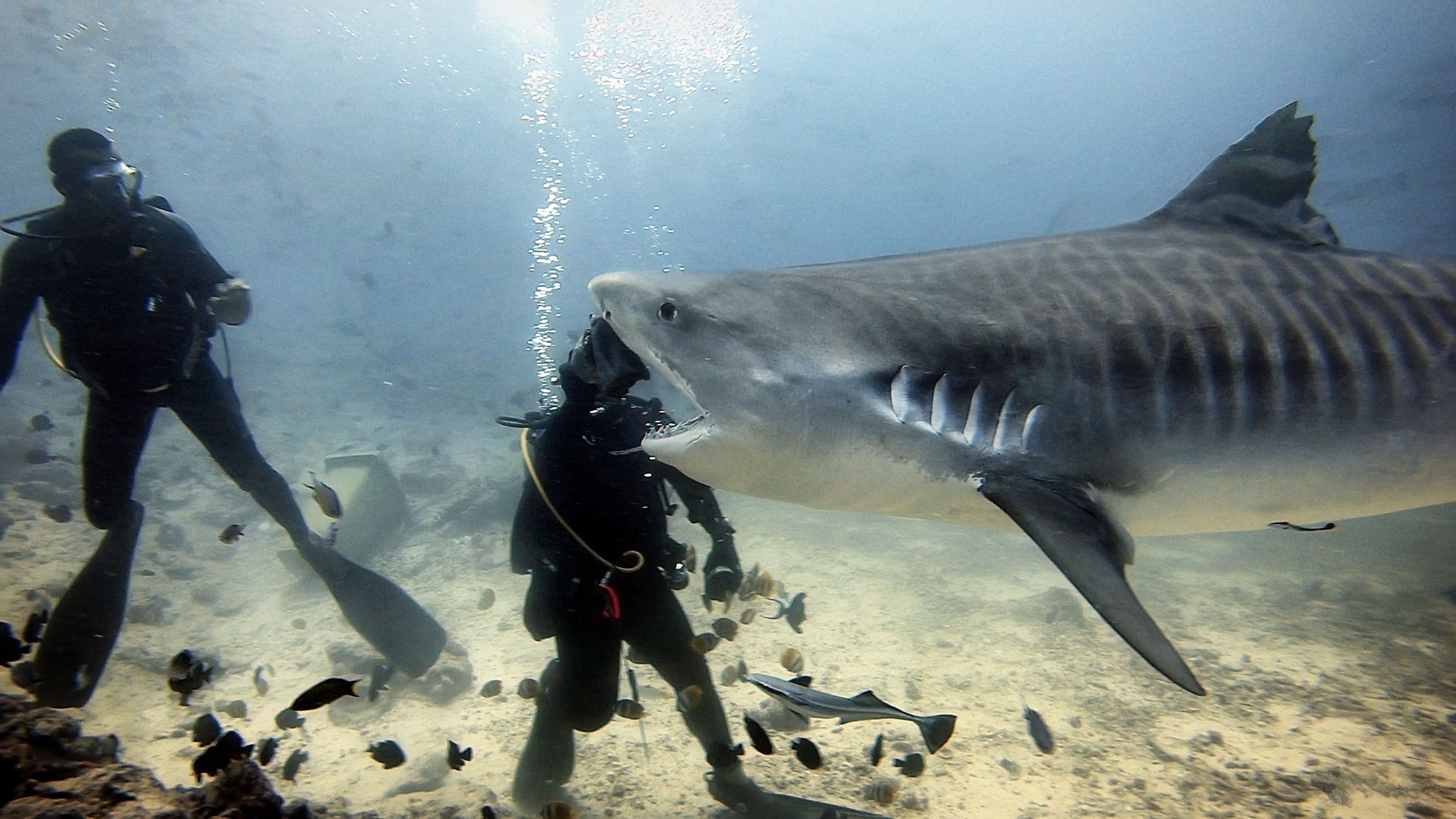 The perfectly-timed photo shows a three-metre-long tiger shark with a gnarly dorsal fin gliding past the diver displaying its sharp teeth.

It was taken just as a diver fed the tiger shark a tuna fish, sharks which are known to attack humans.

He stands behind the massive predator from safe distance, the diving group tempting it with snacks in order to get a close-up look at it.

Staying close to his diving instructor, Koh, from Singapore, says he was quickly surrounded by various species, including lemon sharks, bull sharks and blacktip sharks.

Despite some sceptic social media users claiming the shot was edited, Koh is adamant that it wasn't altered post-production and is just a perfectly-timed photo.

Koh said: "It was especially exhilarating and a little intimidating when the big ones came in close to check us out.

"Despite knowing it was just from the angle and perspective of the photo, I was so happy with how it came out.

"It really did look like the shark was about to bite the diver's head.

"I also thought it looked like it was getting ready for a dentist’s check-up.

"Of course there are inherent risks involved which one must understand and accept before embarking on such dives.

HOW DEADLY IS THE TIGER SHARK?

While sharks are on the whole less aggressive than commonly believed, the tiger shark is one of the few species known to attack swimmers and surfers unprovoked.

They are one of the "Big Three" aggressive shark species, along with great white sharks and bull sharks.

This is for a number of reasons.

First, they are large and strong, capable of growing to five metres in length, making them easily able to overpower a human in the water.

Second, they have sharp teeth designed to shred their prey, meaning that when they do attack, the damage they inflict can be devastating.

Third, they spend most of their time in waters where humans swim, making the chance of encountering one greater than for species that live in deeper waters.

Of 111 recorded tiger shark attacks, 31 were fatal, putting them second only to the great white in terms of how many people they have attacked and killed.

The species is notable for having the widest food spectrum of all sharks, with a range of prey that includes, crustaceans, fish, seals, birds, squid, turtles, seasnakes, dolphins, and even smaller sharks.

It is considered a near-threatened species due to fishing and finning by humans.

"It's important not to blame an animal if an accident happens.

He added: "I don't know why anyone would think the photo was edited.

"The tiger shark was just a few metres away and it was huge in the water in front of me.

"There are tons of people who have done that dive before and they can also attest to how close the sharks get."

Koh's photo was taken in October 2018 but has only just been uploaded to social media, with most commenters calling it an "excellent shot", while one commenter doubted it authenticity.

One commenter said: "Looks like one second before the diver loses his head."

Another joked: "You have zero cavities today sir. Shirley will see you out and set you up for your next appointment."

One person wrote: "When perspective makes the shot-excellent pic." 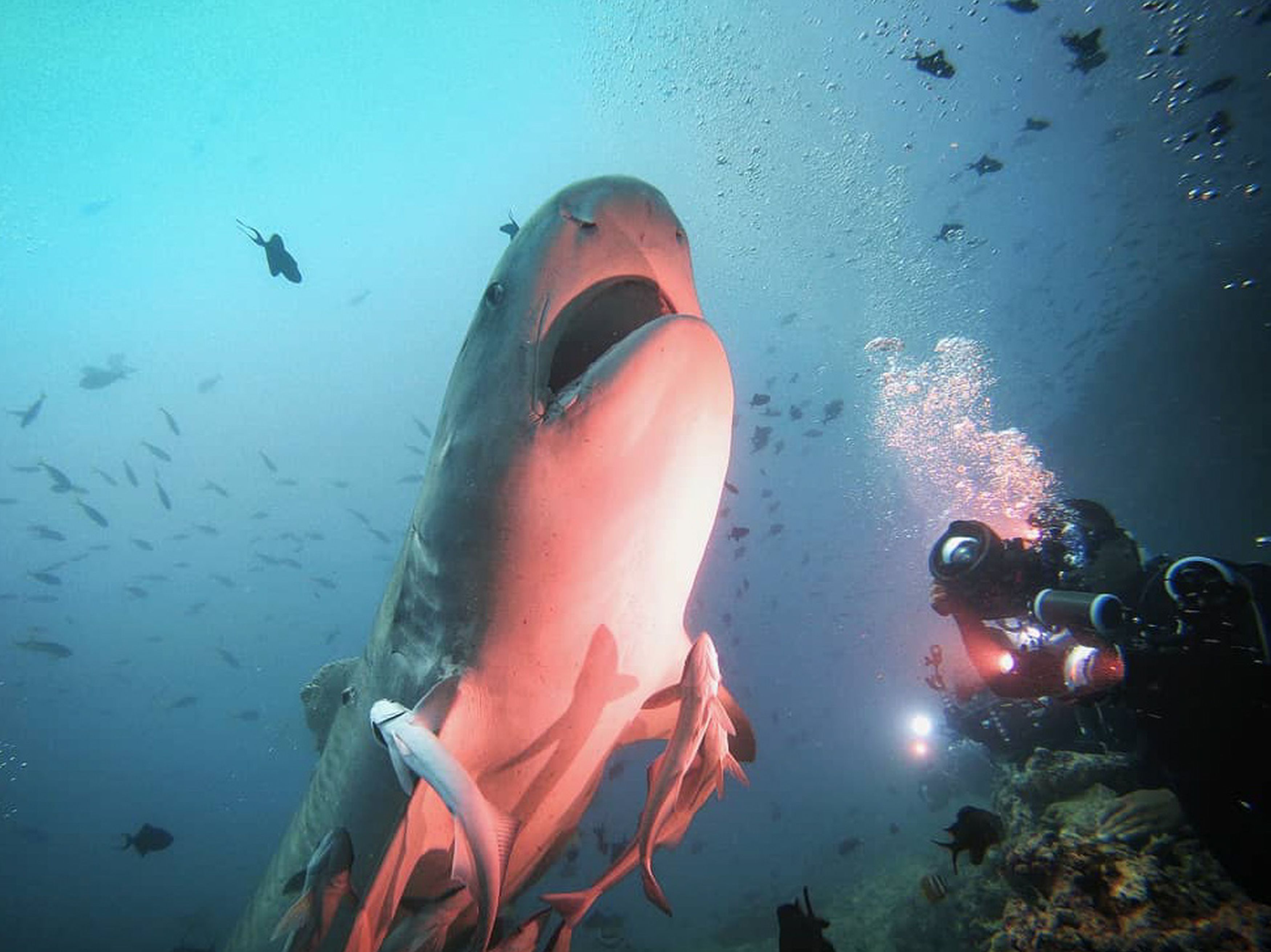