The bromance is back! Obama and Trudeau enjoy a beer and a ‘catch up’

The bromance is back! Obama and Trudeau enjoy a beer and a ‘catch up’ together as they meet at an Ottawa brewery for a pint

Barack Obama and Justin Trudeau’s ‘bromance’ is back after the pair were pictured enjoying a beer and a ‘catch up’ in an Ottawa brewery.

The former president met with the Canadian Prime Minister at the Big Rig Brewery on Friday during a trip to the country.

Trudeau shared a picture of the two on Twitter on Saturday morning, and the Big Rig Brewery posted several images of the meeting on its Instagram page.

It’s not clear what the two men discussed but Trudeau, 47, later tweeted: ‘Always great to catch up, @BarackObama.’

He finished his message with ‘À la prochaine!’ which translate to ‘until we meet again’.

Big Rig Brewery posted several images of the meeting on Instagram, writing: ‘Yesterday was a good day. What an honour it was to have @justinpjtrudeau and @barackobama stop by our brewery. Our doors and taps are always open. Cheers!

‘Thanks again to @justinpjtrudeau @barackobama and their amazing team for spending some time with us. It definitely made our day!’ 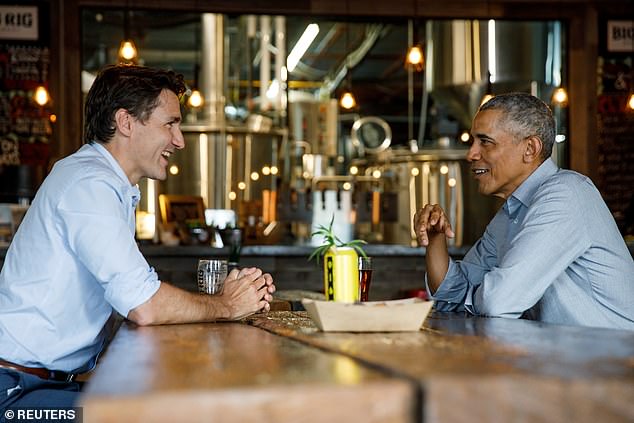 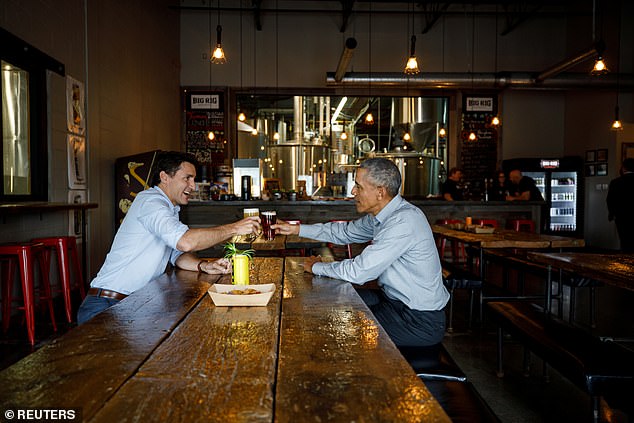 Obama later spoke to an audience of about 12,000 people at an event hosted by the progressive think-tank Canada 2020

Trudeau drank the brewery’s Alpha Bomb IPA, while Obama opted for the Canadian Amber, according to The Huffington Post.

Sophie Prescott, event and social media manager at Big Rig Brewery told the website: ‘Yesterday was about friendship and respect — two friends catching up over a beer.

‘It was an incredible day, and we’re happy to provide them with a cool spot to just hang out and have a pint.’

The pair have had a famously close relationship with Obama dining with Trudeau at Liverpool House in Montreal in 2017.

In 2016 the pair were spotted laughing and joking in Canada’s parliament.

Obama, 57, was in Canada to speak about life after his presidency.

He told a crowd of thousands that he is ‘a little bit of a love affair with Canada,’, CBC reports.

President Trump is currently trying to pass the United States–Mexico–Canada Agreement to replace the he North American Free Trade Agreement.