The Crown in transition: An ailing Queen, exiled Prince and shrinking realm

London: On her 21st birthday, the then Princess Elizabeth made a promise to the Commonwealth that she has never allowed herself to forget.

Through a crackly radio address from Cape Town, nearly 10,000 kilometres away from Buckingham Palace, the heir to the British throne issued a lifelong pledge.

“I declare before you all that my whole life – whether it be long or short – shall be devoted to your service and the service of our great imperial family to which we all belong,” she vowed. 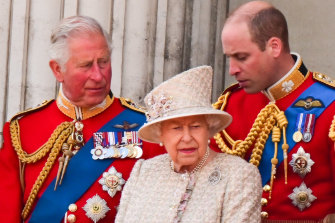 Period of transition: The Queen with her son Prince Charles and grandson William. The Prince of Wales and William held a summit to decide the future of the monarchy over the next two generations following the death of Prince Philip in April 2021.Credit:Getty

Three quarters of a century later and celebrating her 96th birthday next month, the Queen publicly reaffirmed that pledge this month. But, as she pointed out recently with her trademark understated humour, she can no longer promise to do it “in-person”.

During a royal engagement at Windsor Castle last month, while using a walking stick, she told visiting military officials: “As you can see, I can’t move”.

After months of murmurings and mixed messages about her health, it was the first real concession of her reduced mobility. And in the weeks since, more details have slowly emerged about her frailty.

It was supposed to be her year. Her time in the spotlight. As the first British monarch to celebrate 70 years on the throne – her Platinum Jubilee.

While grateful Britons, having endured a few rough years, will throw street parties and line the streets in their millions during four days of official celebrations in June, there is a real sense that a tectonic shift within the family is now playing out in full view.

As veteran royal commentator Robert Jobson, of London’s Evening Standard, describes it: “She’s still the chairman of the board, but Charles is now the CEO of The Firm”.

Jobson says the Queen’s wish that her daughter-in-law Camilla, the Duchess of Cornwall, be crowned Queen Consort when Charles eventually ascends to the throne shows this.

“She fully appreciates the Crown is in transition, and it is right to lean more and more on her son, Charles, and grandson, William, as well as on the wider family,” Robson says.

“The Prince of Wales is now widely respected as a dignified royal patriarch. He is an unselfconscious, accomplished and respected global figure who has emerged from the long shadow of his father.” 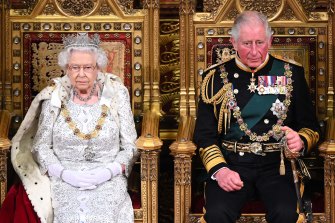 Queen Elizabeth II and Prince Charles during the state opening of the British Parliament in 2019. We’ve been seeing more of him and less of the monarch in recent weeks.Credit:Getty

He says the prince has been doing a lot of the heavy lifting in the past few years as his mother’s team of assistants work hard to shape her diary to reflect her age.

Charles, says Jobson, spends the night at Windsor Castle to have supper with his mother whenever his now busy schedule allows him.

“The Queen… wants Charles to be kept up to speed with all confidential state matters, so that the transition is as smooth as possible should anything happen to her,” he says.

The Prince of Wales and his son held a summit to decide the future of the monarchy over the next two generations following the death of Prince Philip in April 2021.

“Charles has been meeting ministers for years and been receiving confidential cabinet papers for decades. He is the most well-prepared monarch-in-waiting ever,” Jobson says.

While the Queen has good days and bad, she is said to be so frail that she’s been unable to walk her precious corgis for the past six months. A $40,000 wheelchair-friendly lift has been reportedly installed at Craigowan Cottage on the Balmoral Estate in Scotland, where she is expected to spend more time amid reports she will no longer live at Buckingham Palace.

Having missed this month’s annual Commonwealth Day service for just the second time in more than 50 years, the Queen’s aides say she still hopes to attend a memorial service for Philip, her late husband, the Duke of Edinburgh, on Tuesday almost a year since his death. 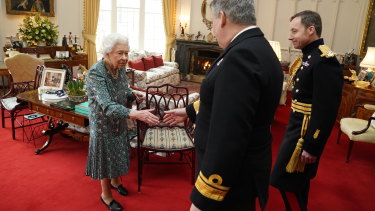 Queen Elizabeth speaking with Rear Admiral James Macleod (right) and Major General Eldon Millar at Windsor Castle on February 16. While using a walking stick, she quipped: “As you can see, I can’t move.”Credit:Getty Images

Her attendance is expected to be “tightly managed” behind the scenes, royal sources have told the British press last week, with staff said to be considering how the Queen can best travel to the service in comfort, and make her way into Westminster Abbey without being photographed having difficulty walking.

If she does make it, she will enter before any other guests in a complete break from tradition where it is customary that she is the last to enter. It is expected to happen without “drama or grand gestures”, according to reports.

Prince Harry, who is barely on speaking terms with his father, Charles, and brother William, over his decision to quit royal duties in 2020, won’t be in the congregation.

He is currently involved in a messy legal battle in an attempt to overturn a government decision not to provide police protection for him and his family when they are in the UK. His family is growing increasing anxious about his tell-all memoir which will be released later this year.

The situation which has basically led to him living in a self-imposed exile with wife Meghan and their family in Los Angeles, along with the fallout over Prince Andrew’s friendship with the late American paedophile Jeffrey Epstein and the civil sex abuse case involving Virginia Giuffre, is also said to have taken its toll on the Queen.

But world leaders and officials, who continue to meet with her both in person and virtually, stress she remains as mentally sharp as ever. So don’t expect to see her being pushed around – either figuratively or literally. Buckingham Palace is said to harbour lasting regret over allowing a photograph of her late sister, Princess Margaret, appearing frail in a wheelchair to be taken in 2001, six months before she died.

Penny Junor, a royal biographer, says despite her age and reduced mobility the Queen remains “extraordinary”.

She is the longest-living and longest-reigning current monarch and longest-serving female head of state in history.

“She has gone on with great vigour for years but we have to remember she is 95 and not superhuman,” Junor says. “In other respects, she is in great form. The Queen is fantastic on Zoom calls, but I think events where she is required to walk or go up steps are not going to be feasible any more.”

Another turn which is said to have saddened her is the latest wave of republicanism throughout the Commonwealth realms.

Last week’s tour of the Caribbean by William and wife Catherine, the Duchess of Cambridge, has not slowed the momentum. Now Jamaica wants to remove the British monarch as its head of state while its leaders demand a formal apology and slavery reparations. 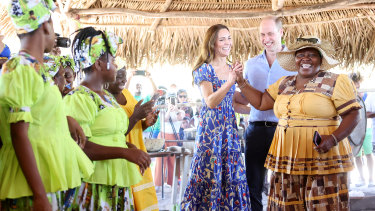 Copping flak: The Duke and Duchess of Cambridge dance during a traditional Garifuna festival in Belize on the second day of their Platinum Jubilee Royal Tour of the Caribbean on March 20.Credit:Getty

The calls followed them across Belize and the Bahamas too, overshadowing a trip which the Queen has hoped would strengthen the Commonwealth and discourage other countries from following Barbados’s example in becoming a republic. Of the 32 countries where the Queen has acted as sovereign during her 70-year on the throne, 14 remain after the decision by Barbados to remove her as head of state last year.

William attempted to address anti-colonialist attacks in a speech in Jamaica, expressing his “profound sorrow” for slavery which “should never have happened”, but it has been met with calls for the British monarchy to fully reckon with its legacy of slavery and colonisation. Some critics in Britain believe the tour was misjudged.

“Once the Queen is gone, I suspect the Commonwealth will be finished. This Caribbean tour seemed patronising and outdated,” royal biographer Anna Pasternak told London’s Telegraph.

“Kate and William dancing and drum-beating was excruciating. I don’t think that the Cambridges can turn it around, because a thirty-something apologising for slavery just doesn’t land well.” 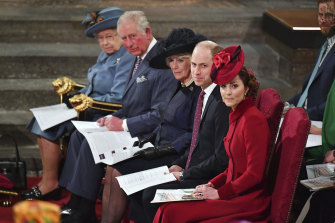 Jobson agrees no matter how popular the Cambridges are on the road, it is now inevitable that more nations with sever ties with the monarch.

“But the transition of the Crown – and what monarchy stands for – is clear,” Jobson says. “The official line is, and always has been, that the Queen believes the decision on whether she reigns in any of the realms lies with the people.”

In Australia, the election of a Labor government in May would likely again stoke republican debate, however it would be unlikely to be addressed until after her death.

And planning for that occasion, no matter how macabre, is well underway. Charles will live in a “flat above the shop” in Buckingham Palace, The Mail on Sunday recently reported, when he becomes King.

But the iconic residence, which is undergoing a massive $700 million renovation, will be opened up to visitors all year round instead of occasionally.

The heir to the throne is also said to be considering transforming Balmoral into a museum to the Queen.

But Junor says the Queen still feels there’s life in her yet.

“I think she enjoys what she does and, so long as she is fit enough, she will carry on doing light duties,” she says.

For now, conscious of that 75-year-old promise, the Queen will just keep on keeping on.