When it comes to political theatre there's little to rival the spectacle of the US presidential debates every four years.

Throw in a norm-busting incumbent whose made-for-TV presidency has enthralled and appalled in equal measure and this year's triple-bill between Donald Trump and Joe Biden is set to be a doozy. 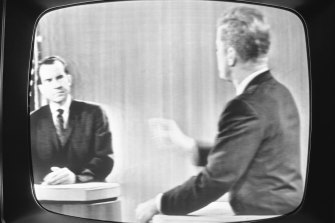 US Vice-President Richard Nixon (left) faces Senator John F. Kennedy in one of four presidential debates in 1960. The election saw the first televised debates in US history.Credit:AP

Televised debates have been part of US presidential elections since 1960, when John F Kennedy first sparred with Richard Nixon at the CBS studios in Chicago. Indicative of the relative novelty of television, Nixon refused to wear make-up, sporting his now infamous "five-o'clock shadow", making him seem shifty and ill-at-ease compared with his handsome, more youthful opponent.

Kennedy went on to win the election narrowly, prompting some commentators to declare that debate the point at which style and appearances began to eclipse substance and policy in US politics.

Twenty years later it was Jimmy Carter and Ronald Reagan who faced the cameras together. The former Hollywood star came out on top, at ease in the studio and addressing viewers directly with a devastating critique of the economy under Carter. The polls surged and Reagan won a decisive victory. 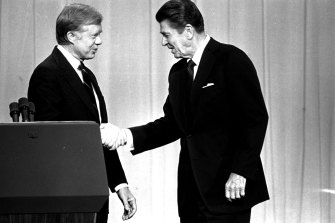 There have been plenty of memorable moments since – which often have little to do with substantive policy debates. In 1992 President George H. W. Bush was widely pilloried for seeming out of touch when he glanced at his watch while debating Bill Clinton and Ross Perot. Then in 2012 Mitt Romney inflicted serious political damage on himself with his "binders full of women" comment in his debate with Barack Obama.

The Trump/Hillary Clinton debates of four years ago raised the tension and drama to levels unthinkable in earlier, more decorous times. Trump threatened to jail Clinton, declared her a "nasty woman" and at one point appeared to physically intimidate his opponent. It was widely agreed Clinton won all three debates, but that didn't prevent her shock election loss to Trump. 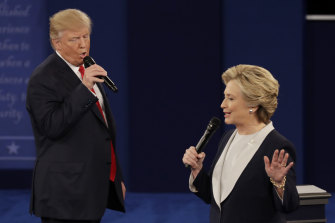 Donald Trump and Hillary Clinton at their second presidential debate in 2016.Credit:AP

The first debate between Trump and challenger Biden is slated for Wednesday morning (AEST) in Cleveland, Ohio. Overseen by the non-partisan Commission on Presidential Debates, as all debates since 1987 have been, this first of three clashes will be moderated by Fox News anchor Chris Wallace. Wallace was widely praised for his performance chairing the third Trump/Clinton debate in 2016 – which may be the reason his name was notably absent from the list of 24 preferred moderators submitted to the commission in August by Trump lawyer Rudy Giuliani. 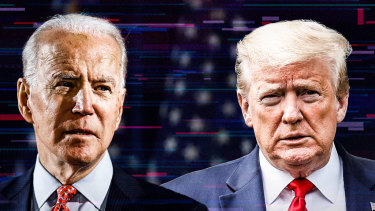 Joe Biden and Donald Trump will square off in three televised debates.Credit:Stephen Kiprillis

The 90-minute debate will be broken down into six,15-minute topics. The wide-ranging list, released this week is: the Trump and Biden records; the Supreme Court; COVID-19; the economy; race and violence; and the integrity of the election.

The first Trump-Clinton debate drew a record 84 million viewers and while it's impossible to predict how many will watch the 2020 version, many commentators expect ratings to be similarly massive, given the intense interest in the election and the fact so many people are staying home due to the pandemic.

Biden, who can be prone to gaffes and stumbles, is reportedly preparing in a conventional fashion, rehearsing scenarios and talking points, while Trump, who famously has little time for reading briefing notes, claims not to be doing any formal preparation.

Critics of the President have pointed to his widely panned performance earlier this month on an ABC News "town hall", as evidence he will struggle in the debates.

There is also an expectation, based on past behaviour, that Trump will unleash his usual barrage of untruths. A key element will be whether Biden chooses to combat the President's habitual mendacity or takes the advice of many that he should lay out his own agenda rather than trying to engage too closely. How Wallace holds Trump to account will also be keenly watched. 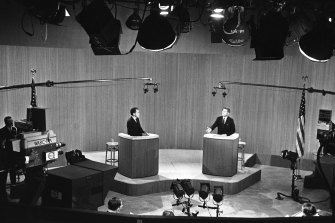 But despite all the attention, there's still plenty of reason to question the effect they will have on the election outcome.

In the past three elections the percentage of voters who say they find the debates very or somewhat helpful in deciding who to vote for has remained steady in around the mid 60s.

But that reckons without the extraordinary polarisation of the US electorate in which few if any events seem capable of moving the needle significantly between the two candidates.

The theatre of the debates will be irresistible but their effects might only be marginal in an election being played out against the backdrop of a pandemic and a first-term presidency so wildly at odds with anything seen before in US politics.