Former prime minister Theresa May led a Tory revolt against Boris Johnson’s plans to make swingeing changes to planning laws today in her latest attack from the backbenches.

The Maidenhead MP criticised proposals by her successor which could see big increases in building in rural areas like her part of the Home Counties.

The Conservative former prime minister attacked the Government’s house-building and planning reforms for England as being ‘ill-conceived’ and warned it ‘flies in the face’ of their levelling-up agenda.

She also mad a veiled swipe at its use of an algorithm to work out where to build, after the use of such a computer programme to work out GCSE and A-Level exam results in the summer end ed in farce.

England’s traditionally Conservative heartlands will have to find space for 1.5 million new homes under Government plans.

The plans being considered by ministers could require tens of thousands of extra homes to be built over the next 15 years in rural counties like Kent, Surrey, Berkshire and Devon.

The proposals, which are said to be the brainchild of Boris Johnson’s top aide Dominic Cummings, have sparked widespread fury among Tory MPs amid fears of the south of England being ‘concreted’ over.

Addressing the Commons today Mrs May agreed that more homes need to be built but called on the Government to ‘think again’ as its proposed algorithm setting out priority areas does not guarantee this happening.

She continued: ‘What this algorithm does is build up planning permissions, it doesn’t build houses.’ 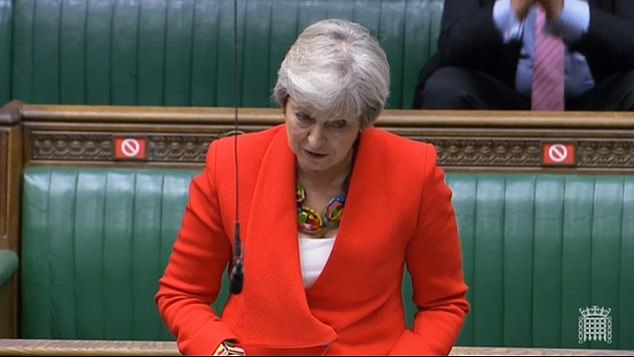 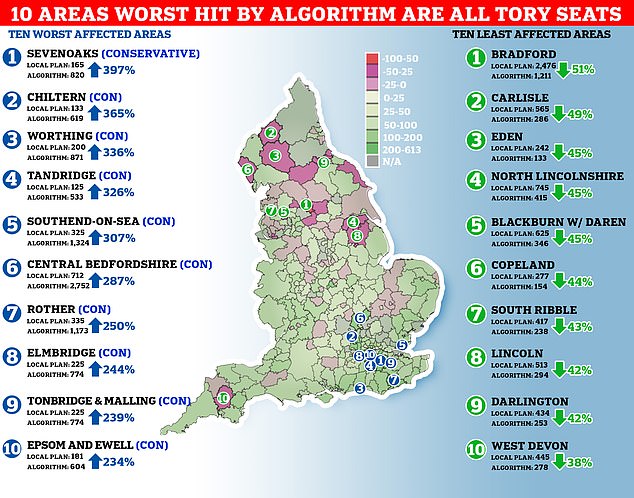 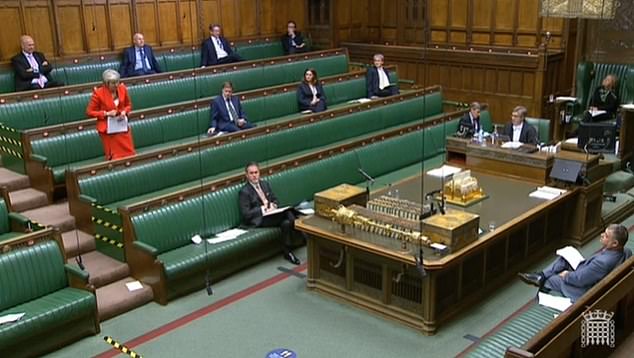 ‘But the problem with these proposals, the problem with this algorithm on housing numbers, is that it doesn’t guarantee a single extra home being built and, far from levelling up, it forces more investment into London and the South.

‘This is a mechanistic approach and it is ill-conceived.’

It was her latest attack on Mr Johnson’s policies, having previously criticised the Internal Market Bill for containing legislation that would break international law.

She was joined in her criticism today by two of her former ministers, ex-foreign secretary and former leadership challenger Jeremy Hunt, and Chris Grayling. Both represent areas of Surrey.

The initiative could see an additional five million homes built across England over the next 15 years, with nearly a third in rural counties.

According to analysis by the House of Commons library, that target would be two million more than what has already been agreed upon by local councils.

While many urban areas and parts of the north of England would see their housebuilding requirements remain largely unchanged or even reduced, counties in the south of England could be hit hard.

Some 13 of the 20 areas forecasted to see the largest increase are represented by Tory MPs.

The algorithm approach is being considered by the Government as it tries to deliver on its annual target of building 300,000 new homes.

It calculates new home requirements based on either the most up-to-date local annual household growth projection for the next decade or 0.5 per cent of the existing housing stock in the area. Whichever figure is higher would be adopted.

Local affordability of homes is then factored in as part of a drive to build more properties in areas where houses are less affordable.

Mr Hunt expressed ‘grave reservations’ over the Government’s plans, and warned of risks to the English countryside.

He told the Commons: ‘We lose that at our peril. In short, I am concerned that these proposals do not recognise serious risks.

‘The argument for building new houses has been won but what is on the table risks eroding local democracy, reducing affordable housing and encroaching on our beautiful countryside.

‘The Government must think again.’

The Government has said the plans are still part of a consultation.

Tory MP Bob Seely (Isle of Wight), who moved a backbench motion requesting the new housing algorithm is not introduced until a debate and ‘meaningful’ vote have taken place in the Commons, accused the Government of ‘concreting out’ rather than levelling up if they push ahead with the reforms.

He told MPs: ‘In our manifesto we promised to level up and connect the country so that everyone could get a fair share of future prosperity, and if levelling up means anything it surely implies an integrated plan for infrastructure, for jobs, for housing, to revive overlooked northern and Midland towns and stop the endless drift of jobs and opportunities to the south, the shires and suburbs.

‘I support levelling up 100 per cent but, broadly speaking, the danger in these new targets in the way they’ve been shaped is that the biggest housing increases will be to rural shires and suburbs, and the biggest falls are in the urban north and Midlands.

‘The worst of all worlds would be to hollow out our cities, to urbanise our suburbs and suburbanise the countryside and yet I fear that is what we may accidentally be achieving. That is not levelling up but is concreting out.’