They found its legs. Now the search for the rest of the thunderbird … is go!

Scientists have found the drumsticks of an ancient Australian bird weighing in at more than 600 kilograms, and now they’re planning to go back and finish the meal.

Dromornis stirtoni, also known as Stirton’s thunderbird, was a massive flightless bird, standing more than three metres tall, which stalked the plains and waterholes of inland Australia about 8 million years ago. 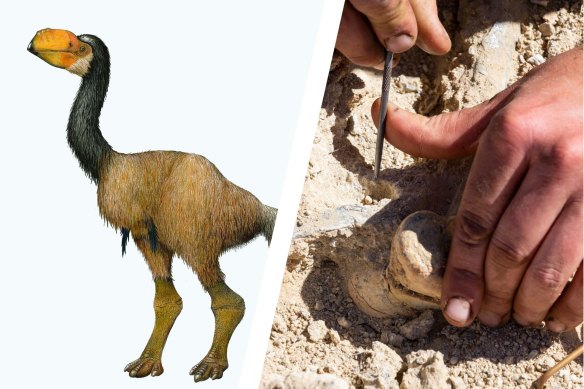 A reconstruction of Dromornis stirtoni (left) and its fossilised bones slowly being unearthed from the bone bed at Alcoota.Credit:Adam Yates

Its estimated size and weight make it one of the largest birds to have ever walked the Earth. In its upper limits, it would have been heavier than New Zealand’s Giant Moa, and taller than the Elephant Bird of Madagascar.

Other large ancient birds from the same family have been found in other parts of Australia but Dromornis stirtoni has only ever been found in one spot – the Alcoota fossil reserve, 250 kilometres north-east of Alice Springs.

Museum and Art Gallery of the Northern Territory researcher Adam Yates, who has been going to the site for many years, said the fossil deposit was very unusual.

“It’s an extremely dense bone bed occupying a fairly thin layer in the strata, only about 50 centimetres deep, so there’s lots and lots of bones which must have been put there over a short period of time,” he said.

“We estimate that there’s probably the bones of around 3000 individual animals, all jumbled up and stacked on top of each other, and that bone bed covers a pretty broad area.

Such density would seem to be a blessing for fossil hunters, but it is a double-edged sword —because the bones are all jumbled up, scientists have to keep chipping away at the layer, finding individual bones and then figuring out later how they might fit together.

All existing reconstructions of Dromornis stirtoni have been assembled this way, by taking a bone here, a bone there, often found years apart in different corners of the bone bed, and piecing them together later in the museum.

That all changed during this year’s dig, when Yates and his colleagues started chipping away a previously little-explored corner of the site. 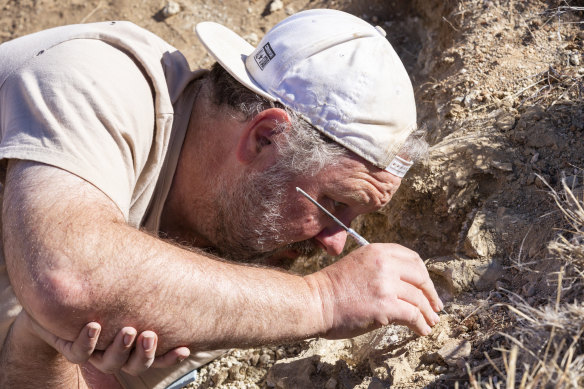 “Suddenly we started to find partial skeletons in full articulation, something we’ve never found at Alcoota before,” he said.

“We found these two legs sitting with all the bones in the right place and realised we were looking at Dromornis.”

Having fossilised thunderbird legs with all the bones where they would have been in life means the researchers can now go back to their reconstructions and double check to make sure they got things right, which Yates said they were relieved to find they had.

But even more important is what is still waiting in the bone bed, ready for the second course.

“It’s a painstaking process to remove these fossils, you get literally centimetres a day, so we got the legs out and then had to stop,” he said.

“But because the legs were together in articulation we believe at least the hips are still there and possibly the rest of the skeleton.” 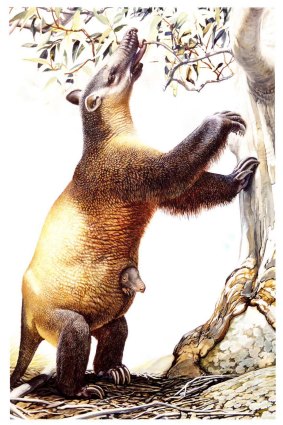 An artist’s reconstruction of the Palorchestes.Credit:Peter Schouten

If they do find the rest of the giant bird they hope to gain more insights, including exactly how tall it was and how many bones were in its neck.

The fossil beds also yielded up other discoveries this season, including a partial articulated skeleton of an ancient kangaroo called Dorcopsoides, and Yates said he had a menu of potential discoveries beyond the rest of the thunderbird.

“It’s not related to any living marsupial but there’s debate about whether it had a trunk like a tapir, and finding an articulated skeleton would be very special.

“So even though we’ve already found so much, there’s still so much to find, so we’ll be back there next year.”