Three-tonne haul of heroin from Afghanistan worth £2BILLION seized

Nearly three tonnes of heroin with a street value of £2 billion from Afghanistan have been seized from a western Indian port in a major bust, officials said .

Two Indians were arrested after the heroin, which was kept in two containers marked as carrying talc, was found by the Directorate of Revenue Intelligence (DRI) at Mundra Port in the western state of Gujarat, the anti-smuggling government agency said.

The consignment – with one container carrying nearly 2,000 kilograms of heroin and another holding nearly 1,000 kilograms – originated from Afghanistan and was shipped from a port in Iran to Gujarat, the DRI said. 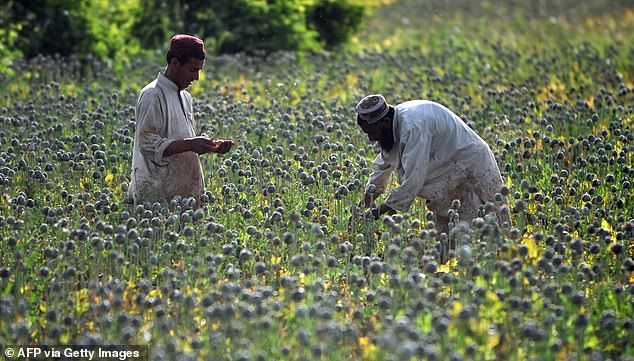 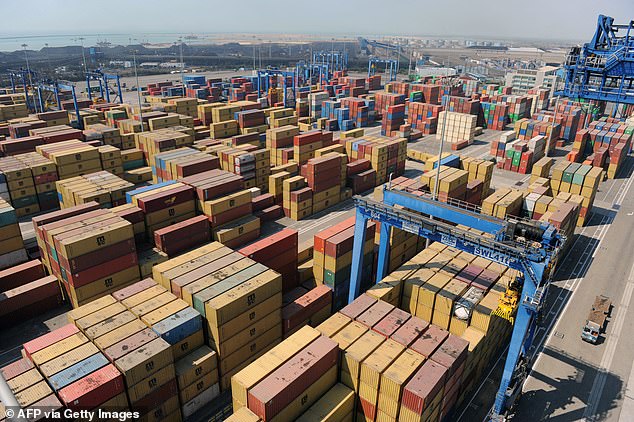 Nearly three tonnes of heroin with a street value of £2 billion from Afghanistan have been seized from Mundra Port, India (file image of stacked containers at Mundra Port)

‘Searches have been conducted in Ahmedabad, Delhi, Chennai, Gandhidham and Mandvi in Gujarat,’ the agency said in a statement.

It added that the shipment was estimated to be worth 200 billion rupees (£2 billion) and was seized on September 15 after the agency received intelligence they contained narcotics.

The investigation also allegedly uncovered the involvement of Afghan nationals, the DRI said, although no one else has been arrested so far.

‘Investigation conducted so far has also revealed the involvement of Afghan nationals, who are under investigation,’ an official in Gujarat said, declining to be named as he was not authorised to speak publicly. 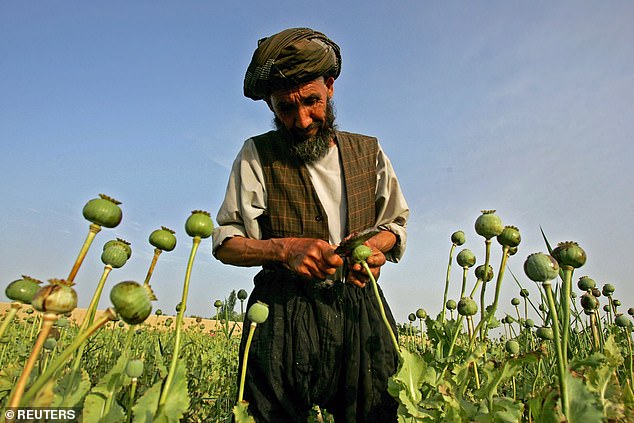 An Afghan farmer collects raw opium from poppies, in a village outside Balkh province, north of Kabul, in 2006

The narcotics were headed to Delhi and the two arrested people had sought an import-export licence based on a house address in Vijayawada, police in Vijayawada said in a statement on Monday.

The containers had been declared as containing semi-processed talc stones from Afghanistan and had been shipped from Bandar Abbas Port in Iran to Gujarat Mundra port, the Gujarat official said, adding that forensic tests confirmed the presence of heroin.

Afghanistan is the world’s biggest producer of heroin, supplying between 80-90 percent of global output.

Heroin production has boomed in Afghanistan in recent years, helping fund the Taliban which returned to power in August.

But the Islamist militants have said they plan to ban the drug trade, without giving details on how.