A TikToker has claimed that interracial relationships, particularly between white men and Asian women, are a by-product of American imperialism and the United States’ roles in wars.

The American TikToker, who goes by username @youngqim and is known as Young Kim on Instagram, argued women were not easily granted access to the US under strict immigration rules as the US didn’t want ‘Asian people to start families here’.

Young, who says he is a history student, said this changed in the 20th century when women were exempt from restrictions if they were married to an American soldier, which he said led to interracial relationships and Asian women being ‘fetishized’.

He went on to claim that the Korean War and the Vietnam War then prolonged global conflicts, leading to more interracial relationships, when American soldiers married Asian women after serving on the frontlines and brought them back to the US.

His video started with a short clip from TikToker @virtualflop, also known as Elise, who mouthed to along to a voiceover about interracial relationships, which poster Elise said she had used as a ‘joke’.

The voiceover said: ‘Interracial relationships are not natural. ‘Y’all are gonna [sic] hate me for this one, but I don’t give a f**k. It’s the truth.’ 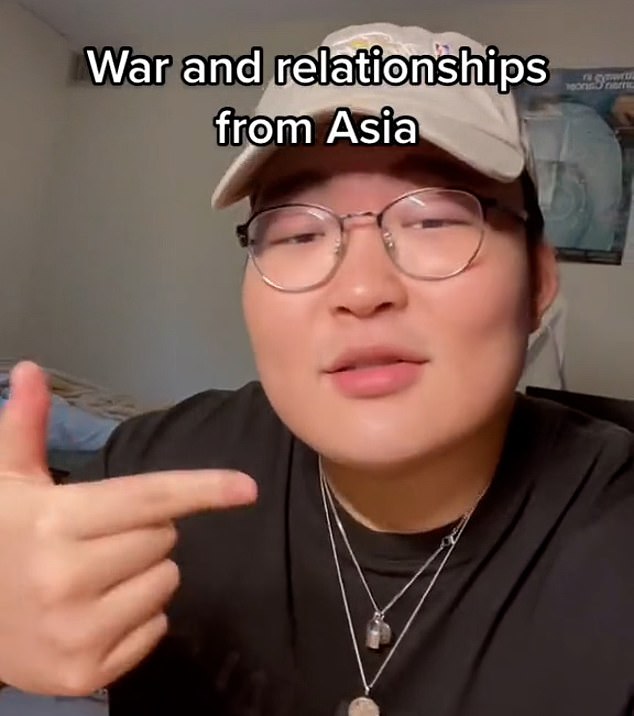 A TikToker, who is known as Young Kim (pictured), has argued that white men having a ‘fetish’ for Asian women is a result of American ‘imperialism’

Alongside the comments, reads the caption: ‘Writing my paper about how romantic relationships between yt [sic] males and Asian females wouldn’t be as common in society if it weren’t for US involvement in wars.’

Responding to the TikTok, Young says that he is going to ‘elaborate’ on Elise’s claims by talking about federal laws that restricted immigration from Asian countries, which he claimed saw hardly any Asian women moving to the United States.

He claims: ‘Throughout most of American history, immigration from Asia had been limited to exclusively men.

‘The biggest reason for that was they didn’t want Asian people to start families here. We were considered an “undesirable element”.’

In the 1850s, young single men were recruited as laborers and the Chinese made up 20 per cent of California’s labour force by 1870, but were only 0.002 per cent of the entire US population, according to Asia Society.

Young goes on to talk about the Chinese Exclusion Act of 1882, which was a federal law signed by President Chester Arthur barring the immigration of Chinese laborers to the United States.

Under the Immigration Act of 1924, only a limited number of immigrants were allowed into the US through an ‘origins’ quota, which gave visas to two per cent of the total number of each nationality as of the 1890 national census.

But he explained that this began to change when Asian women were allowed to immigrate to the US in large numbers under the War Brides Act of 1945, which exempt ‘war brides’ from the restrictions laid out by the 1924 act. 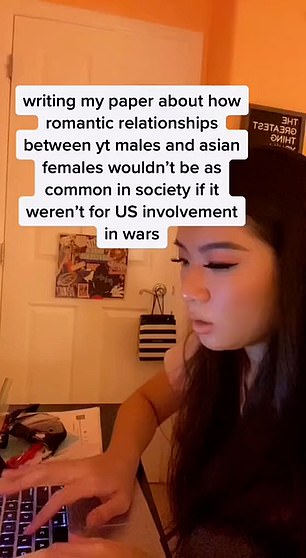 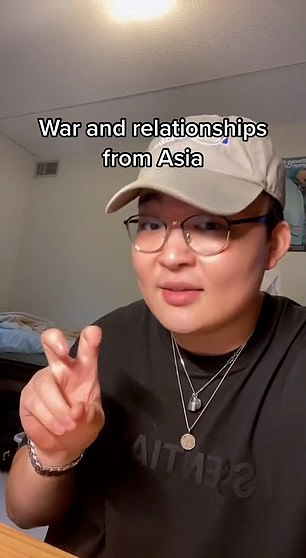 Young, who claims to be a history student, comments came in response to a clip from TikTok user @virtualflop, who mouths along to audio saying ‘interracial relationships are not natural’

Following the brides act, which allowed wives and children to enter the US ‘if admissible’ as non-quota immigrants after World War Two, around 30,000 foreign war brides moved to the US.

After World War Two, many allied servicemen married women in countries where they were stationed during the war, which occurred in the likes of France, Vietnam, Korea, the Philippines, Japan and China.

Young argued that America’s ‘imperialist’ position in the First and Second World Wars, led white men bringing Asian women back from the frontlines to the US as their wives, rather than them previously being seen as ‘undesirable’.

He added: ‘Yup! I said war brides, which meant they could only come here if they were married to a white American soldier.

‘The Japanese internment camps – one of the only ways you could leave is if you were a woman and you married a white man.’

Young claimed that both the Korean War, from 1950 until 1953, and the Vietnam War, from 1955 to 1975, ‘prolonged conflicts’, which led to more American soldiers marrying ‘impoverished’ Asian women who were looking for a way to ‘survive’.

America sent around 550,000 troops to the front lines during the Vietnam War and some 1,780,000 US soldiers serving during the Korean War.

Immediately after the Korean War, some 6,423 Korean women wed US military personnel as war brides, while 8,040 Vietnamese women came to the US between 1964 and 1975.

Young argued that Asian women moving over to the US as brides, and white men then dating Asian women following this movement, is a ‘by-product’ of America’s ‘imperialist’ role in these wars and the immigration rules that came before.

He added: ‘White men having Asian fetishes is a by-product of American imperialism.’