Time for a US leader who serves the people, not himself

Few US presidents have ever captured such global attention as its incumbent, Donald J. Trump. While Americans prepare to vote in Tuesday's election, and have done so already in unprecedented numbers, the world is watching, and holding its breath.

For someone who had never run for office, and appears barely educated in the principles of political philosophy, Mr Trump has dominated his party, and the broader political discourse with a potent blend of populism, bullying and fervent backing from his base. 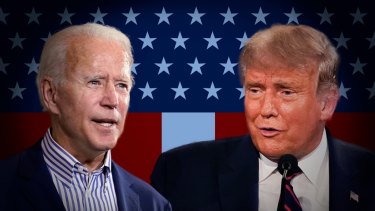 Donald Trump and Joe Biden are facing off in this year’s election. Credit:Stephen Kiprillis

In many respects, how he behaved and what he promised during the 2016 campaign is what Mr Trump has delivered during the past four years. He lowered taxes, bolstered the military's budget, cut regulations, clamped down on immigration, pulled out of the Paris climate accord and the Iran nuclear deal, aggressively confronted China over trade and, with help of the US Senate, filled the federal and Supreme courts with conservative judges.

Any belief that he would take on a more "presidential" demeanour once he entered the Oval Office, was soon dispelled. His penchant for bigotry and deceit, his Twitter tirades pillorying his enemies and, shockingly, members of his own government, and his willingness to openly court dangerous fringe groups, such as QAnon and white nationalists, has gone on unabated.

On the international stage, Australia may have largely avoided his vitriol, but he felt no such reservations when disparaging many of America's long-standing allies, while finding time to cosy up to authoritarian strongmen such as North Korean leader Kim Jong-un and Russia's Vladimir Putin.

Mr Trump's most glaring failure, though, has been closer to home. While the pandemic has tested all government leaders across the world, Mr Trump's reluctance to follow expert advice, his dearth of empathy, and his failure to unite the American people against the virus has made him particularly ineffectual. The nation has paid a devastating price, with more than 225,000 deaths recorded.

At 70, Mr Trump was the oldest person to assume the presidency. His opponent, Joe Biden, would surpass that by seven years if he were to win office. Thirty-six years a US senator, and eight as former president Barack Obama's deputy, Mr Biden has an extensive policy resume that he now accepts has some blemishes.

Particularly on issues of racial injustice, a major flashpoint in America today, Mr Biden has had to apologise for supporting a series of tough-on-crime laws introduced in the 1980s and '90s that contributed to a rapid increase in African Americans being incarcerated. But he also has vast experience on the world stage, having had a front-row seat to many international crises, and was supportive of such progressive issues as gay marriage during the Obama years.

Seeking the presidency for a third time, Mr Biden won the primaries on a minimal centrist platform, not wanting to alienate moderate Democratic supporters and bargaining on a strong anti-Trump vote. But since winning the nomination, he has released detailed plans strongly supporting action on climate change, extending healthcare coverage, improving race relations, tackling the pandemic in a more co-ordinated scientific-based way and toning down the rancorous debate in Washington.

After four years of Mr Trump, this would be a welcome change. While America's future is in the hands of its voters, much of the world, including Australia, would surely welcome a US president who puts the interests of its people first, rather than one who has repeatedly been willing to use his office as a platform for his own self-interest.

The Age’s editor, Gay Alcorn, writes an exclusive newsletter for subscribers on the week’s most important stories and issues. Sign up here to receive it every Friday.