Lansing: One of Michigan’s highest-ranking Republicans on Wednesday, local time, stood by his false claims that it is a “hoax” to blame supporters of then-President Donald Trump for the deadly riot at the US Capitol.

Michigan Senate Majority Leader Mike Shirkey, in a private conversation with Democratic Lieutenant Governor Garlin Gilchrist II on the Senate rostrum that was captured by the chamber’s video feed, said: “I frankly don’t take back any of the points I was trying to make” but rather “some of the words I chose.”

He said the siege was “very real, but the assignment of cause — that was planned weeks and months in advance.” 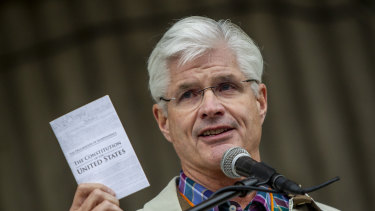 Shirkey apologised on Tuesday after the release of an hourlong video in which he told Republicans last week that the January 6 protest “wasn’t Trump people. That’s been a hoax from day one. That was all prearranged.”

The statement did not specify the remarks for which he was apologising, however. He did not speak to reporters following session on Wednesday.

The controversy was the latest involving Shirkey and the GOP more broadly in a battleground state won by Joe Biden but where Trump has a continuing grip. 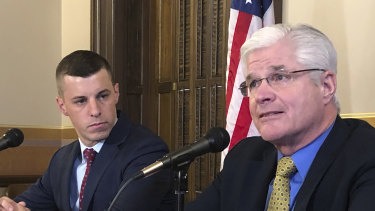 Shirkey has come under fire for meeting with paramilitary group leaders last year and attending a rally with extremists, weeks after armed men entered the Statehouse to protest Democratic Governor Gretchen Whitmer’s coronavirus restrictions. Some were later charged in a plot to kidnap the governor.

The newly elected co-chair of the Michigan Republican Party, Meshawn Maddock — a “stop the steal” figure — tried to intervene when Democratic electors cast votes for Biden in Lansing, and she organised buses to Washington, DC.

In Shirkey’s contentious meeting on February 3, Hillsdale County GOP leaders spoke with him at a restaurant a day before they censured him for a number of reasons, including backing a ban on the open carry of guns in the Statehouse and allegedly not doing enough to fight Whitmer’s COVID-19 orders.

Shirkey countered that Republicans had “spanked her hard” and he joked about having contemplated inviting Whitmer to a fistfight on the Capitol lawn.

Earlier on Wednesday, Shirkey told an activist with the liberal group Progress Michigan, who had approached him on a Lansing sidewalk, that he was saying the hoax was “the fact that it was blamed on Trump. The actual event was very real and very, very unfortunate.”

Gilchrist said “it is clear that his so-called apology was not heartfelt, nor did it come from a place of humility and understanding. Rather, it was an empty gesture made for political expediency, and one that the people of Michigan can see right through.”

Trump’s second impeachment trial is underway. Democrats say the former president was responsible for inciting his mob of backers who broke into the Capitol and interrupted the presidential electoral count. Five people died, including a police officer.

Shirkey is no stranger to controversy.

In 2019, he used the word “bat” and an expletive to call the governor “crazy.” After her recent State of the State speech, he said she looked “delightful” without a mask on. Shirkey, who got COVID-19 in late December, referred to it as the “Chinese flu,” which Democrats said was racist.