London: Britain has imposed tougher restrictions on people and businesses in parts of north-eastern England as the nation attempts to stem the spread of COVID-19 before the colder winter months.

Health Secretary Matt Hancock told the House of Commons that the new measures would include a ban on residents socialising with people outside their own households, ordering leisure and entertainment venues to close from 10pm to 5am and restricting bars and restaurants to table service only. 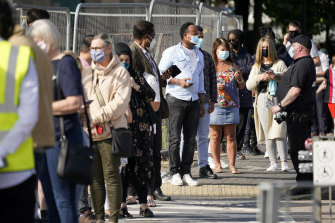 "The battle against coronavirus is not over, and while we strain every sinew to spring free from its clutches, with winter on the horizon we must prepare, bolster our defences and come together once again against this common foe," Hancock said.

The comments came after British Prime Minister Boris Johnson warned that authorities will have to impose tougher measures to combat the spread of COVID-19 and "protect" the Christmas holidays. In a piece published in The Sun newspaper, he said that the only way to be certain the country can enjoy the winter holidays "is to be tough now".

Over the past three days, opposition politicians have criticised Johnson's handling of the COVID-19 crisis and said his government lacked a cohesive plan to tackle a second wave of the pandemic. A shortage of testing capacity is a particular concern, with people around the country complaining they were unable to book appointments for tests or directed to testing centres far from their homes.

Widespread testing is seen as crucial to controlling the spread of the virus because it allows those who are infected to self-isolate while helping health officials to identify hotspots and to trace people who were potentially exposed.

Daily infection rates recently rose to levels not seen since late May, forcing the British government to impose limits on public gatherings.

Figures released late on Wednesday showed 3991 new confirmed cases during the previous 24 hours, up from 3105 a day earlier.

France registered 10,593 new confirmed coronavirus cases over the past 24 hours, setting a new daily record and pushing the cumulative number to 415,481, the health ministry reported on Thursday.

The previous high was 10,561 new cases in a day, recorded on September 12. The sharp increase is a result of a higher infection rate but also of a massive increase in testing. The government has made COVID-19 testing free, resulting in long queues at testing centres in cities across France.

The number of people who have died from the virus in France increased by 50 to 31,095, the second-highest number in two months following the 80 deaths reported on September 11.

New York City’s ambitious attempt to be among the first big US cities to bring students back into classrooms closed by the coronavirus suffered another setback on Thursday, as the mayor announced he was again delaying the start of in-person instruction for most students due to a shortage of staff and supplies.

Mayor Bill De Blasio announced a new timeline that will keep most elementary school students out of their physical classrooms until September 29. Middle and high school students will learn remotely through to October 1.

"We are doing this to make sure all of the standards we set can be achieved," de Blasio said.

The plan, which has now been delayed twice since it was announced in July, is for the majority of the more than 1 million public school students to be in the classroom one to three days a week and learning remotely the rest of the time. About 42 per cent of families have opted for remote-only instruction. 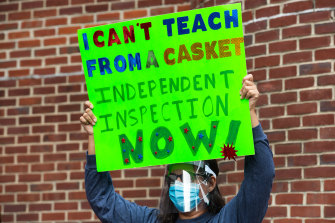 Some teachers have been protesting about the return to in-person teaching without proper safety precautions in New York.Credit:Bloomberg

The delay came just days before students across the nation's largest school district were set to resume in-person instruction on Monday. Now, only pre-kindergarten students and some other special education students will be going back into physical classrooms next week.

"It’s not good enough because they’re still just kicking the can down the road," said Daniel Leviatin, a fourth-grade teacher and school librarian at PS 59 in the Bronx.

New York City schools shut down in March when the coronavirus pandemic hit and students went to all online instruction.

Filming resumes on The Batman movie after coronavirus shutdown

Filming has resumed in Britain on the movie The Batman, Warner Bros said on Thursday, after a two-week shutdown caused by a member of the production – reported to be actor Robert Pattinson – who tested positive for the coronavirus.

"Following a hiatus for COVID-19 quarantine precautions, filming has now resumed on The Batman in the UK," a Warner Bros representative said in a statement.

Pattinson, the star of the superhero movie, was widely reported to be the person who tested positive in early September. The movie studio never confirmed or denied this.

The shutdown underscored the challenges that Hollywood is facing in getting back to work after months of pandemic-induced shutdowns, and the stringent safety measures they must now undertake.

Filming of The Batman had resumed north of London only three days prior to the positive test after being shuttered in mid-March, along with dozens of other movies and TV shows around the world due to the coronavirus.