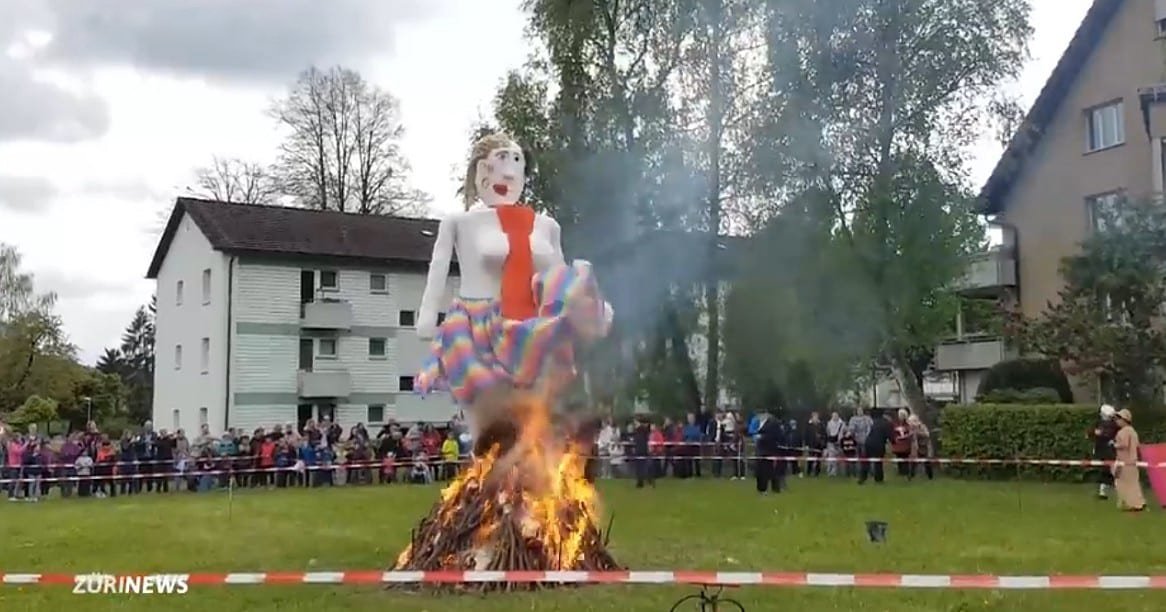 Every year, the small town of Bassersdorf in Switzerland builds a ‘Böögg’ — a large doll that’s set alight for Sechseläuten, an annual celebration marking the beginning of spring.

Typically, the Böögg is created to represent a snowman and is meant to signify the end of winter – though Bassersdorf has a habit of going in a different direction.

Instead of winter, Basserdorf has in the past created its effigies to represent people who they deem negative, including dictators like Kim Jong-Un and Muammar al-Gaddafi.

This year, the town created one with a likeness to a transgender woman, which it called ‘Diversity Böögg’.

The Böögg was dressed in a rainbow skirt, a red tie and makeup and had visible breasts and a penis, according to Swedish newspaper Queer.de.

The effigy sparked a backlash, with one resident filing a criminal complaint against the town.

Master of ceremonies Christian Weiss has insisted this was not an attack on any one person, but rather a statement against ‘rampant narcissistic hypersensitivity and the pathological lack of humor’.

Weiss said that the intention was to focus on a current event but they felt that anything about the pandemic or war in Ukraine would be too sad and Sechseläuten is supposed to be ‘happy and fun’.

Instead, organisers of the ceremony chose gender and diversity – burning a figur of a transgender woman instead.

‘When (wind) blew up the Böögg’s skirt, many spectators grinned,’ Weiss said.

However, not everyone saw the funny side.

An 82-year-old man filed a criminal complaint against the municipal county, calling the ceremony ‘inhuman’ and saying that the ‘distorted image’ affects a particularly stigmatized group of people.

The same man was said to have complained in 2017 that fireworks at the event were too loud, and a year later the Böögg was modelled after him.

The local prosecutor hasn’t pressed charges based on the complaint. However, the resident also reported the ceremony to the Equal Opportunities Office of the Canton of Zurich, its director Helena Trachsel told local media this week.

‘It’s not possible to burn a doll symbolically because of an external characteristic,’ she said.

‘Any degrading gesture that violates a person’s integrity is inadmissible,’ she said, referring to the Equality Act and anti-discrimination regulations. ‘The municipal council has to think for everyone. It has a role model role.’

The town’s mayor, Doris Meier, issued a statement apologising to anyone whose feelings were hurt by the event.

She said that she could understand ‘that the action triggered different opinions on this sensitive topic’ and regretted ‘if people’s feelings were hurt’.

However, she said she didn’t believe that was the intent.

‘I am convinced that those responsible did not want to offend anyone, but wanted to draw attention to the topic of diversity.’