Fox News Flash top headlines for May 8 are here. Check out what’s clicking on Foxnews.com

President Trump has been briefed on the school shooting that unfolded in a Denver suburb, resulting in one death and eight injuries, the White House said Tuesday.

Two suspects were taken into custody following the shooting at STEM School Highlands Ranch. Police identified one of the suspects as 18-year-old Devon Erickson. The other suspect, whose identity was not released, is a juvenile male. The Douglas County Sheriff’s Office said it does not believe there are additional suspects.

“Tragically, this community and those surrounding it know all too well these hateful and horrible acts of violence,” White House spokesman Judd Deere said. 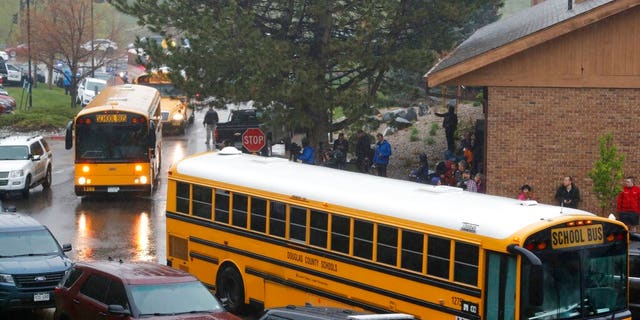 School buses arrive at a recreation center set up for students to get reunited with their parents after a shooting at a suburban Denver middle school. (Associated Press)

STEM School is only about 7 miles from Littleton, site of the infamous Columbine High School shooting in 1999, Denver’s FOX 31 reported.

“The White House has been in communication with state and local officials, and the president has been briefed and continues to monitor the ongoing situation. We offer our full support to local law enforcement and first responders and thank them for their heroism,” Deere added.

President Trump had not publicly commented on the shooting as of late Tuesday.

Other politicians threw in their support. Colorado Gov. Jared Polis tweeted: “The heart of all Colorado is with the victims & their families.”

He added: “While I am deeply grateful that my niece is safe, I’m heartbroken for the parents and students, and am beyond angry that gun violence has yet again struck our community. We must act now to enact real reform to our nation’s gun laws. Not next month. Not next year. NOW.”

FOX 31 reported that STEM School will be closed for the rest of the week. Other public schools will remain open, but under increased security, the station said.