It is customary in America that when a president leaves the White House they transition to elder statesmen by withdrawing from the daily political fray and refraining from criticising the new incumbent. It is considered a point of decency and decorum. This week marked one year since former US president Donald Trump was defeated at the polls and, as with most political norms, he has shown little regard for precedent.

Far from sticking to the greens of his Mar-a-Lago golf course in Florida, where he now resides, Mr Trump has continued his combative role in Republican politics. Even without access to social media – including his megaphone of choice, Twitter – Mr Trump has managed to keep a vice-like grip on his base. 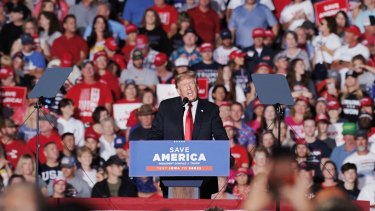 Back on the trail: Donald Trump speaks during a Save America rally in Iowa last month. Credit:Bloomberg

He has done this with his usual amalgam of culture war issues (critical race theory is a favourite) and grievances, most notably his ongoing accusation, despite evidence to the contrary, that he was cheated out of power via a corrupt election. A recent poll confirmed that if you throw enough mud, some of it will stick. Among self-identified 2020 Trump voters, 72 per cent said the last presidential election was probably or definitely not free or fair.

This year, Republicans have used these seeds of doubt to push through more than 30 laws in 19 states to restrict voting, which in many instances largely impact Latino, African-American and Asian citizens.

Mr Trump’s ability to maintain his dominance has been helped by a less-than-stellar showing by the Democrats, including US President Joe Biden, whose performance is under increasing scrutiny. While he began strongly with his efforts to rectify the faltering vaccine rollout, America’s shambolic withdrawal from Afghanistan proved a turning point.

A stumbling economy and a failure to pass an enormous infrastructure, social policy and climate bill has seen his popularity plummet and created the impression that, despite Democrats controlling the White House, Senate and House, they cannot implement their expansive agenda.

This led this week to a raft of election losses for Democrats at a state level in districts that only a year ago showed strong signs of support. It’s an ominous sign for Democrats next year, when all members of the House and about a third of the Senate will face mid-term elections.

Adding to this volatile mix is the heightened speculation over whether Mr Trump will run in the next presidential election. He is travelling the country holding rallies, staying involved in internal GOP politics and raising vast amounts of money. He has the support of a majority of Republican voters and some of his former advisers are adamant that he is going to join the race.

In certain respects, it may be Mr Biden’s best chance of winning a second term. While Mr Trump does have the backing of most die-hard Republicans, he lost the last election as a result of many voters being turned off by his aggressive and toxic approach to politics. That reputation has not been improved by the reporting of his extensive attempts to overturn the last election.

But that is unlikely to discourage Mr Trump from hitting the election trail again. If there is one thing we have learnt about the former president, it is that he is brazen enough to ignore past failings, even when they set out to undermine the very institutions that buttress America’s democratic system. Mr Trump may be one year out of office, but he may well be three years from returning.