Two canyoners are feared drowned in the Blue Mountains after they were sucked into a whirlpool and disappeared underwater on Saturday afternoon.

Emergency services have suspended their search operation because of poor weather conditions after arriving at the Wollangambe Canyon in Mount Wilson at 2.30pm. 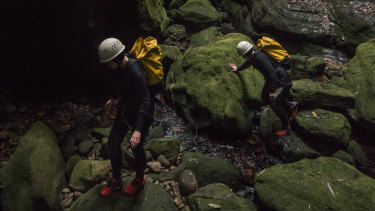 Canyoning has grown in popularity, but can be dangerous following rain. Credit:Wolter Peeters

In a statement, police said the two women, aged 24 and 39, were with a larger group that was canyoning in the area when they were sucked into the water. The women have not been seen since since.

The other members of the group were not injured and were assisted by police, paramedics and other emergency services personnel at the scene.

The search, suspended at about 6pm, is expected to recommence at dawn on Sunday with the help of police divers.

The incident followed rainfall in the area. Previous canyoning tragedies caused by sudden rising waters have have prompted warnings about the dangers of the activity.

Canyoning involves people dropping into a water course at the bottom of a narrow gorge and travelling with the flow to an exit point.

Signs at popular canyoning spots in NSW warn people to avoid the activity if rain is forecast or if the weather appears changeable. Even experienced canyoners are at extreme risk in the event of flash flooding.

In the 24 hours to 9am on Saturday, 10mm of rain fell in the Mount Wilson area. The rain continued throughout the day.

Our Morning Edition newsletter is a curated guide to the most important and interesting stories, analysis and insights. Sign up to The Sydney Morning Herald’s newsletter here.