BRITS are set to enjoy warm temperatures of 24C today, as the Met Office warns sunseekers to cover up due to a big increase in UV levels.

And weather forecasters predict high temperatures will continue throughout the week up until Friday – when thermometers will take a dip once again. 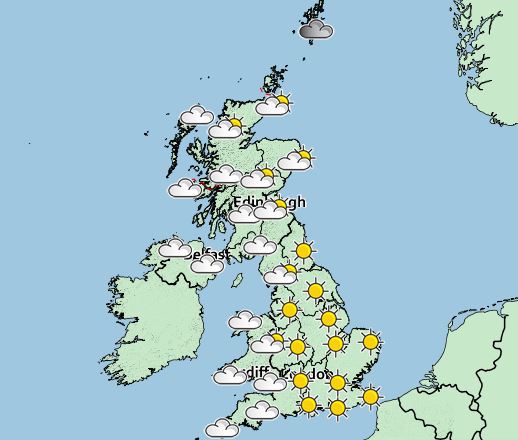 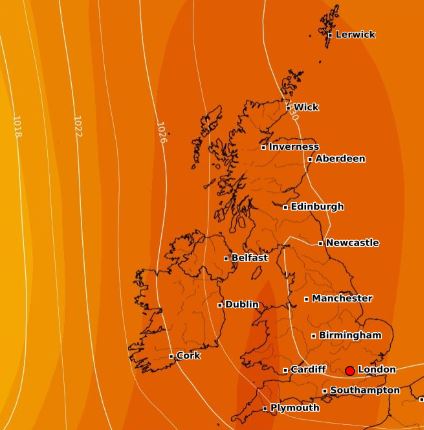 Met Office maps for the week ahead show temperatures reaching the low- to mid-20s – with the area between Glasgow and Edinburgh seeing highs of 23C.

The east of England will be a little cooler with highs of only 14C-16C – but skies should be clear and bright.

Londoners will be feeling the heat too though as they see the mercury creeping into the 20s.

But northern areas and parts of Scotland will see the best in terms of the heat – with highs of 24C. 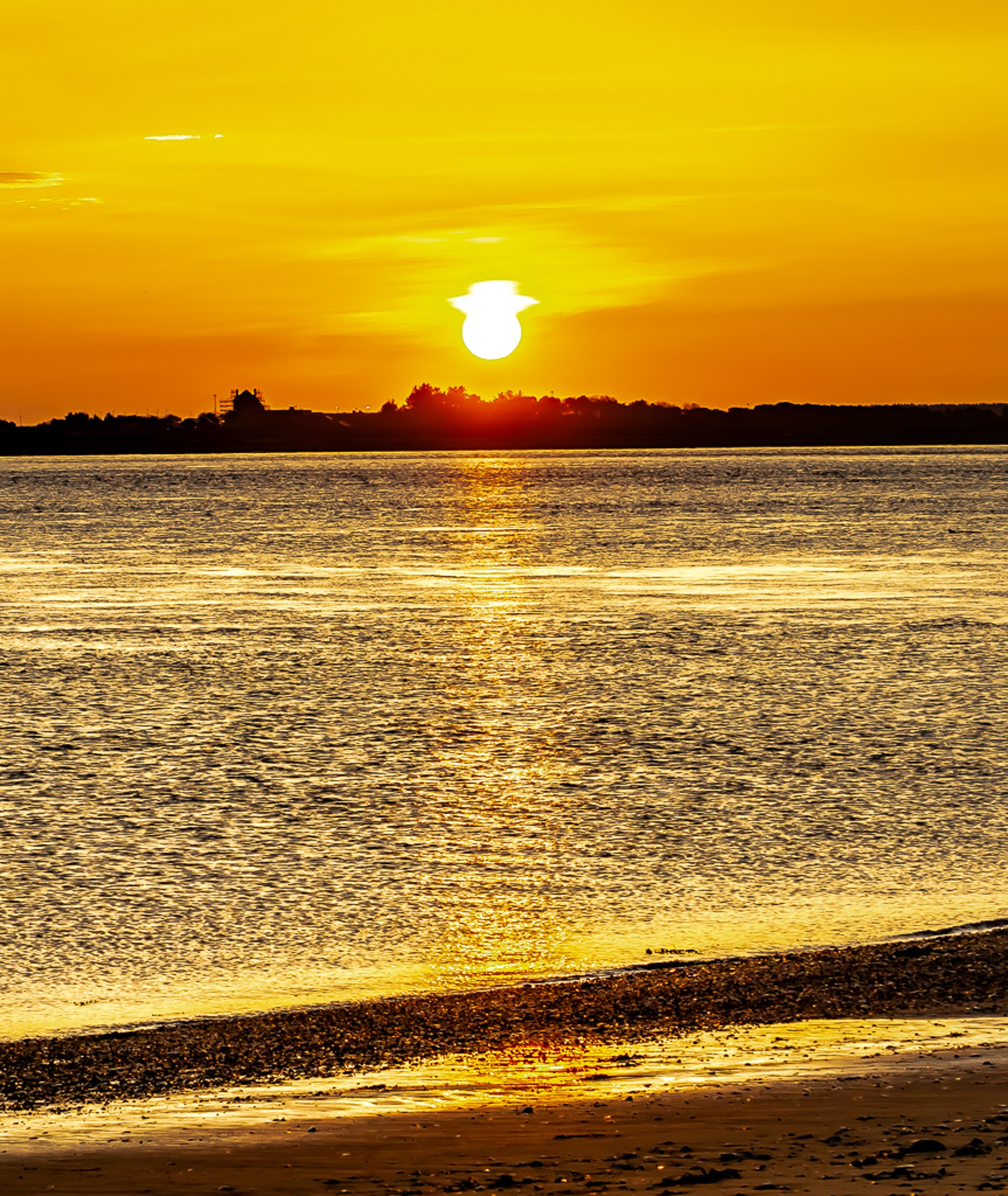 SWITCHCRAFT is a free service that finds you the right energy deal – and you could save an average of £219 a year.

A fiver will be paid into your bank account within four months of completing the switch. prepayment meter customer customers will receive a £5 Amazon voucher. Open to those 18 and over. UK residents only. Click here for full T&Cs.

The Met Office has also said UV levels are high across the UK this week.

They recommend sunseekers stay in the shade during midday hours as well as covering up and slapping on sunscreen.

Meteorologist Craig Snell told The Sun Online: "We're going to be expecting very dry weather with plenty of sun within the next three days. 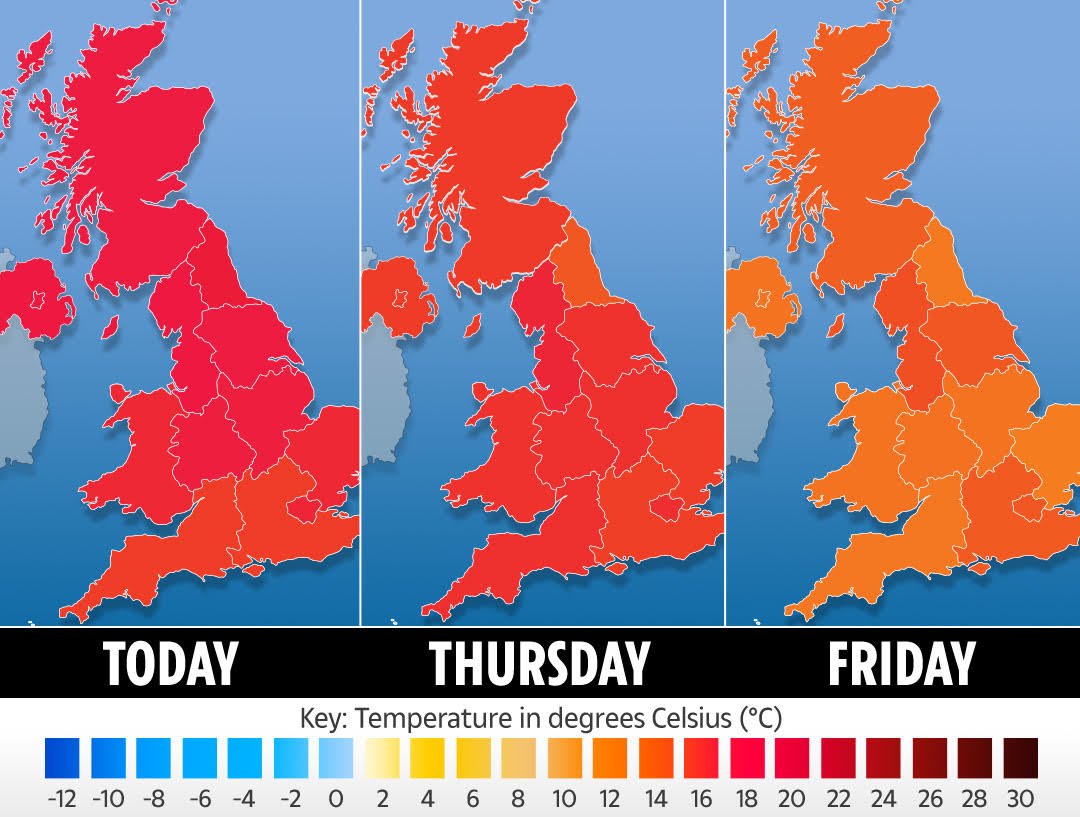 "The temperature will peak on Wednesday, reaching 24C in parts of Scotland and northern England.

"We're going to see some rain creep in the the second half of the week, as temperatures will begin to settle down on Friday."

'MAKE THE MOST OF IT'

The Met Office’s Sophie Yeomans urged people to “make the most” of the sunshine – as temperatures will dip back down later this week.

She said: “We are expecting another couple of days of sunny weather and light winds, which will push temperatures up through the week."

Met Office meteorologist, Alex Burkill, told The Sun Online: "We're going to be expecting a largely fine week ahead of us.

"Temperatures are going to be increasing and we're going to see a high of 24C in some parts of the country.

"The heat will be coming from the south east, meaning that some parts of the country might be experiencing slightly frostier temperatures." 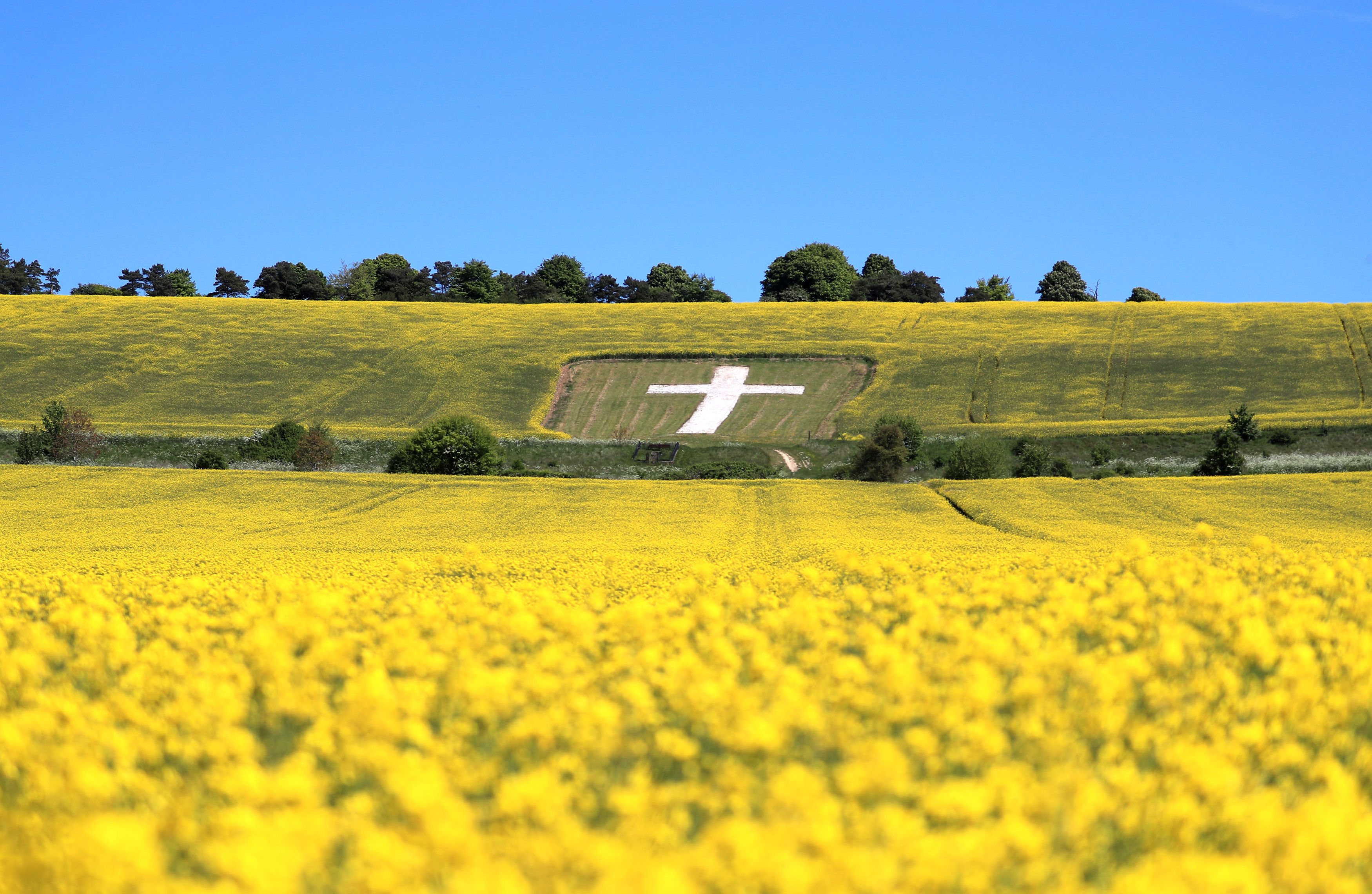 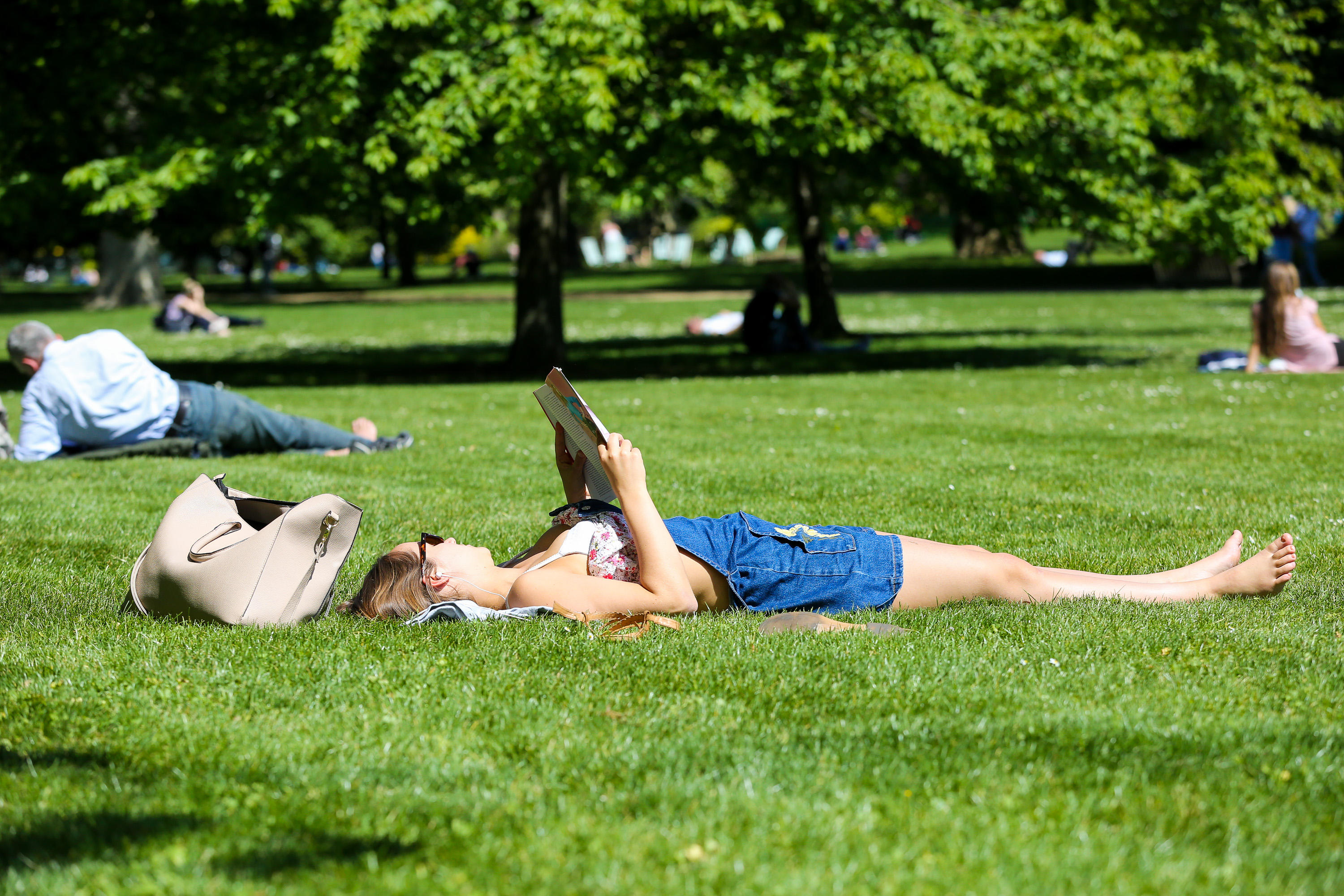 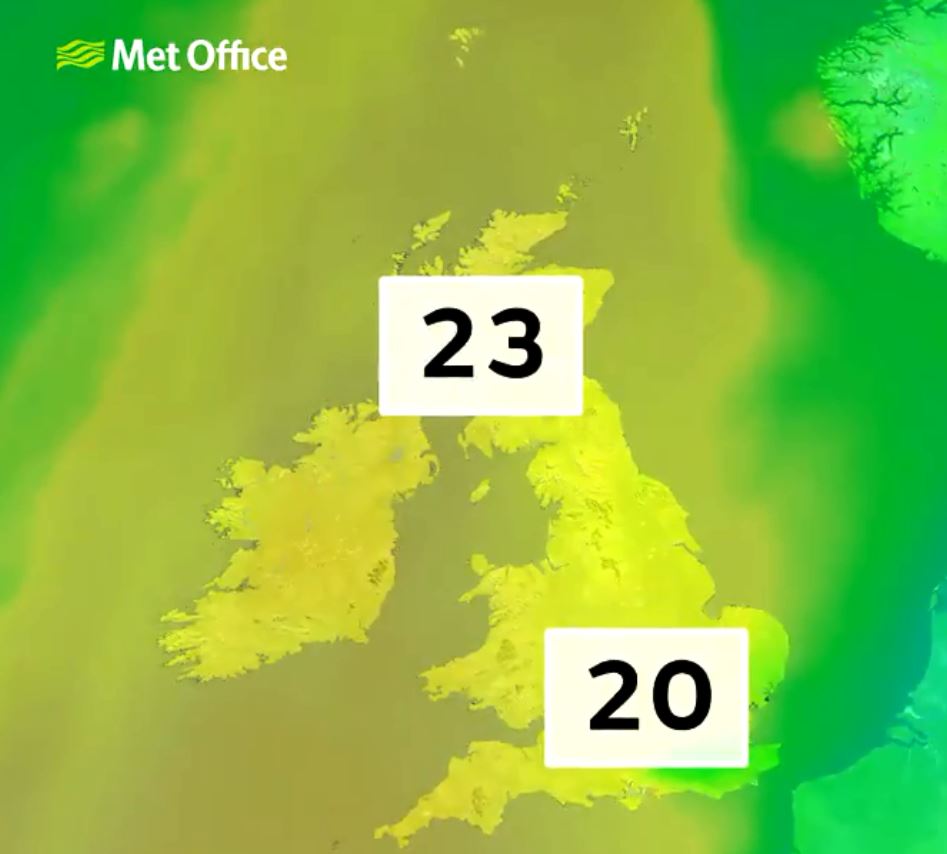