Ukrainian film star Pasha Lee, 33, gave his bulletproof vest to a child in a heroic gesture right before his death, Ukrainian media has said.

The actor had been helping children flee a house during an evacuation in the town of Irpin when he was killed by Russian shelling, it was reported.

Lee, known for his acting, presenting, and voice dubbing work, was killed near Kiev, Ukraine as the area surrounding the city was occupied on March 6. 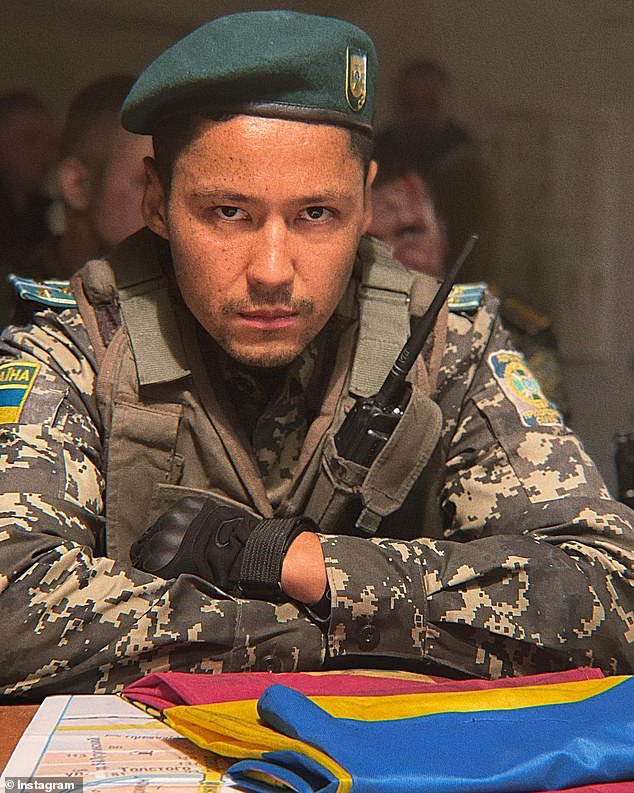 Pasha Lee (pictured), 33, known for his acting, presenting, and voice dubbing work, was killed in Irpin, Ukraine as the city was occupied by Russian troops 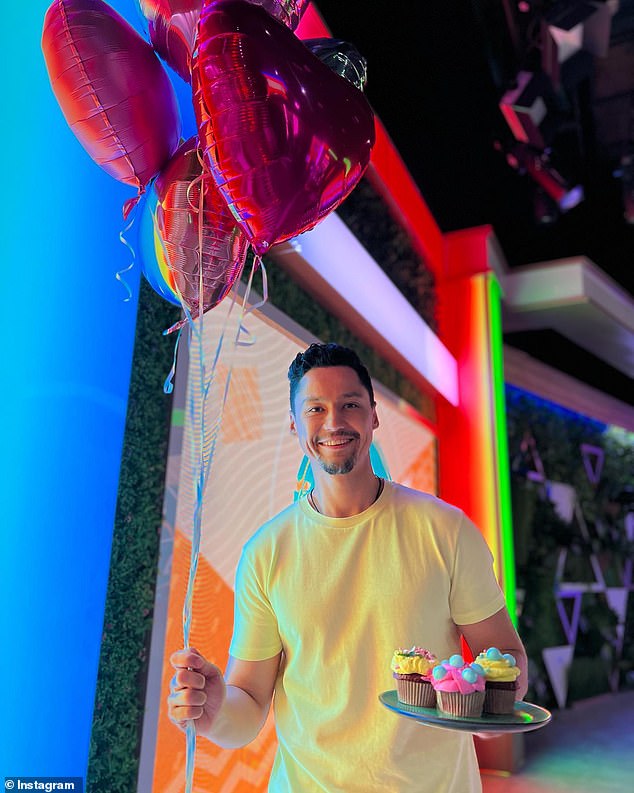 Lee (pictured) was born in Crimea and, as well as being a local presenter and actor, was known for his voice dubbing work in Lion King and the Hobbit

Five days ago Lee posted a photo of himself in military gear, with the caption ‘LET’S UNITE’.

His last photo, tagged in Irpen two days ago, was captioned: ‘For the last 48 hours, there is an opportunity to sit down and take a picture of how we are being bombed, and we are smiling, because we will manage.’

Sergiy Tomilenko, Chairman at the National Union of Journalists of Ukraine, shared a tribute to the late actor on his Facebook page.

It read: ‘(Pasha Lee) went to fight for Ukraine from the first days of the war and died in Irpen, where there are still fierce battles with Russian occupants.

‘The National Union of Journalists of Ukraine expresses its sincere condolences to (Pasha’s) family and friends.

‘Our words of support to all the staff of the DOM channel, which embodies the noble mission of broadcasting for the deoccupation of Donetsk and Luhansk regions and Crimea.’ 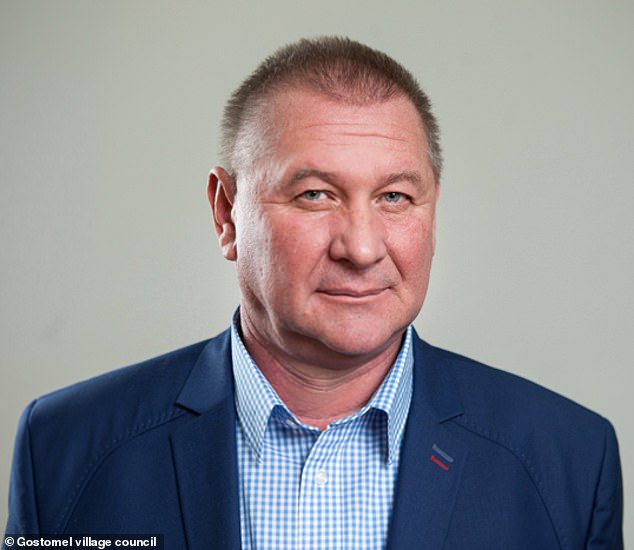 Yuriy Prilipko (pictured), 61, a hero mayo of the Gostomel village, north-west to capital Kyiv, was handing out bread and medicine to vulnerable civilians when he was shot dead

It added the actor’s death was confirmed by Julia Ostrovska, Head of the UATV/DOM Platform, who tearfully told the union: ‘A new season started on January 31 – a new entertainment TV program “Day at Home” was launched.

‘Among the six TV presenters, Pasha was the happiest and sunniest.’

Lee was born in Crimea and, as well as being a local presenter and actor, was known for his voice dubbing work in Lion King and the Hobbit.

Mayor Prilipko was called a ‘hero’ in a tribute post by Gostomel’s village council on social media.

It read: ‘He never refused help to anyone. No one forced him to go under the bullets of the occupiers. 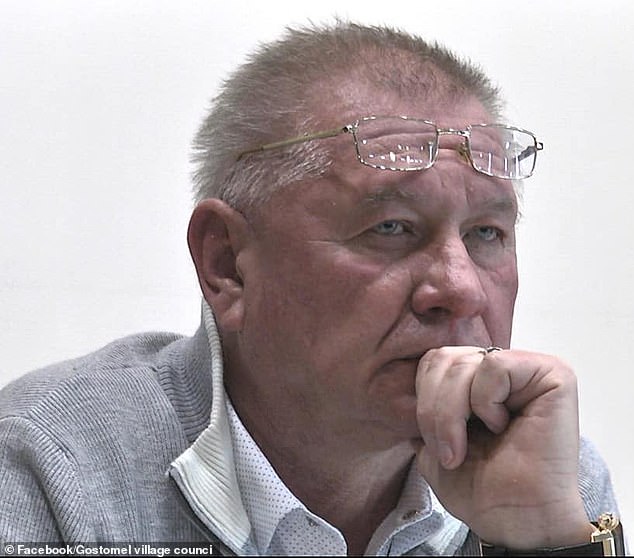 ‘He could, like hundreds of others, sit in the cellar.

‘And he made his choice. He died for the community, he died for Gostomel, he died as a hero.’

The local mayor also died fighting for his country as Russian forces’ brutal attacks continue on day twelve of the invasion.

Yuriy Prilipko, 61, a ‘hero’ mayor of the Gostomel village, north-west to capital Kyiv, supported his community by handing out bread and medicine to vulnerable civilians, and has been shot dead.

Both men were praised for their work supporting Ukrainians in their fight against the invasion.

It comes as the invasion of Ukraine enters its twelfth day as cities were hit by fresh bombardments, with the war-torn country’s president Volodymyr Zelensky vowing that ‘God will not forgive’ and Ukraine ‘will not forget’ the slaughter of civilians by Russian, saying a ‘day of judgement’ is coming for them.

Zelensky, in a late-night address to his countrymen on the Orthodox Christian holiday of ‘Forgiveness Sunday’, recalled how a family of four were among eight civilians killed by Russian mortars while trying to flee the city of Irpin – near Kyiv – earlier in the day. ‘We will not forgive. We will not forget,’ he told listeners.

‘We cannot forgive the hundreds upon hundreds of victims. Nor the thousands upon thousands who have suffered,’ he added. ‘God will not forgive. Not today. Not tomorrow. Never.’

Readers of Mail Newspapers and MailOnline have always shown immense generosity at times of crisis.

Calling upon that human spirit, we are supporting a huge push to raise money for refugees from Ukraine.

For, surely, no one can fail to be moved by the heartbreaking images and stories of families – mostly women, children, the infirm and elderly – fleeing from Russia’s invading armed forces.

As this tally of misery increases over the coming days and months, these innocent victims of a tyrant will require accommodation, schools and medical support.

Donations to the Mail Force Ukraine Appeal will be used to help charities and aid organisations providing such essential services.

In the name of charity and compassion, we urge all our readers to give swiftly and generously.

TO MAKE A DONATION ONLINE

To add Gift Aid to a donation – even one already made – complete an online form found here: mymail.co.uk/ukraine

Via bank transfer, please use these details:

TO MAKE A DONATION VIA CHEQUE

TO MAKE A DONATION FROM THE US

US readers can donate to the appeal via a bank transfer to Associated Newspapers or by sending checks to dailymail.com HQ at 51 Astor Place (9th floor), New York, NY 10003