Underworld figure Bilal Hamze has been killed in a drive-by shooting in the middle of Sydney’s CBD.

Emergency services were called to Bridge Street about 10.25pm on Thursday night following reports that a man had been shot by an unknown person in a black vehicle. 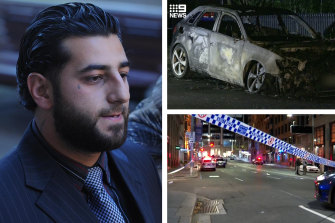 Bilal Hamze and, inset, the crime scene in Sydney’s CBD and a burnt-out car that was found in Northwood, in Sydney’s lower north shore.Credit:Braden Fastier/Nine

Hamze , who was 34, was treated at the scene before being taken to St Vincent’s Hospital, where he died a short time later.

He was the cousin of Brothers 4 Life founder Bassam Hamzy, who is currently in prison at Goulburn Supermax.

A crime scene was established at the intersection of Bridge and Pitt streets, which has been forensically examined.

As of 7am on Friday, Bridge and Grosvenor streets were closed between Pitt and York streets while police remained on the scene.

A burnt-out car has been found on Fleming Street, in the lower north shore suburb of Northwood, where police have established another crime scene. A link to the killing is yet to be confirmed.

Hamze’s mother, Maha, was in 2013 the victim of a shooting, receiving eight bullet wounds to her legs when 21 shots were fired into her Auburn home, in Sydney’s south-west. A man, who cannot be named, was in 2014 found guilty of shooting with intent to murder her.

Prosecutors alleged the attack stemmed from a debt collection dispute between the man and Bilal Hamze.

The court heard that Bilal Hamze and his cousin, notorious crime figure Bassam Hamzy, were involved in collecting $20,000 for the man but trouble broke out after Hamze demanded a $5000 recovery fee from the man’s mother.

The crown said the man went to Ms Hamze’s home in retaliation and fired the shots.

Hamzy is one of the country’s most notorious criminals, jailed for life in 2002 for a shooting murder at a Sydney nightclub in 1998 and also convicted for conspiring to murder a witness due to give evidence against him.

Mejid Hamzy, brother of Bassam Hamzy, was in October last year shot dead at the door of his Condell Park home, in Sydney’s south-west.

Police earlier this year established a new gang squad in response to the escalating conflict between members of the Hamzy and Alemeddine families.