Counter-terrorism investigators raided an Australian neo-Nazi cell late last year whose members include a 23-year-old tradesman acting on behalf of a violent international organisation to recruit young men to their cause.

The federal police and ASIO have been investigating allegations that tradesman Matthew Golos was encouraging others to join the racist extremist group. Among them is a Perth-based neo-Nazi who later purchased materials that could be used to make an improvised explosive device. 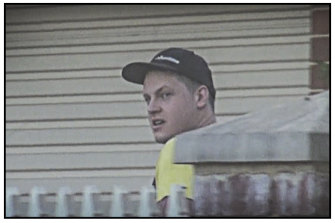 A major investigation by The Age, The Sydney Morning Herald and 60 Minutes has also revealed that Mr Golos used the online alias Volkskrieger – German for “people’s warrior” – and encrypted communications platforms to lure Australians as young as 16 to join dangerous US-based neo-Nazi organisation The Base.

The identity of Volkskrieger has been one of the mysteries on Australia’s extremist scene after it emerged he was appointed The Base’s key Australian recruiter in late 2019.

In an exclusive interview, ASIO’s director-general Mike Burgess declined to identify specific targets of his agency but said he was alarmed to uncover connections between Australians and “material from The Base offshore”.

“That connection disturbs us because obviously it may well lead to people going down a path of radicalisation, and that’s our principal concern,” Mr Burgess said. 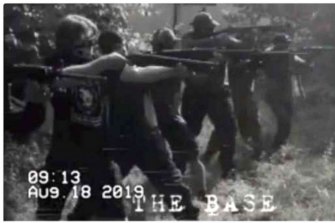 A photo included in an FBI court filing shows unidentified members of the neo-Nazi group The Base in training.

The Base has been banned as a terror organisation in Canada and the UK and has been investigated in the US by the FBI, which has charged several of its members in connection to violent crimes. Formed in the US in 2018 and with membership cells in North America, South Africa and the United Kingdom, The Base supports “accelerationist” theory, which involves neo-Nazis attempting to bring about a race war or societal collapse through violence.

The Australian Federal Police said in a statement in response to questions about Mr Golos that its counter-terror teams had launched “disruptive” raids in Perth late last year. The raids targeted Mr Golos and a local extremist group he is a member of, the Society of Western Australian Nationalists. Police say they launched the raids because “some individuals were agitating for the group to transition to a more aggressive posture”.

The raids had “disrupted” the police suspects and there was no imminent threat of a terror attack, police said, although no further details could be made public.

Mr Golos lives with his parents in the working-class Perth suburb of Ballajura, where he played football for the local team and attended a nearby high school. Repeated efforts to contact him and his relatives have been ignored.

This masthead’s investigation can also reveal that one of the Australians Mr Golos sought to recruit purchased materials that could be used to make a bomb.

James Greig, a Perth-based neo-Nazi, purchased two dozen cold packs of ammonia nitrate along with other materials that could be used to make an improvised explosive device in April 2020, according to multiple sources speaking on condition of anonymity. Months earlier, he had boasted on leaked recordings from vetting sessions for The Base about his access to weapons.

Mr Greig used two online aliases, AdvocateCannabilism and James Jameson, to disguise his identity in his discussions with Mr Golos in November 2019, but multiple sources and open source intelligence confirmed his identity.

During a vetting call with Mr Golos and The Base’s American leaders in November 2019, the 38-year-old Greig said he got “enjoyment watching … [terrorist Brenton] Tarrant do his thing”. Mr Greig also told Mr Golos he wanted to help build a group of networked survivalists across the country with access to firearms, legal access to firearms, so there’s no questions asked by the alphabets [the AFP and ASIO]”.

Mr Golos agreed to meet Mr Greig in person after hearing him espouse these views. There is no suggestion Mr Golos or Mr Greig plotted an actual terrorist attack. Mr Greig was charged last year with weapons and drugs offences and is still an active extremist. ASIO and the AFP have warned a key danger of neo-Nazi language and rhetoric is that it could inspire political violence by a lone wolf or small cell.

Western Australian court records show his case was referred from Joondalup Magistrates Court to the Perth Magistrates Start Court, which is a program for offenders with mental health issues. To be eligible for this program, a person has to admit their offences. He took part in that program between October 2020 and July 2021.

Mr Greig is one of at least five Australians who Mr Golos helped The Base recruit in 2019 and 2020, according to a trove of leaked communications leaked from The Base’s US leadership cell and which contain the voices and online aliases of aspiring neo-Nazis across the globe.

In March, The Age and Herald revealed how the documents and tape recordings leaked from The Base’s inner sanctum had captured the group’s leader, Rinaldo “The Wolf” Nazarro, appointing an Australian using the handle “Volkskrieger” to run The Base’s nascent Australian operation.

But despite extensive reporting and media investigations – in March the ABC asked members of the public to help identify Volkskrieger – his identity remained hidden until multiple sources identified Golos to this masthead.

The leaked Base recordings were first obtained by US investigative journalist Jason Wilson for the Southern Poverty Law Centre, which then provided them to The Age and The Sydney Morning Herald.

The recordings show the organisation was open to recruiting Australian teenagers and that Brenton Tarrant’s murderous mosque rampage in New Zealand in March 2019 was admired by some.

In his recorded vetting interview in late 2019, a 21-year-old Brisbane applicant told The Base leadership: I “fully wholeheartedly agree with what he [Tarrant] did.”

Another applicant, a 16-year-old boy from Canberra, told The Base’s leaders that his father was a government security official who did not support his views and that the teen had been kicked out of a local nationalist group for “promoting violent tactics” and supporting Tarrant.

Other Australians who have attempted to join The Base include former federal One Nation candidate Dean Smith.

Mr Smith, who unsuccessfully contested the 2019 federal election, told The Base during his vetting interview that “I have come to realise that there really is no political solution” and that, “if I want to leave a legacy for my children, then I’m going to have to do something about it”.