Parts of Victoria are bracing for heavy rainfall, damaging winds and possible flooding as the weather system drenching NSW moves towards Gippsland.

The Bureau of Meteorology, in a severe weather warning for East Gippsland and the Otways on Tuesday morning, said that it expected localised rainfall of between 80 millimetres and 200 millimetres from midday for parts of the state. 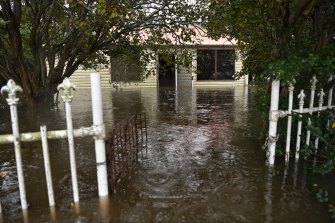 Damaging winds are also expected to reach up to 70km/h, gusting to 100km/h before easing late on Wednesday.

“That is when drainage doesn’t have enough time to get rid of water on roads, if you have a lot of rainfall at the same time,” she said.

Riverine flooding, caused by the accumulation of rainfall in rivers, is also possible for the Snowy River, with a minor flood warning for the waterway issued on Tuesday morning.

The Bemm, Cann, Genoa and Snowy River catchments are on flood watch.

“That warning may extend today into other rivers of the Gippsland area,” Ms Palej said.

She said locations that could be affected by the forecast severe weather included Wonthaggi, Mallacoota, Cann River, Chandlers Creek, Combienbar and Bonang.