Watch owned by HITLER that bears his initials could fetch £3.4M

Time Kampf! Watch owned by HITLER that bears his initials and was looted by a French soldier from his mountain hideout could fetch £3.4M at auction

A gold watch belonging to Hitler that was looted from his mountain hideout by a French soldier in the closing days of the Second World War is set to fetch more than £3million at auction.

The timepiece, which was manufactured by Swiss luxury watchmaker LeCoultre, features the Nazi leader’s initials, the Swastika and the German imperial eagle.

It also bears three dates – Hitler’s birthday, the date he was appointed chancellor of Germany, and the date of the Nazi party’s 1933 election victory.

The watch is believed to have been given to Hitler in 1933 by the Nazi party that he led after he was elected as Germany’s chancellor.

It was taken by a French soldier from the Berghof – Hitler’s mountain home in Bavaria, southern Germany, on May 4, 1945. Hitler had taken his own life in his Berlin bunker just five days earlier.

Now the watch is set to fetch up to $4million (£3.4million) when it goes under the hammer at Alexander Historical Auctions in the US state of Maryland. 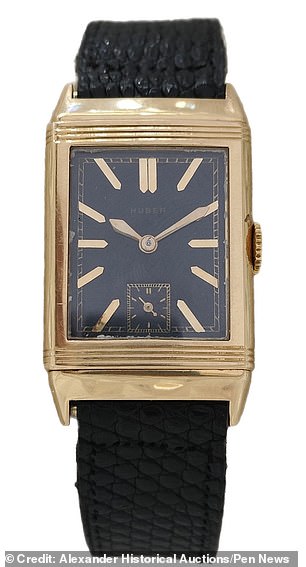 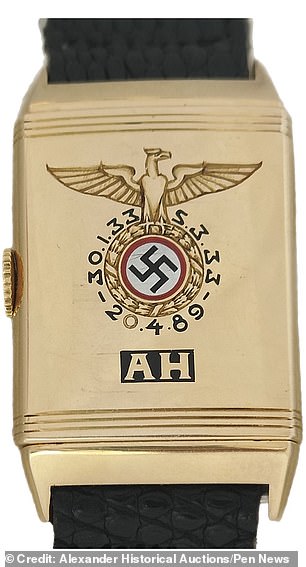 A gold watch belonging to Hitler that was looted from his mountain hideout by a French soldier in the closing moments of the Second World War is set to fetch more than £3million at auction. The timepiece, which was manufactured by Swiss luxury watchmaker LeCoultre, features the Nazi leader’s initials, the Swastika and the German imperial eagle

Bill Panagopulos, president of the auction house, said a Hitler watch had never before been offered for sale publicly.

He said: ‘The watch was given to Hitler probably in 1933 after he was made chancellor of Germany and essentially gained full authority over every aspect of the administration of the country.

‘It was given to him most likely by the Nazi party itself in recognition of his achievement and in thanks for elevating the party to power.’

He continued: ‘It is absolutely unique! There has never been another Hitler watch ever offered at auction, and our example has absolutely solid provenance.

‘There are plenty of Hitler relics out there and we have sold hundreds of pieces of his tableware, clothing, furniture, and so on. 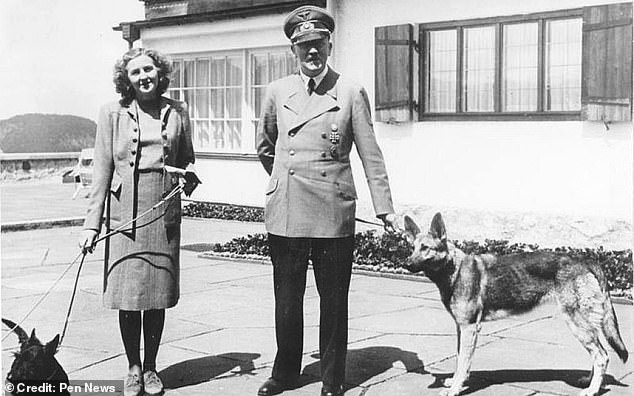 Hitler is seen above at the Berghof with his long-term girlfriend Eva Braun, who became his wife the day before the pair took their own lives. Hitler is seen holding his German Shepherd dog Blondi, whilst Eva has her two Scottish Terriers Negus and Stasi 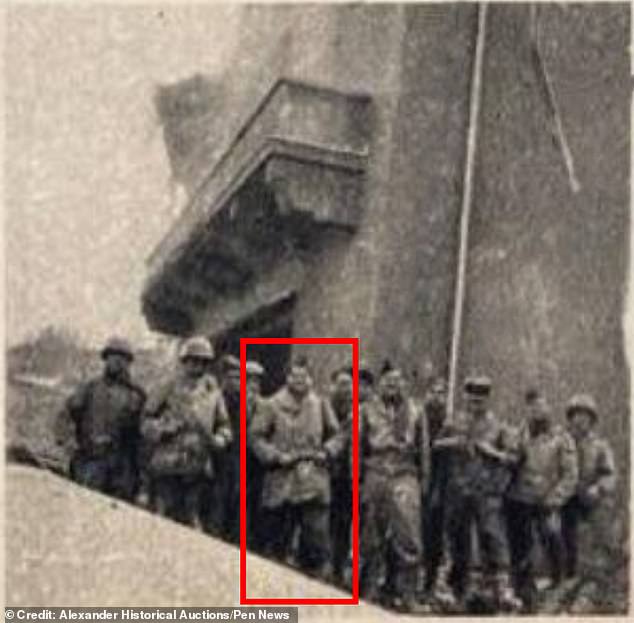 French soldier Sergeant Robert Mignot (highlighted above) took the watch after storming the Berghof with his unit, the Regiment de Marche du Tchad. The soldiers are seen outside the Berghof

‘But a watch is more personal than almost anything else.’

They arrived shortly before American troops and found that the residence had recently been abandoned.

The soldiers then looted whatever they could carry in their backpacks, with Hitler’s personal effects being the most prized souvenirs.

After bringing the watch back to France, Mignot later sold it to his cousin, whose grandson has now put the heirloom up for auction.

‘We aren’t offering this in homage to the worst man who ever lived,’ he said.

‘It is instead an incredibly rare historic relic, deeply evocative of one of the darkest periods in world history and thus especially important.’

The watch itself is reversible, allowing the case to be rotated so that it faces inwards, protecting the face and revealing the engraving.

Though the components are from LeCoultre, the assembly and engraving of the device seems to have been completed by Andreas Huber – official watch supplier to the Royal Court of Bavaria.

The auctioneer said Jaeger-LeCoultre had no records pertaining to the watch, while any wartime documents from Huber were lost when their factory was bombed and burned down in 1944.

However there is correspondence available with the Swiss watchmaker concerning the provenance of the timepiece.

Meanwhile a letter from Mignot’s daughter authenticating the watch is included with the sale.

It was Hitler’s retreat, tucked away in the Bavarian Alps, away from the bustle of Berlin.

The Nazi leader spent more time at the Berghof than anywhere else during the Second World War.

It was also one of the most widely known of his headquarters, located throughout Europe.

The Berghof was built in 1916 and rented to Hitler in 1928. He then bought the building in 1933 with the proceeds from his political manifesto Mein Kampf, and set about extending it.

He even had a spread in Homes and Gardens magazine in 1938. The retreat also became a tourist attraction in the mid 1930s with people queuing up to get a glimpse of the leader. 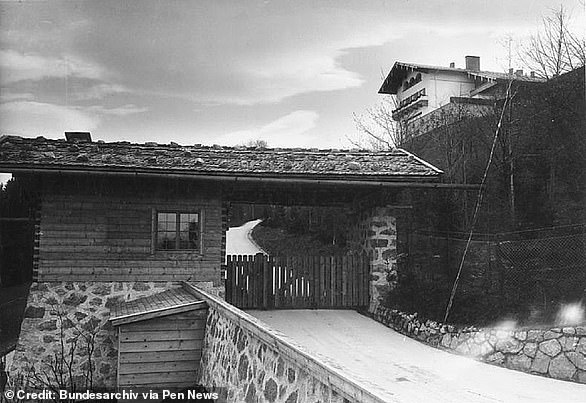 It was Hitler’s retreat, tucked away in the Bavarian Alps, away from the bustle of Berlin. Above: The entrance to the Berghof

Before the war several British leaders even visited the dictator at the retreat, including former Prime Ministers Neville Chamberlain and David Lloyd-George and the Duke and Duchess of Windsor.

The building itself was heavily modified in the run up to the war so that Hitler could use it as a base.

Hitler left it for the last time in mid 1944 to run the final stages of the war from his eastern front headquarters in Poland.

In April 1945, 12 days before the Germans surrendered, the house was bombed by hundreds of British Lancaster Bombers.

It was then set on fire by retreating SS troops in early May, and looted after Allied troops reached the area.

The burnt out shell was demolished by the West German government in 1952.