It was only eight minutes, but for Melbourne mother Sophea Mutsaers it felt like a lifetime. 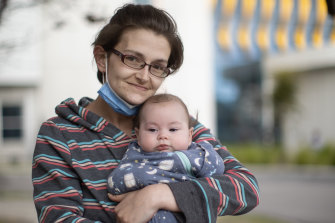 Despite her calls being answered almost straight away during previous incidents with her older daughter, who was born with a heart condition, this time the call went unanswered for minutes.

“It just kept ringing and we thought, what’s going on? [The call] wasn’t answered for 8½ minutes. In this time, I’d done two rounds of CPR on my daughter,” Ms Mutsaers said.

To her relief, Maddie began to breathe again five minutes after having stopped, and she was rushed to hospital once an ambulance arrived. But Ms Mutsaers, of Endeavour Hills, is still unable to shake the image of her daughter turning blue.

“When I lie down to go to sleep at nighttime, I just keep seeing her,” she said. “I don’t feel safe being at home because you don’t know how long you’re going to have to wait for the [triple-zero] call to connect.”

Authorities are also investigating the case of a three-year-girl who died from a cardiac arrest near Bendigo after the family’s triple-zero call was placed on hold for a minute and 41 seconds, longer than the target time of five seconds that was almost always met before the coronavirus pandemic.

Amid warnings that the state’s health system will struggle to cope with an expected rise in hospital admissions as a result of COVID-19, Ms Mutsaers said that after her experience last week she was deeply concerned about the coming months. 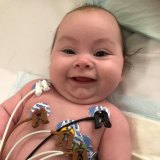 “Eight minutes is way too long. Anyone that doesn’t know CPR, they’ve got no chance of bringing them back … That’s just being blunt and honest and people need to be prepared,” she said.

“All these people that are going to be calling and needing help aren’t going to get it if we don’t decrease the call volume.”

Ms Mutsaers said she was sharing her story to remind people to only call triple zero in an emergency, echoing comments made by ESTA chief executive Marty Smyth last week urging Victorians to call triple zero only when they genuinely needed help.

“You need to think, is this an emergency?” Ms Mutsaers said. “Is this really necessary for me to be calling an ambulance? I want to try and get people to think about whether their situation is that dire that they need an ambulance.”

An ESTA spokeswoman said the organisation apologised to the family for their wait.

“ESTA has reviewed the call and because of the almost unprecedented demand on the day, the call was answered within eight minutes, outside ESTA’s target range.”

She said a third of calls to triple zero for an ambulance did not actually need one.

Victorian ambulance union state secretary Danny Hill said the state’s emergency call service had been under so much strain in recent months that it had almost become the norm for people to experience life-threatening delays.

“There might be 20 calls that are waiting between five and 10 minutes now. This is happening quite frequently,” he said. 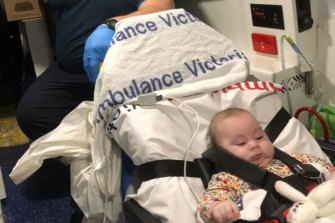 Ms Mutsaers said she had to wait eight minutes when she called triple zero. The target time is up to five seconds.

“Every one of those cases could be the cardiac arrest case, a choking baby, the person who has had a stroke … every minute that ticks by in a scenario like that reduces the chance of survival.”

Doctors say baby Maddie, who has been back to hospital several times since last Wednesday, may have a problem with her airway. They were still doing tests on Monday to find out more. She also has epilepsy.

Her older sister, Eliza, 11, had to have heart surgery as a baby and had tracheomalacia, a condition where the cartilage of the windpipe is soft and can cause blocked airways. She has been admitted to hospital more than 50 times.

Ms Mutsaers praised the work of Victoria’s emergency services and hospital staff, who she has dealt with many times over the years, but also stressed the importance of learning CPR and first aid, particularly for parents.

“I’m so thankful that I knew what to do. If I didn’t, she wouldn’t be with me today. And it’s scary to think,” she said.

“I want people to look it up and do their first aid and CPR and get your friends and family talking about it all … sometimes help isn’t there when you need it. It’s always better to upskill yourself.”

An Ambulance Victoria spokeswoman said the service had also been in contact with Ms Mutsaers.

“While there was no delay in the ambulance response, we are working closely with ESTA to ensure everything is being done to connect us with our patients in the quickest possible time,” she said.