‘We’ve got the votes’: Republicans push to fill Ginsburg vacancy before election

Washington: It appears all but certain that US President Donald Trump will have the numbers to fill the Supreme Court seat left vacant by Ruth Bader Ginsburg, and the odds are shortening he will do so before election day on November 3.

With Trump due to announce his nominee on Sunday (AEST), Republican senators have signalled they will move quickly to advance his nominee's appointment to the nation's most powerful court. 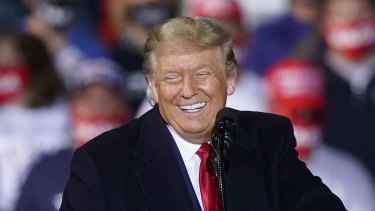 Trump: all smiles at a rally in Ohio earlier this week.Credit:AP

Filling the seat will allow Republicans to lock in a 6-3 conservative majority on the court that will likely take years to reverse.

Trump has said he will definitely select a woman as his nominee.

Former Republican presidential nominee Mitt Romney announced on Wednesday (AEST) that he would support the nomination process advancing this year, ending any hope among Democrats that they could block the process before inauguration day on January 21.

"The constitution gives the President the power to nominate and the Senate the authority to provide advice and consent on Supreme Court nominees," Romney said in a statement. 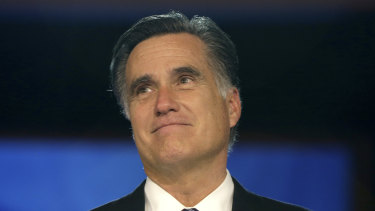 "Accordingly, I intend to follow the constitution and precedent in considering the President's nominee."

Romney's decision was keenly anticipated given he has been unusually critical of Trump and was the only Republican senator to vote in favour of removing him from office during his Senate impeachment trial this year.

"My liberal friends have over many decades gotten very used to the idea of having a liberal court and that's not written in the stars," Romney said.

Two Republican senators – Lisa Murkowski of Alaska and Susan Collins of Maine – have said they do not support filling the Ginsburg vacancy this year, short of the four Republican votes required to stop the process.

In an interview on Fox News, Republican Senator Lindsey Graham said: "We've got the votes to confirm Justice Ginsburg's replacement before the election."

Graham, the Chair of the Senate Judiciary Committee, has been accused of hypocrisy because of his prominent role opposing the nomination process of Barack Obama's Supreme Court nominee, Merrick Garland, in 2018.

As recently as October 2018, Graham said that he would not support moving forward with the Supreme Court nomination process in an election year.

He said he had changed his mind because of how Democrats had treated Brett Kavanaugh during his Supreme Court nomination battle.

"We’ve got the votes to confirm the judge, the justice on the floor of the Senate before the election and that's what's coming."

Republicans in tough Senate races – such as Cory Gardner of Colorado and Martha McSally of Arizona – have said they support having a vote on the vacancy this year.

According to a statement released by her granddaughter, Ginsburg said shortly before her death: "My most fervent wish is that I will not be replaced until a new president is installed."

Ginsburg's coffin will lie in state at the US Capitol on Saturday (AEST) following two days at the US Supreme Court.

Our weekly newsletter will deliver expert analysis of the race to the White House from our US correspondent Matthew Knott. Coming soon. Sign up now for the Herald‘s newsletter here, The Age‘s here, Brisbane Times‘ here and WAtoday‘s here.