‘We’ve taken him on his last run’: Fond farewell for Archie Roach

Engines roared, clapsticks clicked and fans called Archie Roach’s name as a hearse flanked by dozens of motorbikes pulled away from Melbourne sites significant to the late singer-songwriter.

Friends, family members and fans whose lives were touched by Roach, a celebrated musician and Gunditjmara and Bundjalung elder who died near his home in south-west Victoria last month, took a moment on Monday morning to say farewell and celebrate their memories of him. 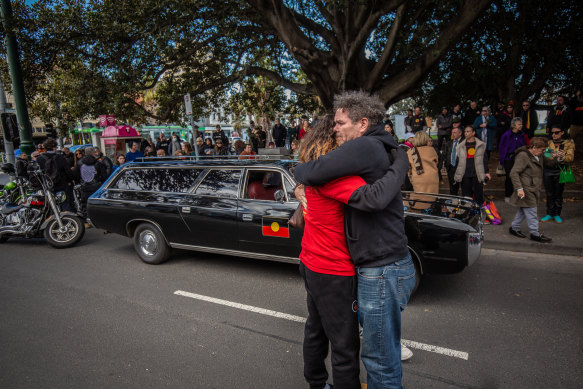 Archie Roach’s body being escorted by the Southern Warriors Aboriginal Motorcycle Club next to Cleve Gardens in St Kilda.Credit:Scott McNaughton

“My earliest memories were waking up in the morning with him singing in the kitchen,” John Brigham, whose father Andy was a foster son of Roach, said. “It used to be really special.”

The hearse, a Chrysler Valiant station wagon purchased by the Aboriginal Advancement League in the 1970s and restored five years ago to return the remains of Mungo Man to country, carried Roach’s remains to five sites in Collingwood, Fitzroy, the CBD and St Kilda.

Mutthi Mutthi man Trevor Kelly joined a crowd at the Victorian Aboriginal Health Service in Fitzroy, where he remembered Roach welcoming him into his public housing residence in Reservoir as a teenager.

“That was just somewhere a lot of young lads who had nowhere else to go, or they didn’t have a feed, where everyone around the area knew that you would just cruise around to Archie’s and there would be a pot of stew going,” Kelly said.

The Fitzroy-based health service was formed nearly 50 years ago to help “parkies” – Aboriginal people who gathered in parks and weren’t receiving care at other health services. The parkies later helped fix up the service’s early buildings at “Charcoal Lane” on Gertrude Street.

“Archie is a part of all of that,” Victorian Aboriginal Health Service chief executive Michael Graham said, referring to the singer’s 1990 album, Charcoal Lane. 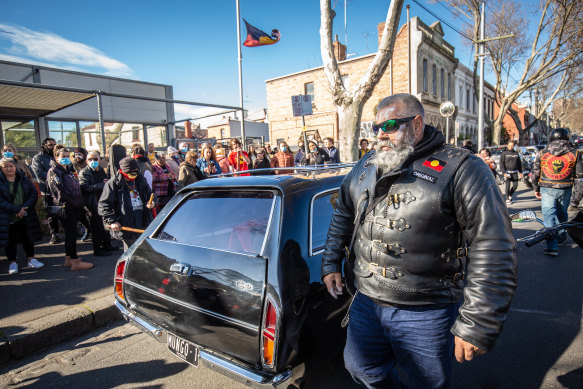 Members of the Southern Warriors Aboriginal Motorcycle Club were among those to pay tribute to Archie Roach outside the Aboriginal Health Service in Fitzroy.Credit:Scott McNaughton

Donna Roach, a Gunditjmara woman and Roach’s niece, credited her uncle, a member of the stolen generation, with bringing her family on her mother’s side back together when she was a teenager.

“That was a blessing in itself,” she said. “Later on in life that was when we seemed to reconnect and we stayed connected.” 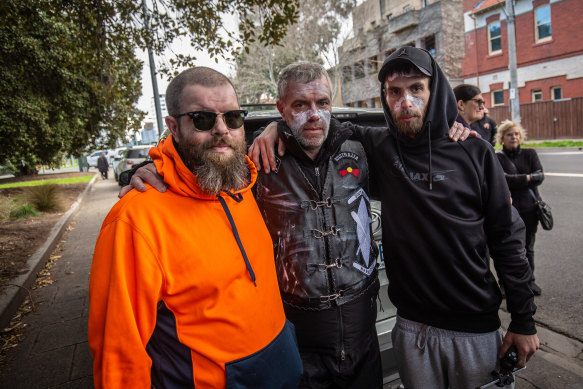 She was among mourners who gathered at Cleve Gardens in St Kilda, a meeting place for Roach, near where foster son Andy Brigham recalled Roach taking him swimming on hot evenings.

“It leaves a big hole in the community; in the entertainment industry as well,” Brigham said. “We’ve taken him on his last run down all the places he used to frequent.”

Brigham’s son Wesley Brigham said he had learned a lot from Roach. “Archie has taught us throughout the years how to be a strong, independent Aboriginal person,” he said.

The Southern Warriors Aboriginal Motorcycle Group then escorted Roach’s remains to Warrnambool, where a funeral is due to take place on Tuesday.

“It’s really fitting because he has the opportunity to say goodbye to everyone,” Kelly said.