Who calls the shots on duck hunting in regional Victoria?

The Victorian government is about to spend $5.3 million on a plan to “grow” recreational hunting, a pastime in which less than one per cent of the population participate. The total taxpayer subsidy for hunting and shooting in our state is huge – more than $65 million since 2014. 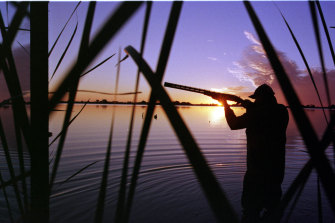 Hunters have access to large areas of the state’s public land.Credit:Jason South

At a time we are concerned about community health and safety, why have there been no risk assessments done of hunting near people’s homes? Why is there no protection for the other recreational users on public land? Hunters have free and largely unmonitored access to more than 50 per cent of public land in Victoria.

According to Labor’s draft Animal Welfare Action Plan, 98 per cent of Victorians abhor animal cruelty. Yet ballistics experts say at least a quarter of the tens of thousands of birds hit in duck shooting each year are not killed outright. Many flap away wounded to die slow painful deaths over days or weeks, while many others live, silently suffering from permanent injuries.

In the absence of any government consultation to do so, our organisation has run surveys to capture the impacts of bird shooting on those who live or work near it. Concerns have flooded in from regional people relieved to be finally heard. Shotgun pellets landing on roofs and in water tanks. 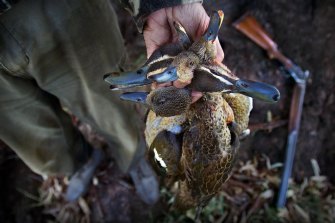 Several surveys have found that most Victorians are opposed to duck hunting.Credit:

Wounded ducks flapping into backyards. Children shrieking in horror, asking why people do this to animals. The shooting is too close to homes, including a retirement village. Hunters’ trespass is common. Businesses want to expand but tourist numbers shrink during duck shooting seasons.

No minister has responded to our invitations to meet, to listen to community concerns. But through Freedom of Information, we discovered that in the last few months, the responsible minister had multiple meetings with duck shooting groups.

The shooting fraternity got a huge boost from former coalition minister Peter Walsh who, as Minister for Agriculture, was responsible for hunting from 2010-2014, but only recently disclosed his membership of hunting lobby group, Field and Game Australia. Perhaps his recent confession was prompted by federal colleague Senator Bridget McKenzie, pinged for non-disclosure of a gun club membership during the “sports-rorts” saga.

Walsh’s masterstroke was the first-ever “economic benefit” survey asking shooters to guesstimate their expenditure on hunting. The results were ludicrously high but have been quoted relentlessly to justify taxpayer subsidies. The millions allegedly spent by duck shooters equate to an incredible $235 per duck bagged. Expensive tastes!

Labor has continued Walsh’s arrangements, without canvassing community views. Taxpayers are still funding the expansion of recreational hunting and grants for gun clubs. Hunting licence fees are very cheap. No other recreational activity has enjoyed such generous and long-term taxpayer backing. Is this an appropriate use of taxpayer monies, particularly now that so many people are struggling financially?

The plan will also promote hunting as an Indigenous tradition, when many would say Indigenous culture did not include the recreational killing of animals with guns. Numerous Indigenous groups are deeply opposed to duck shooting because of desecration of cultural sites, removal of scar trees for firewood, trampling of middens and trashing of wetlands.

Last year our organisation ran a full page advertisement in The Age backed by 43 organisations across business, environment, animal welfare and community sectors. Together we called for a ban on duck shooting. We were ignored by government. Labor’s grass-roots members voted two years ago to review the party’s duck shooting policy but so far have been ignored too.

So who’s calling the shots?

It’s time to call it out. This expensive, pro-hunting program which is draining public funds from other worthy causes is not reflective of community views.

Kerrie Allen is the spokesperson for Regional Victorians Opposed to Duck Shooting.