WHO classifies South Africa COVID strain as variant ‘of concern’, names it Omicron

London: The World Health Organisation has declared the new strain of COVID-19 that emerged in South Africa a variant “of concern” and named it Omicron, after the Greek letter.

WHO’s Technical Advisory Group said Omicron had a large number of mutations that made it concerning, and that preliminary evidence suggested “an increased risk of reinfection” compared to the other variants of concern, including Beta, Gamma and Delta. 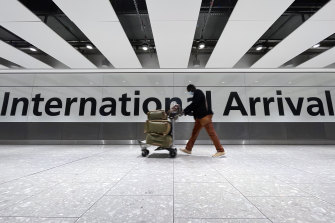 Some countries have restricted flights from parts of southern Africa due to the emergence of the new COVID strain.Credit:Getty Images

The WHO has asked countries to step up their surveillance and genomic sequencing and report all cases and clusters.

Europe, Britain and a host of other countries closed their borders to non-residents arriving from South Africa, Botswana, Eswatini, Lesotho, Mozambique, Namibia, South Africa, Zimbabwe on Friday, local time, due to the emergence of the variant.

There have been no cases detected in Britain, but one found in Belgium.

The first case of the infection, previously called B.1.1.529, was detected in South Africa on November 9.

Britain moved ahead of the WHO’s declaration announcing on Thursday night, local time, that it was closing its borders to South Africa and five other countries on Friday.

Health Secretary Sajid Javid said there were “early indications that suggest it may be more transmissible and vaccines less effective”.

There is no evidence at this stage to suggest the virus causes more serious disease compared to the other variants.