Wuhan: World Health Organisation investigators have visited a research centre in the Chinese city of Wuhan that has been the subject of speculation about the origins of the coronavirus.

The WHO team’s visit to the Wuhan Institute of Virology is a highlight of their mission to gather data and search for clues as to where the virus originated and how it spread.

One of China’s top virus research labs, the institute built an archive of genetic information about bat coronaviruses after the 2003 outbreak of Severe Acute Respiratory Syndrome (SARS). That has led to unproven allegations that it may have a link to the original outbreak of COVID-19 in Wuhan in late 2019. 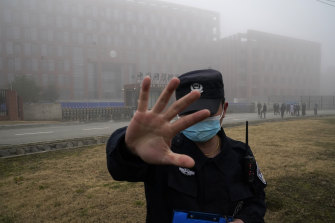 A security guard moves journalists away from the Wuhan Institute of Virology as the WHO team arrives for a field visit on Wednesday.Credit:AP

China has strongly denied that possibility and has promoted theories that the virus may have originated elsewhere or even been brought into the country from overseas with imports of frozen food tainted with the virus, a notion roundly rejected by international scientists and agencies.

The institute’s deputy director is Shi Zhengli, a virologist who worked with Peter Daszak, a zoologist on the WHO team mission, to track down the origins of SARS that originated in China and led to the 2003 outbreak. She has published widely in academic journalists and worked to debunk theories espoused by the former Trump administration and other American officials that the virus is either a bioweapon or a “lab leak” from the institute. 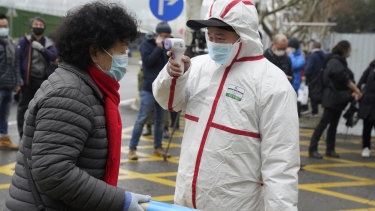 A worker in protective overalls takes the temperature of a woman entering the Hubei Centre for Disease Control and Prevention as the World Health Organisation team makes a visit.Credit:AP

Confirmation of the origins of the virus is likely to take years. Pinning down an outbreak’s animal reservoir typically requires exhaustive research including taking animal samples, genetic analysis and epidemiological studies. One possibility is that a wildlife poacher might have passed the virus to traders who carried it to Wuhan.

The first clusters of COVID-19 were detected in Wuhan in late 2019, prompting the government to put the city of 11 million under a strict 76-day lockdown. China has since reported more than 89,000 cases and 4600 deaths, with new cases largely concentrated in its frigid north-east and local lockdowns and travel restrictions being imposed to contain the outbreaks.

New cases of local transmission continue to fall with just 15 reported on Wednesday as Chinese heed government calls not to travel for the Lunar New Year holiday later this month.