Who is the strongman – Xi Jinping or this lone protester who dared to defy him?

He was alone. Dressed as a construction worker in yellow hard hat and orange overalls, the lone protester chose a famous bridge in Beijing to make his declaration on two bold banners.

He knew he’d have very little time, a few minutes at most, under the all-seeing eye of the world’s most advanced techno-surveillance state. So his protest chant, broadcast through a loud-hailer, seems to have been pre-recorded. And he lit a fire spewing black smoke to make sure he was seen. 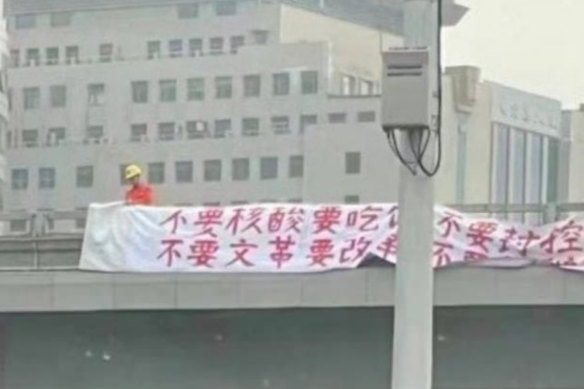 Brave protest: Peng Lifa with his banners on the Beijing overpass last week.Credit:Twitter

He wasn’t famous or powerful. He’s a physicist. He knew he’d have one chance before disappearing into the black maw of the regime’s secret prisons. Not that fame or power are any protection. A well-connected billionaire property tycoon, Ren Zhiqiang, was jailed for 18 years for calling President Xi Jinping a “clown” over COVID policy.

“Students strike, workers strike, remove the dictator and state thief Xi Jinping” declared one of the red-lettered banners strung across the Sitong Bridge in Beijing’s Haidian district on Thursday.

The other: “We want to eat, not do coronavirus tests; reform, not the Cultural Revolution. We want freedom, not lockdowns; elections, not rulers. We want dignity, not lies. Be citizens, not enslaved people.”

This single act by a lone protester shook Beijing. “Police arrested him and removed the banners, but photos and videos spread quickly, and then the censors went nuts,” remarked the American China watcher, Bill Bishop, publisher of newsletter Sinocism. “He is a courageous person, and there are some very unhappy Beijing police officers today. This is a massive failure for them right before the 20th [Communist Party Congress], heads will roll.”

It wasn’t just the pictures of the Sitong Bridge protest that censors wiped from China’s internet. People who wrote “I saw it” had their WeChat accounts suspended, even without referring to what “it” was.

The phrase “single spark” was getting traction before it, too, was scrubbed. It refers to a famous revolutionary essay by Mao Zedong titled “a single spark can start a prairie fire”.

“Brave man” and “hero” were deemed sensitive and anyone using them was subject to account deletion and suspension. Before the censors could remove it, he was dubbed “new tank man”, a reference to the lone protester who stood in front of an oncoming tank during the Tiananmen Square massacre in 1989. We don’t know the name of tank man, but we do know the name of the Sitong Bridge protester, thanks to sleuthing by a number of China-watching websites. It is Peng Lifa. 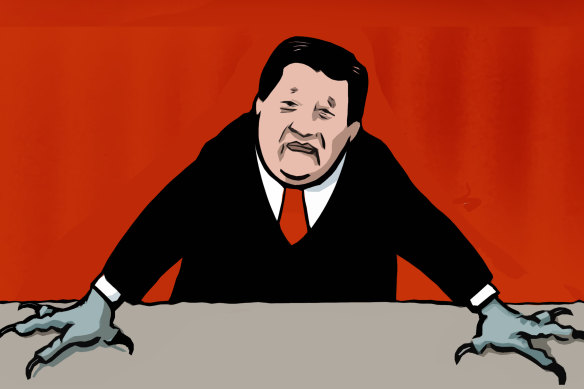 President Xi sometimes is described as China’s “strongman ruler”. And, indeed, this week’s Party Congress is expected to anoint him for a third consecutive five-year term. To do this, he had to break the party’s constitutional rule limiting a leader to two terms. This rule was put in place to prevent the emergence of another Mao Zedong, who ruled unchecked for life while unleashing the chaos and mass death of the Great Leap Forward and the Cultural Revolution.

Xi also has done away with another restraint, the post-Mao system of collective leadership. He already was acknowledged around the world as the most powerful person on Earth. Now he’s set to entrench himself, dangerously unchecked and unchallengeable, as the new Mao.

Why? One word: survival. Xi grew up as the privileged son of a senior party leader. He was a revolutionary hero who’d saved Mao’s life. He also happened to be a political liberaliser; he befriended the Dalai Lama and later opposed the Tiananmen massacre.

But when Xi was nine years old, his father fell foul of factional intrigue in Mao’s court in the midst of the madness of the Cultural Revolution. Xi Zhongxun was purged, his family scattered, his daughter murdered. By age 13, the young Xi was being beaten and degraded, paraded on stage at mass denunciations as a “class enemy”. Crowds screamed insults at the boy. His mother joined in humiliating him to protect herself.

Xi Jingpin was locked up multiple times and at 15 sent to work for six years as a farm labourer in the countryside. He lived in a flea-infested cave for years: “I was very lonely,” he later admitted. “I thought a lot about whether to live or die.”

But rather than turn against this monstrous regime, Xi chose to survive by joining it. He decided that the party was a “system for survival”, according to a friend who knew him as a teenager. A party elder later observed: “Xi Jinping believes political battles must be won at all costs. His father’s life story taught him that lesson, and it has been etched into his mind.”

He rejected his father’s liberal world view, hero-worshipped Mao, and ultimately became as ruthlessly oppressive as Mao himself. In the process, he has persecuted and humiliated a great many powerful people.

“He knows full well that if he did leave office, he and his family would be vulnerable to retribution from his successors,” Kevin Rudd writes in the US journal Foreign Affairs. “So Xi is likely to lead the country for the rest of his life.” He is 69.

In other words, he pursues ever-greater power out of fear for his own survival. He hinted at this in 2000 interview with a Chinese journalist when he spoke of his view of power: “What I see is not just the superficial things: the power, the flowers, the glory, the applause. I see the cowsheds and how people can blow hot and cold.”

Cowsheds? That’s a reference to the Cultural Revolution, when the Red Guards turned cowsheds into jails and torture chambers. Xi is precisely the sort of autocrat Winston Churchill had in mind: “Dictators ride to and fro on tigers from which they dare not dismount.”

Xi may be powerful. But who is the real strongman — Peng Lifa or Xi Jinping? The brave protester risking his life for his principles, or the fearful megalomaniac who dare not allow his people a voice?

The Opinion newsletter is a weekly wrap of views that will challenge, champion and inform your own. Sign up here.