WHO urges people not to talk about 'transmitting' coronavirus

The World Health Organization (WHO) has urged people not to talk about transmitting the coronavirus as it ‘assigns blame’ to those who may be carrying it in a woke message for medical staff.

In its most recent advice for those concerned about the risks of the deadly virus, the group aimed to tackle the so-called ‘social stigma’ around the disease.

It highlighted why COVID-19 is causing stigma and discouraged people from adding country or ethnicity when talking about transmission.

Posting its new guidance to social media WHO said: ‘DO – talk about people ‘acquiring’ or ‘contracting’#COVID19

‘DON’T – talk about people ‘transmitting COVID-19’ ‘infecting others’ or ‘spreading the virus’ as it implies intentional transmission & assigns blame.’ 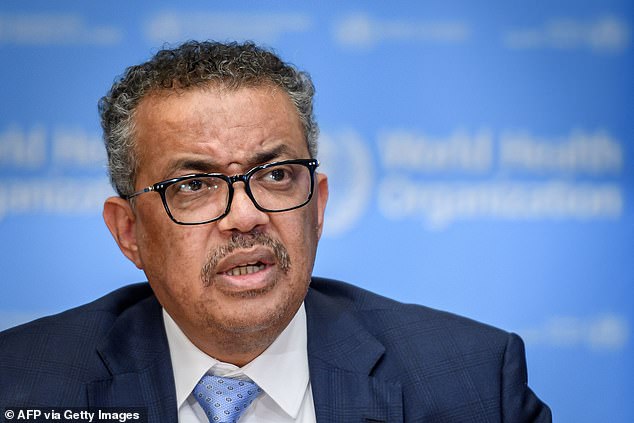 New advice issued by WHO asked people to not talk about the ‘transmission’ of the disease’. Pictured above is the director general of WHO Tedros Adhanom Ghebreyesus 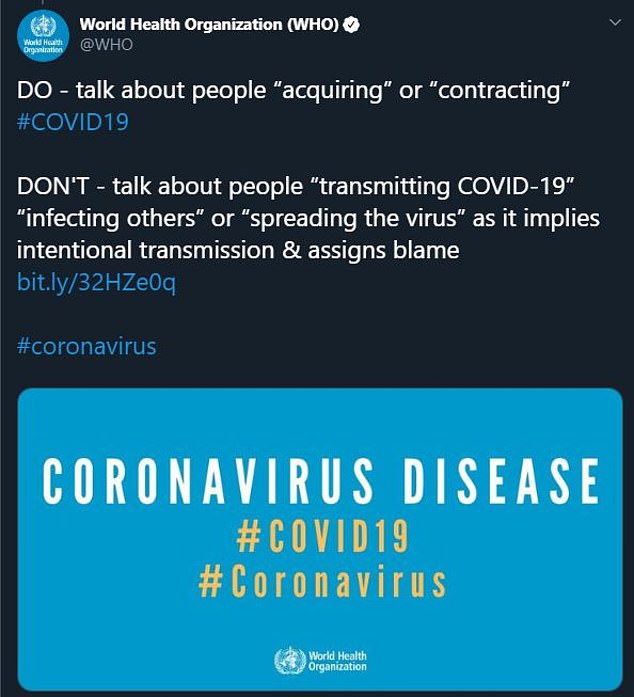 In its new online guide it also said that ‘words matter’ and added that some language may have a negative meaning for some which may ‘fuel stigmatized attitudes’.

‘They can perpetuate existing negative stereotypes or assumptions, strengthen false associations between the disease and other factors, create widespread fear, or dehumanise those who have the disease’.

The guidance comes as several people of Asian decent were attacked by people who claimed to have targeted them because they believed they were carrying coronavirus.

Many on social media have branded the new WHO guidelines as ‘woke’ and questioned why they had to be worried about the feelings of others during what some have labelled as a ‘health crisis’.

One social media user joked: ‘Oh good please tell us more words we can say to stay safe’, while another added: ‘Is this a joke? WHO tells us we are supposed to care about hurt feelings in the middle of a pandemic..#COVID19.’

This is while another decided to re-write WHO’s original post and said: ‘Hey @WHO: DO – Transmit all relevant information so the public can make up their own minds. 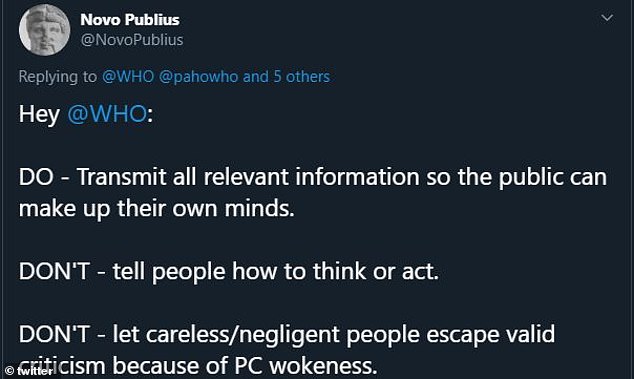 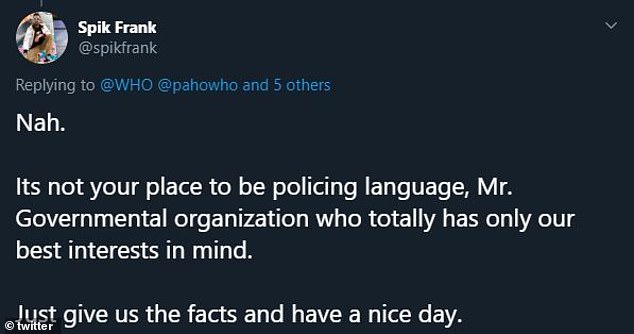 Another added: ‘Nah. Its not your place to be policing language, Mr. Governmental organization who totally has only our best interests in mind. Just give us the facts and have a nice day’.

One chimed in: ‘What a load of PC claptrap!’

As part of the guide it also urges people to ‘do your part’ and has created a whole section on how people should prevent stigma in their communities.

It states:  ‘Governments, citizens, media, key influencers and communities have an important role to play in preventing and stopping stigma surrounding people from China and Asia in general. We all need to be intentional and thoughtful when communicating on social media and other communication platforms, showing supportive behaviors around the new coronavirus disease.’

It then gives communication tips and messages to prevent misinformation about the condition.

So far there have been over 90,000 coronavirus cases worldwide and over 3,000 deaths.