Wild winds have brought down trees and power lines across Victoria, leaving thousands without power, people trapped inside their homes and some towns completely cut off. 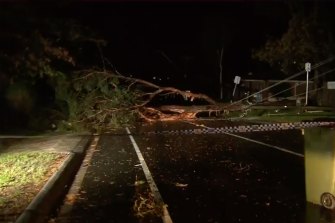 A tree blocks a road in Croydon.Credit:Nine News Melbourne

“Trentham is totally isolated with no roads in or out,” Victoria Police spokeswoman Sergeant Julie-Anne Newman said told 3AW. “Ballarat, Trentham, Ballan, Gordon don’t have any power and Daylesford.”

“Our message to motorists really is to please be vigilant on the roads,” she said. “If you don’t need to be on the roads today, please, please don’t drive in this extreme weather.”

At 6.30am, Emergency Victoria had listed 2018 separate incidents and 44 warnings as flood and winds bombarded eastern Victoria.

About 140,000 Victorian homes are without power after extreme winds lashed the state, according to AusNet Services. Residents are being warned that power may not be restored until Friday. Powercor is reporting nearly 30,000 outages.

The awnings on department store David Jones on Bourke Street have reportedly been stripped off by the wind.

Sergeant Newman said the damage was so widespread and extensive that emergency services were having trouble reaching people injured in the storm.

A screenshot from the state’s emergency website.Credit:Vic Emergency

“A lot of the roads are blocked and police can’t even get in there,” she said.

She said that police had to trek more than 1.5km kilometres to rescue a woman from Olinda with a head injury after they became trapped by trees falling in the surrounding area.

“They trekked over one-and-a-half kilometres through this weather [with] the risk of other trees falling,” she said.

“They’ve made their way to this woman and child and were able to walk them out … the CFA had to clear the trees before they could leave.”

She said winds had started to case on Thursday morning but the bureau had recorded highs last night of 85 km/h at Moorabbin and Melbourne Airport.