The son of legendary zoo owner and gambling club host John Aspinall, who owns Howletts and Port Lympne wildlife parks in Kent, accused the ubiquitous socialite of ‘animal cruelty’ for riding an elephant at a sanctuary in Bali.

‘No wild animal should ever be used like that for human entertainment. And elephants, like all wild animals, need to be able to live free without human interference,’ he tells me. 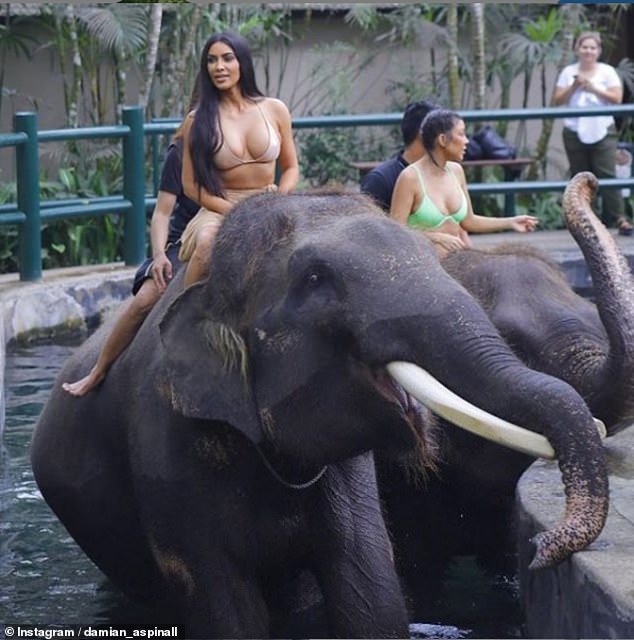 Aspinall openly disparaged the 38-year-old by re-posting a photo of her online in a gold bikini top and matching sarong sitting astride the endangered mammal.

‘People such as Kim Kardashian have vast audiences and really should be using that reach to educate rather than popularising abuse such as this,’ Aspinall said of the brunette, who has 137 million followers on Instagram and visited the elephants with her family.

Let’s hope Aspinall’s attack on the American mother-of-three does not cause any tension at home. His ex-girlfriend, actress Donna Air, has revealed their 15-year-old daughter, Freya, is obsessed with the Kardashian family’s television show. 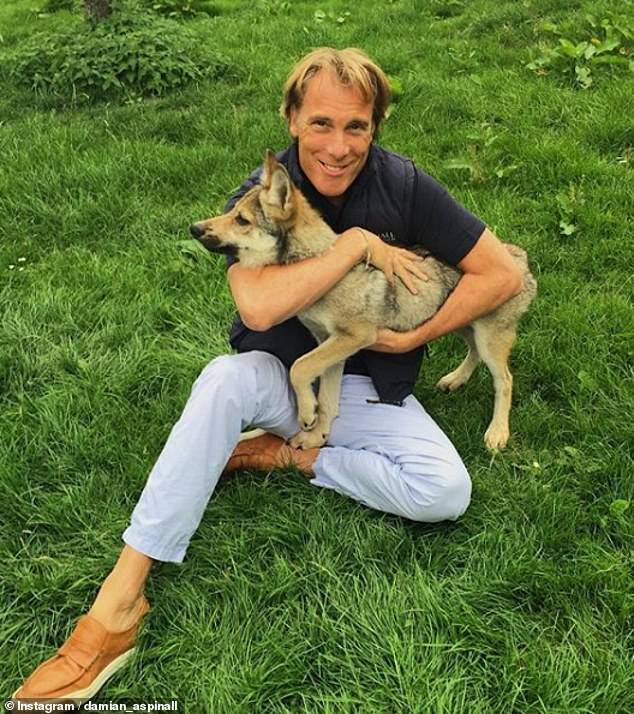 Kardashian defended her visit, saying: ‘We visited an elephant sanctuary that has rescued these elephants from Sumatra where they would have otherwise gone extinct. It is an organisation that is working to save these beautiful animals.

‘We did full research before going.’

Living with Alastair Campbell can’t be easy. Fiona Millar joined her partner at the launch of a BBC documentary in which Tony Blair’s former spin doctor discusses the effect the depression he suffers from has on his family. ‘Coming here, there was a problem with the taxi and the traffic, and Alastair just started to flip out,’ said Millar. ‘And within five minutes it was all my fault.’ ‘I think I’m actually quite easy to live with,’ protests Campbell.

They were stars of Monty Python, but Terry Gilliam and Michael Palin appear to be growing apart.

Gilliam has delivered a stinging verdict on their respective contributions to Handmade Films — the production company established by ex-Beatle George Harrison to make the Pythons’ irreverent masterpiece, Life Of Brian.

Speaking in a new documentary about Handmade’s early rise, Gilliam said: ‘There was no way to stop us. We had Life Of Brian, a success, and Time Bandits, a bigger success. What Handmade was doing was showing people there were other ways to make films and success — until Mike [Palin] started making films.’

Palin hits back. ‘I find that incredibly naughty of him to say that. The rest of the films I made were all good in their own right,’ says Palin, who starred in The Missionary, whose screenplay he wrote, and A Private Function, both of which were produced by Handmade.

‘If I was that bad I should have been given the boot.’

Ronnie Wood’s ex-wife Jo reveals she’s discovered ‘the one and only’ love letter ever written to her by the Rolling Stone with whom she has two children.

‘Ronnie and I didn’t write love letters to each other, but he did write me just one, which I found the other day,’ she tells me.

‘It was really weird. The top shelf in my office, which had this box sitting on it for years, suddenly fell down.

‘The box emptied on the floor and in it had been all my children’s hair, my kids’ little teeth — and Ronnie’s love letter. I forgot I had it.’ 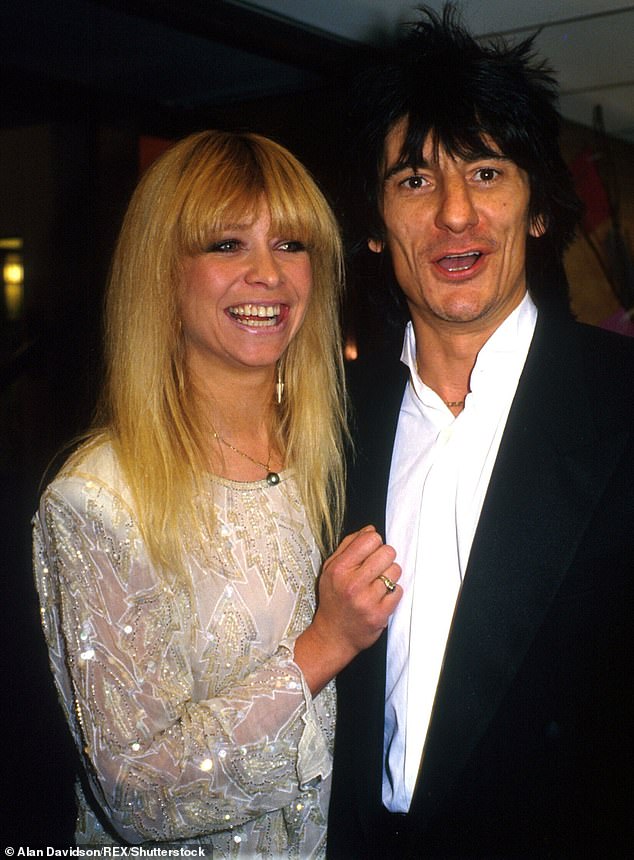 Jo met Wood (pictured in their heyday) when she was 22, but their relationship came to an end in 2008 when he was caught cheating with Ukrainian cocktail waitress Ekaterina Ivanova.

Here comes the next royal bride. The countdown is on for Lady Gabriella Windsor’s wedding in less than two weeks, and the daughter of Prince and Princess Michael of Kent is busy completing her wardrobe for the occasion.

The 38-year-old branding director, who will marry banker Tom Kingston, 41, at St George’s Chapel in Windsor on May 18, was shopping in Chelsea at the weekend for wedding accoutrements.

The countdown is on for Lady Gabriella Windsor’s wedding in less than two weeks, and the daughter of Prince and Princess Michael of Kent is busy completing her wardrobe for the occasion 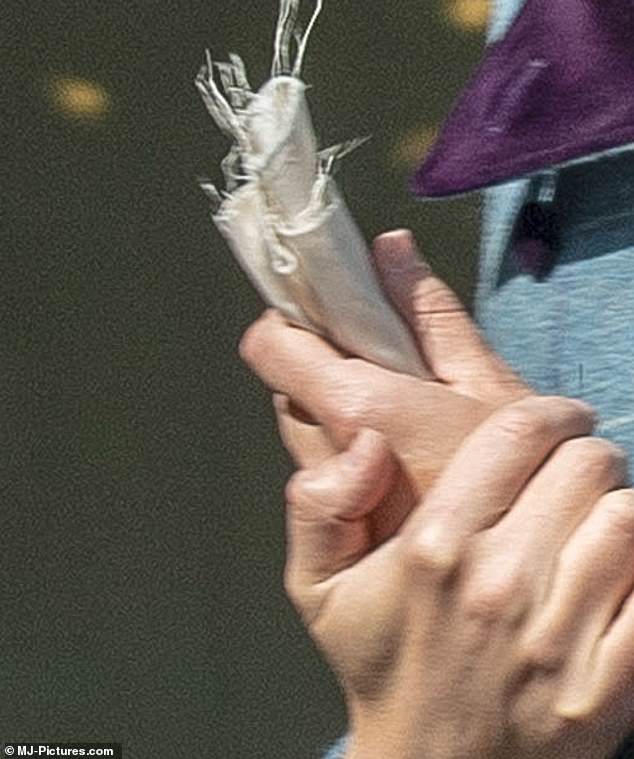 Wearing a chequered blue coat, Lady Gabriella clutched what appeared to be an ivory swatch of a dress, which she held up against some flat shoes in a shop window before doing the same thing at another shop nearby.

The bride-to-be didn’t walk away with any new footwear but, doubtless, she’ll find something in time for the big day.

‘One day I thought, “that’s tight”, because I couldn’t get the ring off,’ the 60-year-old tells me. ‘My doctor said the fact that I’ve only got one little bit is nothing at my age.

‘He didn’t give me any medication, but I’m supposed to drink a lot of fish oil to make sure it doesn’t get worse.’

An extension of Georgia’s personality

As the daughter of Rolling Stone Sir Mick Jagger and Jerry Hall, Georgia May knows how to let her hair down.

The 27-year-old model emulated Rapunzel as she showed off her new hair extensions backstage during a fashion shoot with Italian brand Miu Miu. 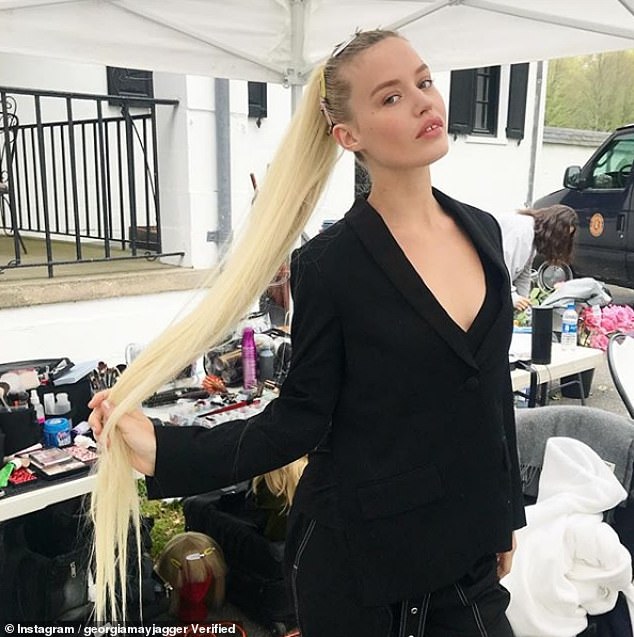 As the daughter of Rolling Stone Sir Mick Jagger and Jerry Hall, Georgia May knows how to let her hair down

Georgia has previously dyed her locks in a mix of blonde and orange — or ‘blorange’.

‘I used to dye my hair pink a lot when I was younger, but my mum didn’t like it,’ she has admitted.

No doubt Jerry, who is famous for her thick mane of golden hair, will approve Georgia’s new look.

Pam Ayres has written an ode to mark the 70th birthday of TV gardener Alan Titchmarsh. ‘May you vanquish every weed, Stay our own much-loved perennial, And never go to seed.’ Titchmarsh has an ardent fan club. When he got his MBE, Alan claims Her Majesty told him: ‘You give a lot of ladies a lot of pleasure.’ Ooh ER!

England captain Harry Kane refused to go home feeling sorry for himself at the weekend after his team Tottenham lost 1-0 to Bournemouth. The 25-year-old instead dropped by the launch of Hollywood star Mark Wahlberg’s restaurant, Wahlburgers, in Covent Garden, where I spotted him patiently waiting to meet the Entourage star. On his best behaviour, Kane shunned the booze and quietly slipped away before 9 o’clock.