Will Smith vs. Chris Rock, Elliot Page, Mila Kunis and ‘CODA’: Highs, lows and head-scratchers of the 2022 Oscars

Who would have thought that 2017’s instantly infamous Best Picture mix-up (aka “Envelopegate”) involving La La Land and Moonlight would hold the title of Most Bonkers Oscar Moment for only five years?

In what was a truly stunning moment during Sunday night’s telecast, eventual Best Actor winner Will Smith assaulted Chris Rock after Rock made a crack about Jada Pinkett Smith’s hairstyle.

It left "WHAT JUST HAPPENED?" and "WAS THAT REAL?" trending on Twitter (yep, both in all caps), and we can't begin any list of highs, lows and head-scratchers without addressing the incident that shocked viewers around the world.

Chris Rock was his usual wise-cracking self while presenting Best Documentary. He teased Denzel Washington for Macbeth, he joked about Javier Bardem and Penélope Cruz. And then Rock set his sights on Jada Pinkett Smith. "G.I. Jane 2, can't wait to see it," he said, referencing the actress's shaved head. Pinkett Smith, who has been public about her hair loss due to the autoimmune disorder alopecia, rolled her eyes. Her husband Will Smith was initially seen laughing. But as Rock continued, Smith, who sat in the front row only feet from the stage, approached Rock with purpose, and then forcefully slapped the comedian across the face. He then calmly turned and returned to his seat.

The actual slap was censored from U.S. screens. Likewise, Smith's subsequent remark was bleeped out and viewers were left wondering whether it was a gag. But reporters tweeting from inside the Kodak Theatre quickly confirmed it was real, as did unedited international feeds that clearly show Smith making contact with Rock and then twice yelling from his seat, “Keep my wife's name out your f***ing mouth!”

Moments later, after being counseled by his publicist and Denzel Washington, Smith took the stage to accept the Best Actor Oscar for King Richard. In a lengthy and teary speech, he apologized to the Academy and the audience but not to Rock.

HIGH: Winners and presenters spoke up strongly for LGBTQ+ rights

The hosting trio of Regina Hall, Amy Schumer and Wanda Sykes set the political tone for the evening when they took direct aim at Florida’s “Don’t Say Gay” bill, singing, “Gay, gay, gay, gay,” at the top of the show, Oscar Isaac-style. Subsequent winners and presenters proudly marched through that door, with Best Supporting Actress winner Ariana DeBose — the first openly queer woman of color to win an Oscar — paying tribute to “anybody who has ever questioned your identity.” Jessica Chastain also referenced “the desire to be accepted for who we are” in her Best Actress speech and told viewers at home that they were “unconditionally loved.” 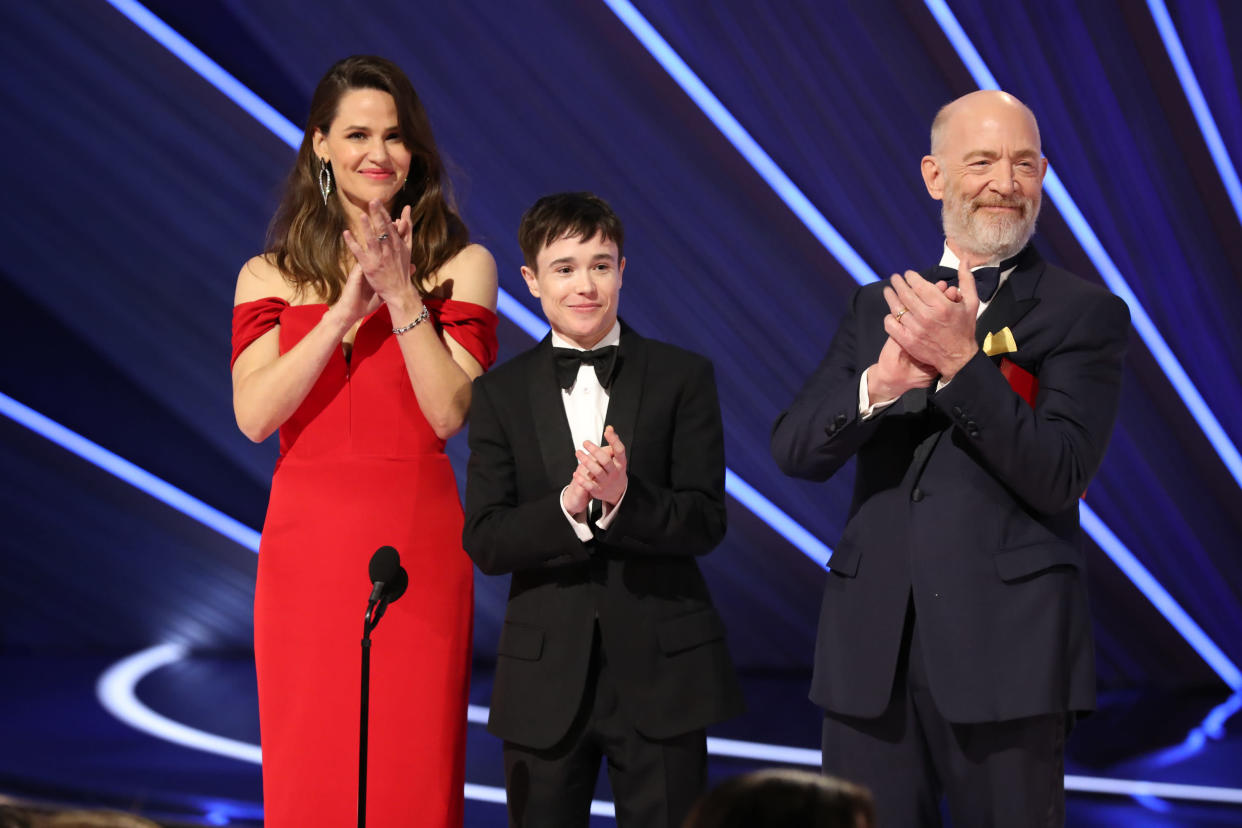 There was plenty of speculation during the lead-up to the Oscars as to what the telecast would do to recognize Ukraine and its people in the face of Russia’s invasion. Would President Vlodymyr Zelensky appear, as co-host Amy Schumer indicated she proposed — and which two-time winner Sean Penn threatened to “smelt” his Oscars over (it not happening)? A New York Post report over the weekend indicated it might, but that never materialized. Still, the producers’ promise to honor the people of Ukraine didn’t turn out to be much more than some brief comments from Ukrainian-born actress Mila Kunis, a moment of silence and attendees adorned in blue ribbons. It’s respectable, but it’s also telling that Saturday Night Live did more.

With so much attention on the telecast’s entertainment value amid continually dwindling ratings, the producers clearly put a huge emphasis on the show’s musical numbers. Luckily, they had some heavy hitters nominated, and in an obvious ratings ploy, even included one song that wasn’t. Beyoncé and at least a few dozen collaborators kicked off the evening with an inspiring performance of her King Richard power ballad “Be Alive” taped from the Compton tennis courts where Serena and Venus Williams began (expect tennis ball-lime green to be in this season). Billie Eilish and Finneas brought a fittingly elegant, piano- and string-backed rendition of their James Bond theme song from No Time To Die. And though “We Don’t Talk About Bruno” — the Encanto sensation that’s become as ubiquitous as Frozen’s “Let It Go” — was not nominated (Disney submitted “Dos Oruguitas” — which was also performed — instead, before “Bruno” exploded), the Academy still wisely ordered up a performance. It didn’t perform, starting low-key with members of the film’s voice cast singing in the aisles before moving onstage for a colorful dance sequence. But the real kicker came with a surprise cameo from hitmaker Megan Thee Stallion for an unexpected “Bruno” hip-hop remix that shouted out Zendaya.

It may not have received a single Oscar nod, but Zack Snyder’s Justice League still found a way to crash the awards. Powered by hardcore Snyderverse fans, the director’s four-hour opus was the unexpected top choice for the inaugural Oscars Cheer Moment — a new prize voted on by social media stans — beating out scenes from The Matrix and Spider-Man: No Way Home. The specific “Cheer Moment” was the sequence where Ezra Miller’s Flash entered the Speed Force to literally turn back time. And as Snyder told Yahoo Entertainment last year, it’s a scene that almost didn’t make the final cut. Now we live in a society where it’s a hilarious Oscar moment for the ages.

We should’ve known from the moment last year’s Best Supporting Actress winner (and owner of last year’s single best quotable), Yuh-Jung Youn (Minari), took the stage to present Best Supporting Actor that we were about to something special. It started with Youn beginning to sign the winner – a clear sign the award was going to CODA star and the first male actor ever to win an Oscar, Troy Kotsur. It continued as Kotsur took the stage to a standing ovation, with most in attendance waving their hands in “a silent applause.” And the waterworks really came with Kotsur’s moving speech, in which he recounted the cast’s recent trip to the White House, how the film has bridged the gap between hearing and deaf audiences, and the tragic story of a crash that paralyzed his hearing dad, leaving him no longer able to sign his son. How emotional was Kotsur’s speech? His own translator was heard choking up as he shared Kotsur’s words. Kotsur's night got even better as it went along: CODA won Best Picture, too.

The Oscars telecast officially began at 8 p.m. ET/5 p.m. PT, but the Academy actually began giving out statues an hour earlier after their (highly) controversial decision to not air five “below-the-line” and the three short categories live, ostensibly to cut down on runtime. That means by the time the show started, Dune had already won four Oscars. While the average viewer may not have noticed — or minded if they did — cinephiles and some high-profile filmmakers like Rian Johnson were in an uproar on Twitter, which was also the only place to find out what was winning. Those eight awards (including Sound, Score and Makeup) were still presented during the show but with trimmed pre-taped speeches. How exactly did that save much time? And was it really worth it to make room for tributes to James Bond and the Academy’s new museum? Feels like all parties involved could have avoided a lot of ire had they just aired those categories live.

HEAD-SCRATCHER: The random montages left us shaken, not stirred

Speaking of those montages… While there are notable James Bond milestones to note — namely the end of Daniel Craig's run as well as the 60th anniversary of 007's big-screen debut, there has to be a better way of paying tribute to the Bond franchise than a stitched-together clip reel randomly inserted into the Oscar telecast and introduced by three presenters — Tony Hawk, Kelly Slater and Shaun White — who have nothing to do with movies. Speaking of random, Wanda Sykes’s trip to the Academy Museum played like an extended commercial for a destination that a majority of the country will probably never visit. Maybe those five minutes could have been better used for one of the eight non-broadcast awards?

For the first — and hopefully not the last — time in Oscar history, female filmmakers have won back-to-back Best Director statues. The Power of the Dog director Jane Campion accepted her award one year after Chloé Zhao won for Nomadland and 28 years after her first nomination for The Piano. The New Zealand auteur thanked her creative collaborators and Thomas Sauvage, the author of the novel she adapted for her film. “It’s a lifetime honor,” she said in closing.

While the trio of hosts acquitted themselves well with a mix of zingers and bits, there was one notable misstep. Regina Hall revealed her single status at the start of the show, setting the stage for an extended sketch where she used COVID tests as an excuse to recruit some of Hollywood’s most eligible bachelors — including Bradley Cooper, Tyler Perry and Simu Liu — as well as those actors who allegedly have a more fluid status with their S.O’s. To her credit, Hall committed to the joke, but it fell flat with viewers who felt it made light of the still-ongoing pandemic. “Mad uncomfortable,” “poor taste,” and “icky” were some of the negative Twitter reviews.

LOW: Bob Chapek is part of an awkward night for Disney synergy

As eagle-eyed Twitter users noted, embattled Disney head, Bob Chapek, was in the audience as the creative types onstage were calling out the “Don’t Say Gay” bill — a piece of legislation he was notoriously slow to denounce. “Why didn’t they cut to him,” one critic wrote, before answering their own question by noting the Oscars were airing on the Disney-owned ABC. And there was plenty more overt Disney synergy to come: the upcoming Toy Story sidequel, Lightyear, got its own commercial (introduced by star Chris Evans); two songs from Encanto were performed live; and South Korean supergroup BTS talked about how much they love Pixar and Will Smith in … Aladdin? 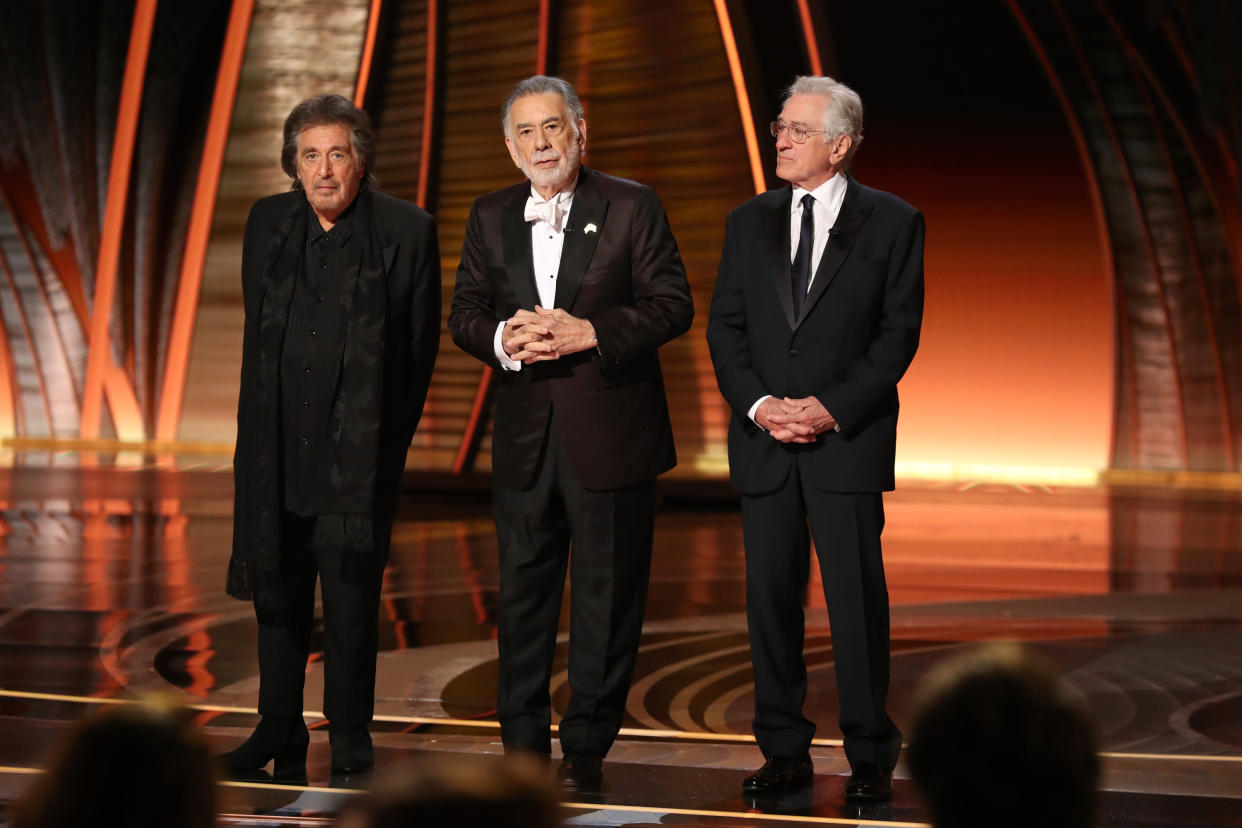 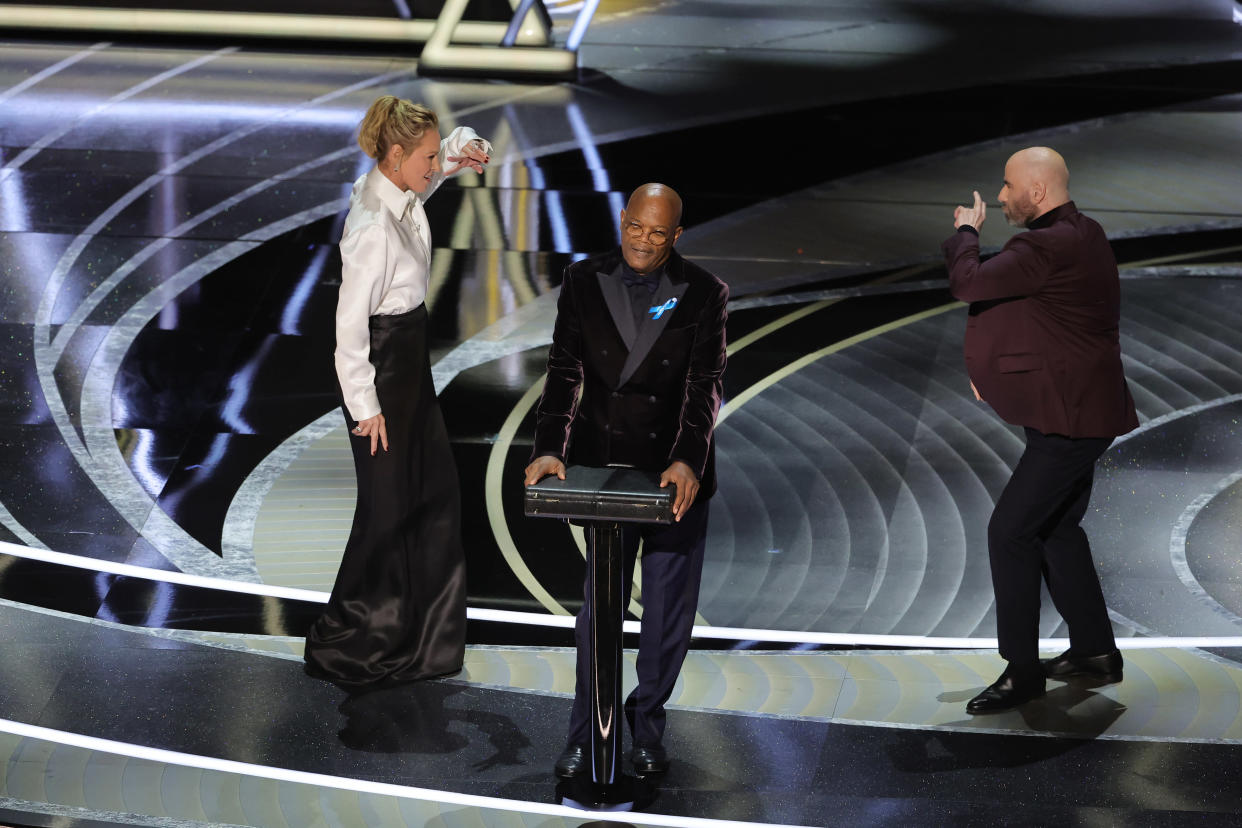