An impressive collection of wildlife imagery which include pictures of a blood-stained polar bear feeding on a seal pup and a large Red Deer with the backdrop of a beautiful wintery scene, are among those featured in a wildlife photography competition.

The breathtaking pictures were submitted as part of the Society of International Nature and Wildlife Photographers Living World competition and show some stunning sights from across the world.

Among the snaps was an up-close shot of a bee in a photographer’s garden in Essex and a silhouette of hummingbirds taken by a Dorset-based business director while on holiday in Costa Rica.

Winning the competition was musician Phil James, 26, with his picture of a Red Deer in a beautiful snow shower in the Caledonian Pine Forest in Scotland.

‘The lovely wintery image of a Red Deer represented the competition well and is a deserved winner.’ 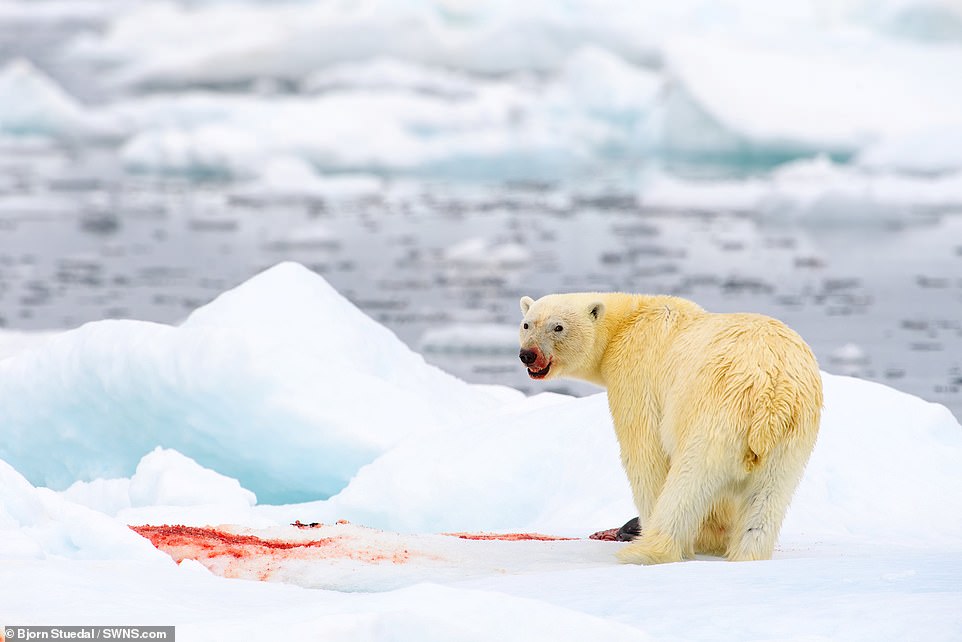 One of the top pictures submitted to the Society of International Nature and Wildlife Photographers Living World competition included a bloodied polar bear moments after feeding on a seal cub. The brutality of nature was depicted in the shot from Norwegian snapper Bjorn Stuedal, 54, from Hov, north of Oslo. He took the picture this summer on a trip to Svalbard with a small group of photographers sailing on the expedition ship MS Origo. Mr Stuedal said: ‘The bear dragged the prey onto the ice and skinned and ate it there, just in front of us. I managed to take a series of photos of the bear with the prey.’ 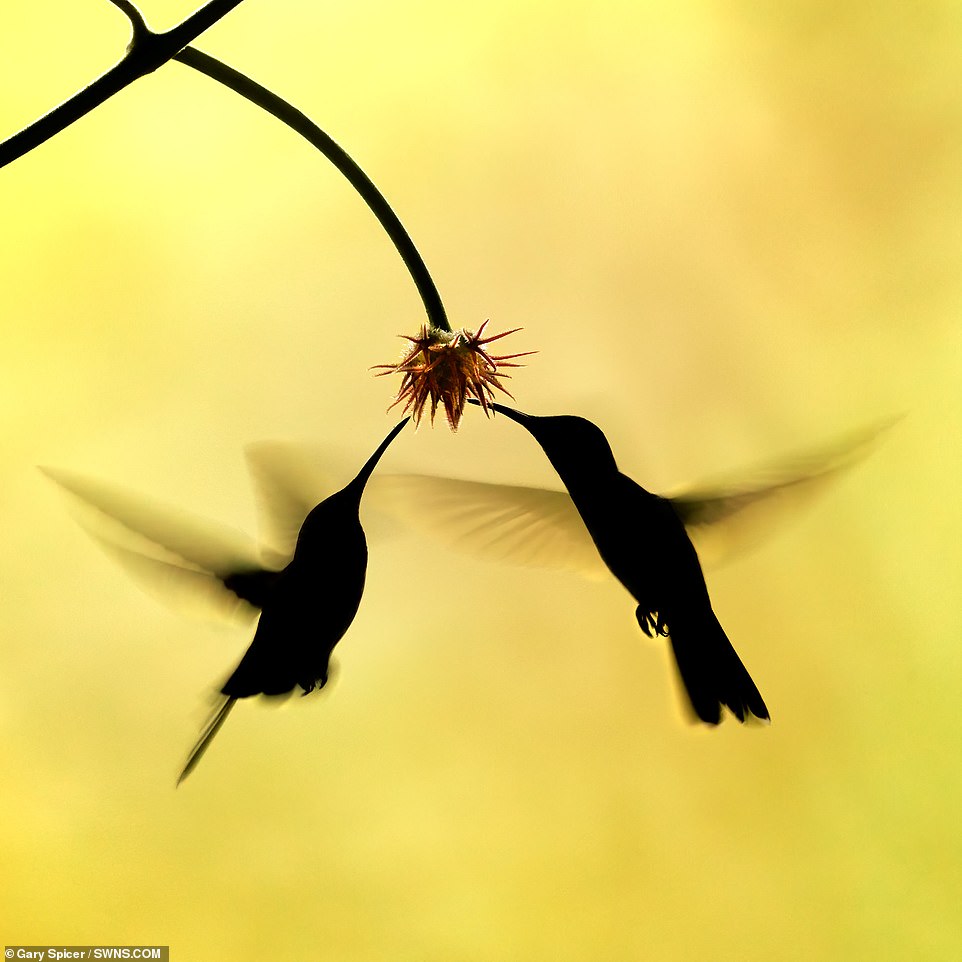 Brit Gary Spicer captured a silhouette of hummingbirds whilst in Costa Rica. Gary, 55, a company director of a roofing business in Shaftesbury, Dorset, pictured the Hummingbirds using a Hi Speed flash setup but said the group he was with couldn’t all use it at the same time. Whilst he was waiting he took this image using ambient light against the bright background outside creating the blurred wings as the flashed images freeze the wings 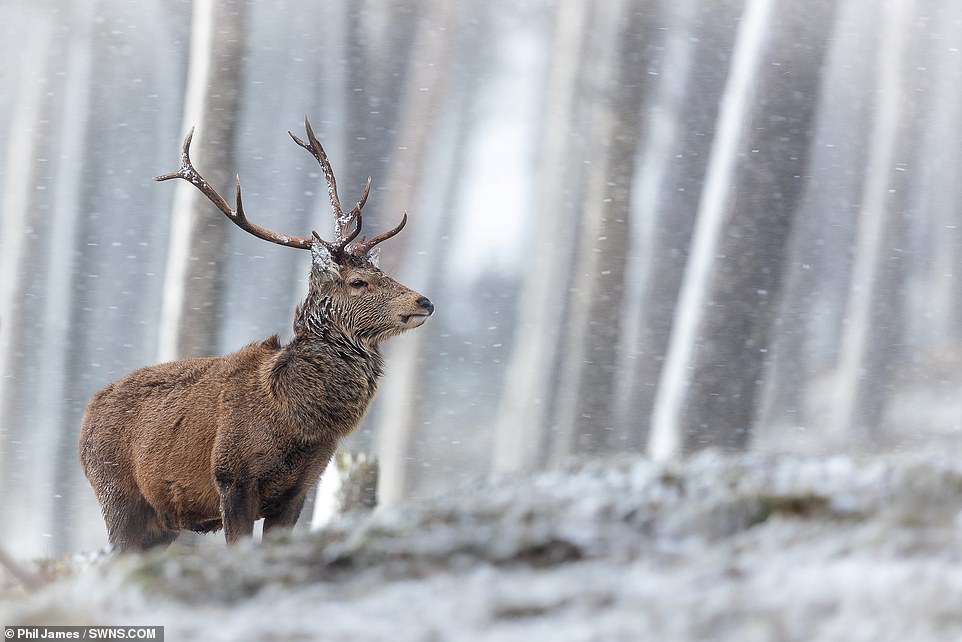 A Red Deer captured in a beautiful Scottish snow shower won first prize in the competition. The picture, taken by musician Phil James, 26, from Staffordshire, beat hundreds of other snaps. He took the impressive image at Alvie Estate in the Cairngorms, Scotland on a very cold February day which saw snow gathering on the animal’s ears. Mr James said: ‘It depicts a Red Deer Stag during a brief but heavy snowstorm in a remnant of the Caledonian Pine Forest.’ 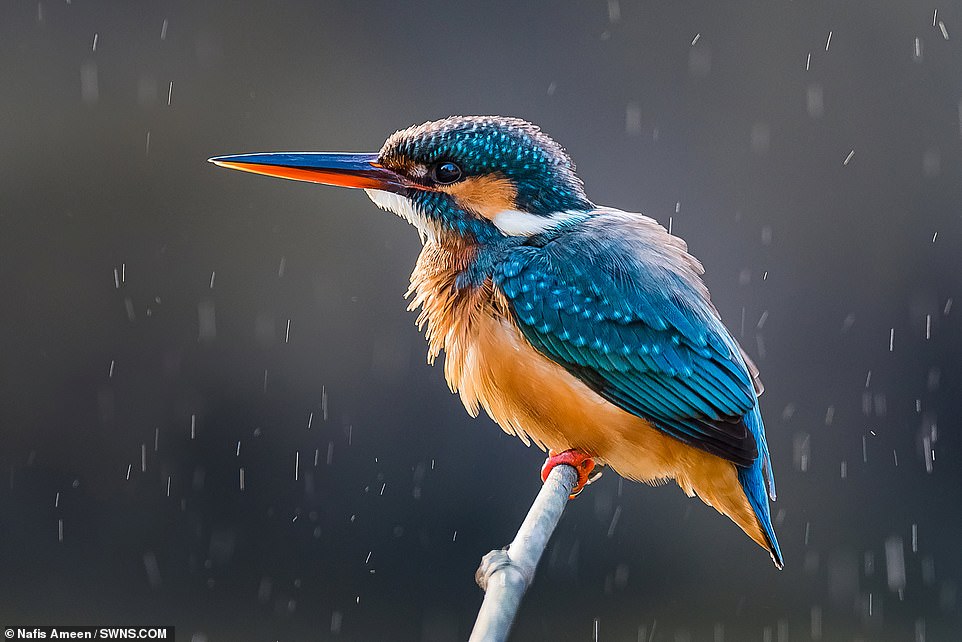 A common yet beautiful bird, the kingfisher, is brought to life in this highly commended snap by Nafis Ameen from Bangladesh. Nafis, who has been taking pictures since he was eight, said: ‘Every wildlife photographer likes the Common Kingfisher because of it’s beautiful colours.’ He had been trying to catch the moment the bird shakes off the water after diving 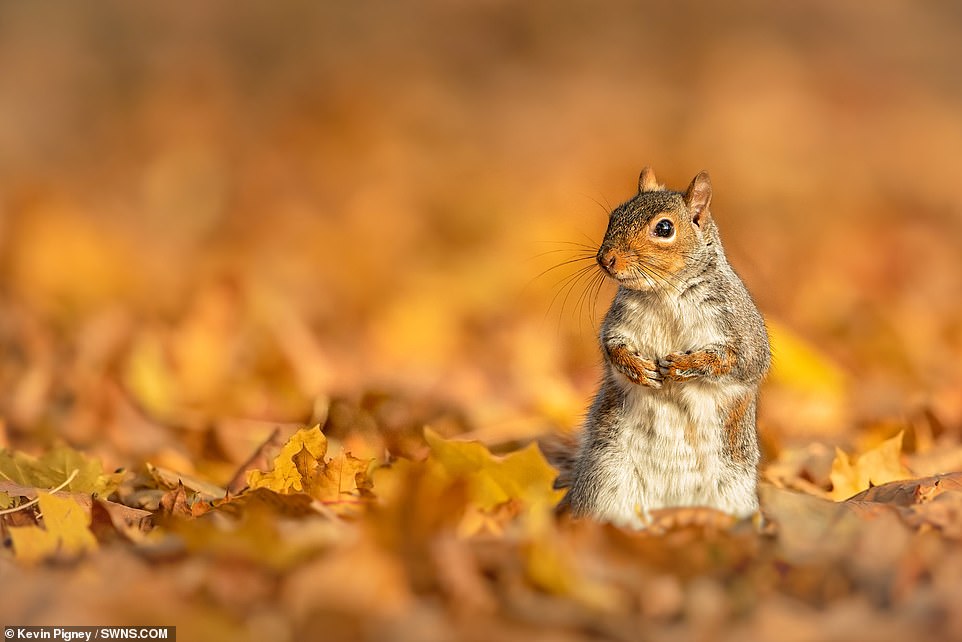 Runner-up in the competition was Kevin Pigney, an amateur photographer from Cambridge with his cute picture of an inquisitive grey squirrel against an autumnal backdrop. The sweet creature, which is commonly seen in parks and open spaces across the UK, appears to be holding its hands together poised in thought 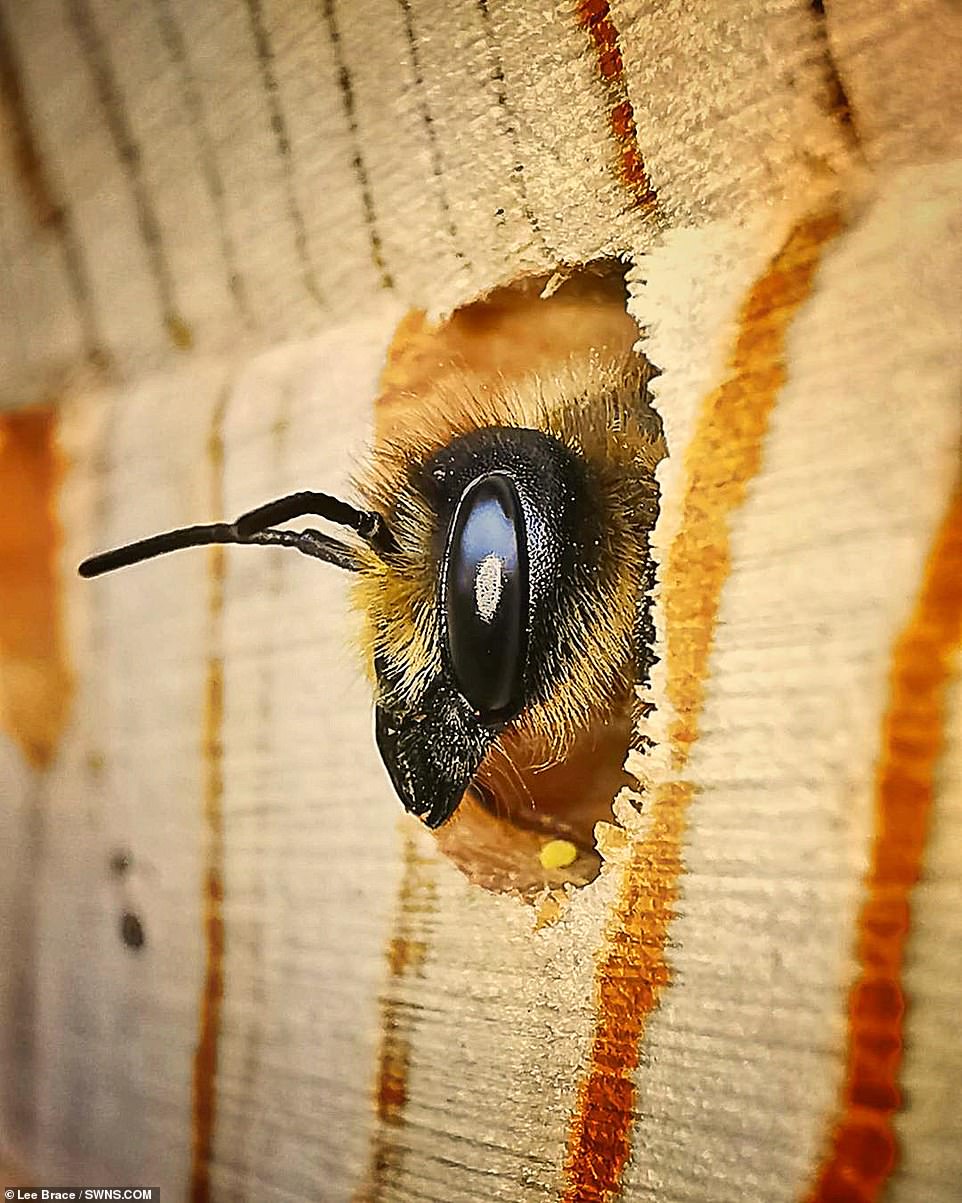 Another popular picture was a beautiful close-up of a bee resting in actor and comedian Lee Brace’s garden. The 38-year-old took the impressive image in Essex after spending the majority of 2020 connecting with nature and watching leaf-cutter bees. The female had been carving out sections of leaf, chewing it into a pulp, mixing it with saliva and creating the walls of a cosy cell for her future offspring. The photograph shows the incredible details of the bug’s face 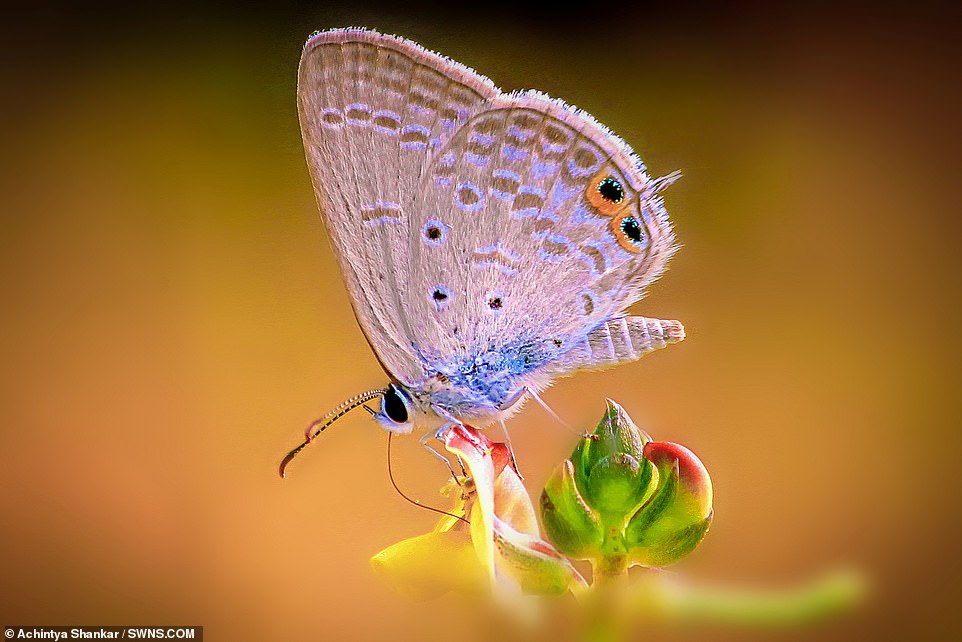 One snapper immersed himself in water to get the shot he wanted of an exquisite butterfly in Bengal. Achintya Shankar Adhikari, 32, from Kolkata, took the picture of the tiny Gram Blue butterfly which are seen in abundance in rural Bengal. He said: ‘I saw this butterfly on top of a bud but to take a good picture I had to go inside a pond and with half-body in the pond took this picture.’ 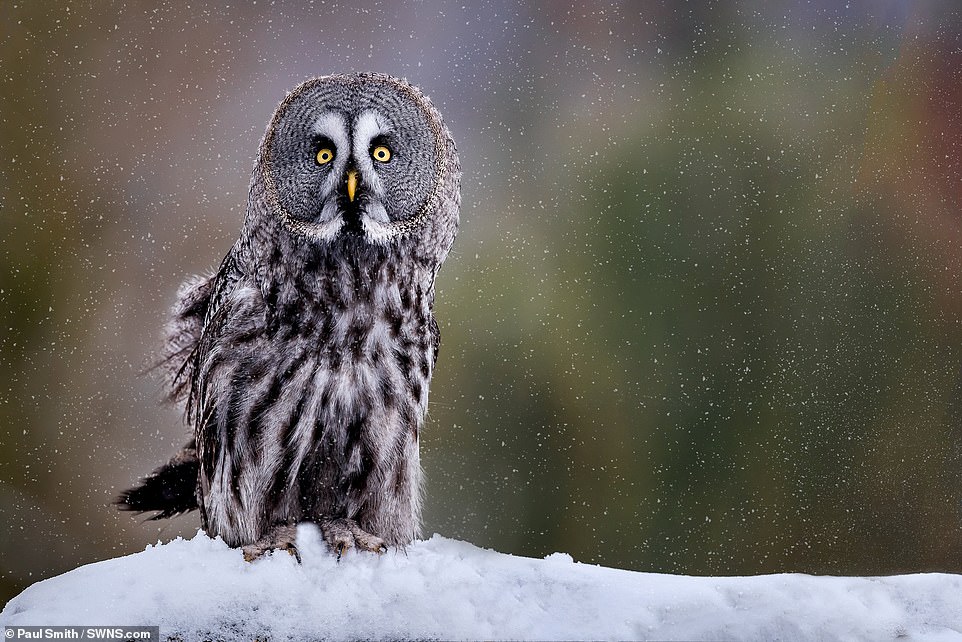 A beautiful winter scene was also in the running for the top prize of the wildlife photography competition. The image featured an inquisitive-looking Great Grey Owl who was captured staring into the distance by the photographer