Woman, in her 20s, who ‘hated being a mother’ left bottle of bleach out with straw in hope her three-year-old son would drink it, court hears

A woman who ‘resented being a mother’ left out a bottle of bleach with a straw in it – in the hope that her three-year-old son would drink it, a court has heard.

The mother, in her 20s, appeared at Leeds Crown Court after inflicting a catalogue of injuries on the toddler.

Hospital staff and social workers were shocked when the child was examined and found to have 80 bruises to his head and body, it was heard.

The woman, from Leeds, West Yorkshire, who has not been named to protect the boy’s identity, initially tried to blame her boyfriend for the injuries.

But she went on to admit what she had done which included leaving a bottle of bleach out with a straw in it for the youngster to drink.

She also told police how she had opened a window and left out some ladders in the hope the infant would climb out because she ‘hated being a mother’ and having to put him before anyone else.

The court heard harrowing details of the abuse as the woman was sentenced yesterday.

She pleaded guilty to two counts of child cruelty and was handed a two-year suspended sentence. 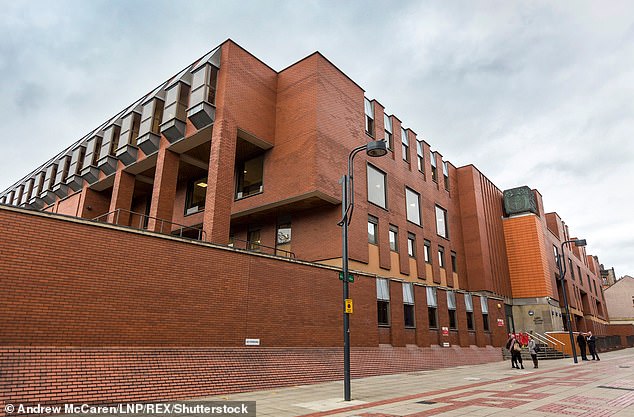 The mother, in her 20s, appeared at Leeds Crown Court (pictured) after inflicting a catalogue of injuries on the toddler

The court heard how the offending came to light when the mother took her son to the home of her boyfriend’s mother.

The older woman challenged the defendant about the injuries but was told he had fallen and she was guilty of ‘nothing but not watching him’.

However, the boyfriend’s mother contacted social services and social workers saw the child the next day.

They were shocked by the boy’s condition and said they ‘had never seen anything so bad’, the court heard.

The boy was taken to A&E before being placed in child protection.

Doctors examined the child and found extensive bruising on his arms, legs and head. There was also bleeding to his retina.

The child has since been placed in a ‘secure safe environment’ and is doing well, the court heard.

Despite initially trying to blame her boyfriend for the abuse, the woman later accepted neglecting the child over a four-month period.

The defendant went on to admit she had not fed her son properly, saying she resented being a mother and did not want the child in her life.

She said she ‘hated being a mother’ and having to put him before anyone else.

Craig Sutcliffe, mitigating, said his client was ashamed of herself and has been diagnosed a borderline personality disorder.

Judge Penelope Belcher said she was imposing a non-custodial sentence so the defendant can work with the probation service and receive support for her personality disorder.

She said: ‘This would not be available for a short custodial sentence and the work would not be done. That is why it is in the public interest.’

Judge Belcher told the woman: ‘If you had another child social services would be all over this and you might find that the child would be removed.’

As well as a suspended sentence the woman was ordered to complete 40 rehabilitation activity requirement days and handed a six-month curfew order.