A British woman has sparked outrage in Italy by posing naked at the top of the majestic steps of the Amalfi cathedral for a photo shoot.

Using nothing but a flowing red veil to cover herself, the woman stunned early-rising locals on Monday morning with the risque display.

Local Italian news outlets reported that the woman was an influencer, who said she was creating a ‘personal memory’ with two other tourists – another British woman, her assistant, and a male ‘photographer’ reportedly from North America. 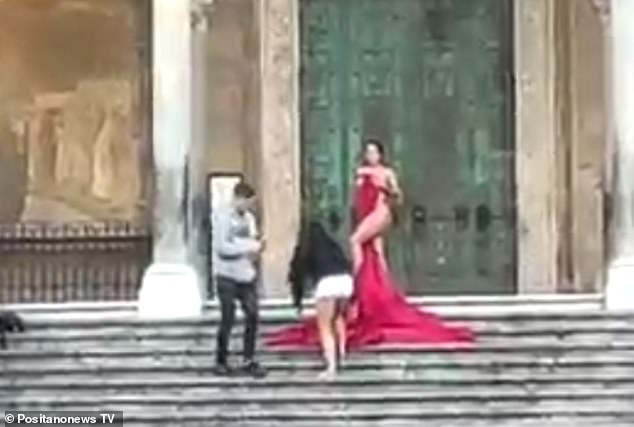 The steps leading up to the entrance of the Sant’Andrea cathedral are long, and rise above a square on which dozens of small shops, cafes and restaurants sit.

Do you know the people in this video?

Footage of the photoshoot shows workers, pausing their task of unloading boxes ready for the week ahead, to instead film the spectacle at the top of the staircase.

Video recorded from a window in a residence above one of the many establishments shows the woman striking various seductive poses for the camera.

She allows the red veil to flow down her body in a way clearly intended to accentuate her figure, with the famous cathedral’s bronze doors as the backdrop.

Her assistant is seen spreading the veil out on the steps as the woman poses, to create a striking red image contrasted with the stone steps.

The man is shown walking around the woman as she poses, taking photos or filming the scene. A mural depicting Jesus is seen above the doors behind her. 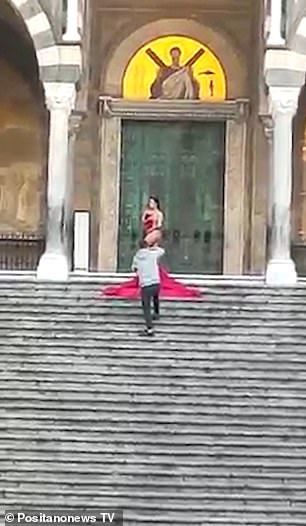 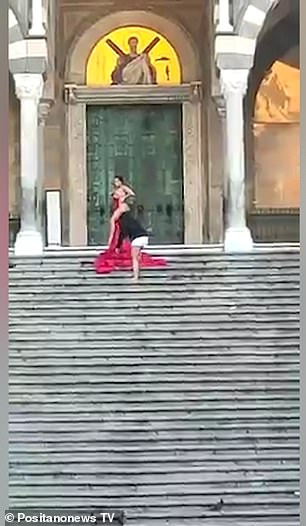 Using nothing but a flowing red veil to cover herself, the woman (pictured) stunned early-rising locals on Monday morning with the risque display, with her ‘photographer’ and ‘assistant’ 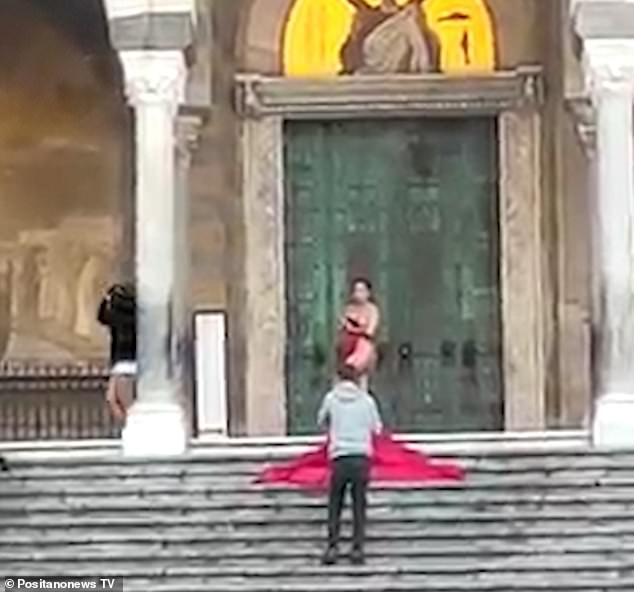 Pictured: The woman is seen posing in front of the iron doors of the Sant’Andrea Cathedral

The photoshoot would have likely gone on for longer, but local police officers broke up the trio before they could finish, local newspaper Il Mattino reported, after passersbys phoned the authorities.

Reports say the trio did not have the proper permissions for the photoshoot.

While reports suggest they were allowed to leave the scene at the time by officers, local officials – upon hearing of the incident – caught up with them before the left the Amalfi, and they were reprimanded for ‘obscene acts in a public place’.

They have also been warned against sharing the photographs further. 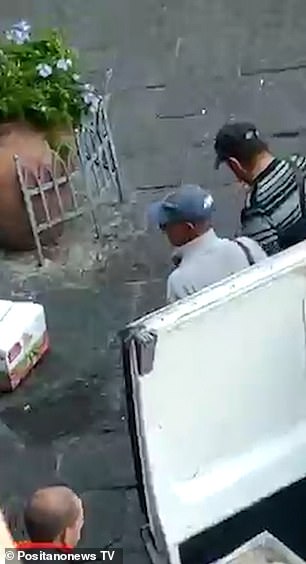 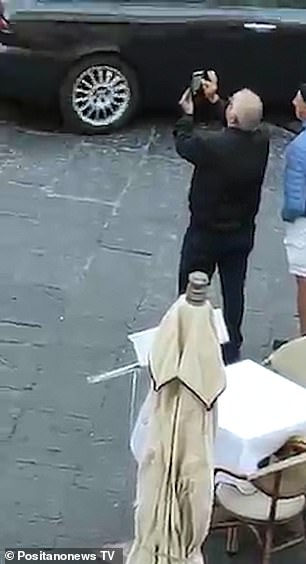 The steps leading up to the entrance of the Sant’Andrea cathedral are long, and rise above a square on which dozens of small shops, cafes and restaurants sit. Footage of the photoshoot shows workers, pausing their task of unloading boxes ready for the week ahead, to instead film the spectacle at the top of the staircase

The incident sparked outrage from Italians, who were angry at the woman and her cohort for hosting the photoshoot at the historic and religious site.

‘Undress[ing] badly in front of a cathedral of considerable importance [is] squalid and unacceptable … shame!’ one person wrote on Facebook.

Another wrote: ‘The scandalous thing is not the fact that she is doing a nude photo shoot, but that she has chosen the facade of a church as the location.’ 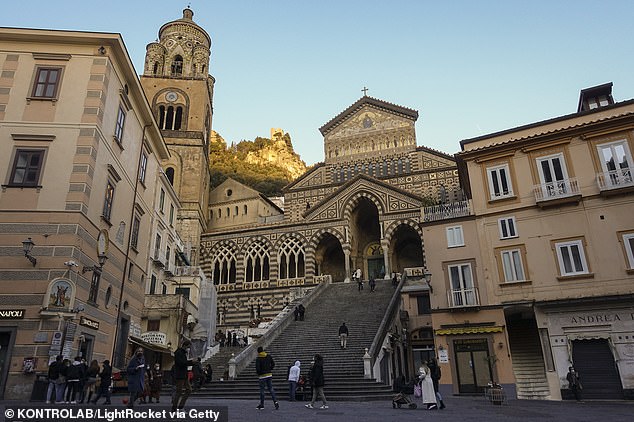 Pictured: A view of the Sant’Andrea cathedral in Amalfi, one of the most famous attractions of the Italian Amalfi Coast

A third person questioned how the people in the footage had been allowed to carry out the photoshoot, saying they needed the right authorisation when they used the staircase to take photos for their child’s baptism.

The Sant’Andrea Cathedral itself is tucked in between the mountains and sea on the Bay of Salerno, on Italy’s southwest coast.

It was founded in the ninth century and rebuilt in the 11th century in the Romaesque style, and then altered several times.

The facade and the atrium date from 1800s, but the carved bronze doors were cast in Constantinople around 1000, making them a culturally significant artefact.