Unions could CRIPPLE Britain with new Covid rules: Staff told they can take 28 days off WITHOUT sick note under latest measures to help vaccine rollout

Unions are telling public sector workers they can now take 28 days off work without a sick note as a result of new Covid rules.

There are fears the new rule, which was introduced so GPs were free to administer vaccines, will be abused by workers looking to stay home.

Public sector union Unison told its members: ‘The UK Government has made a temporary change to the provision of ‘fit notes’ until January 27 2022.

‘If you go off sick on or after December 10 2021, employers can only ask employees for proof of sickness (such as a fit note) after 28 days of sickness (including non-working days).’ 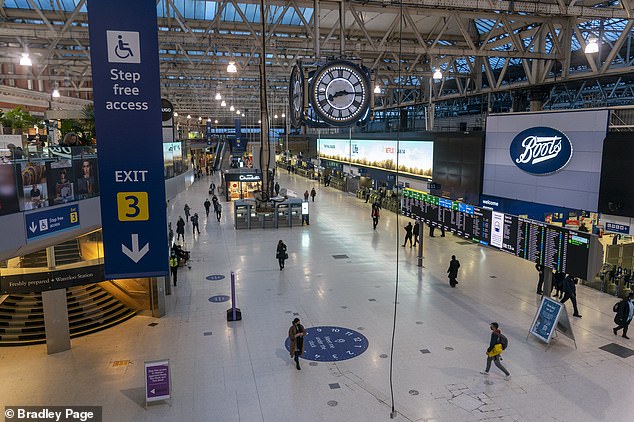 Unions are telling public sector workers they can now take 28 days off work without a sick note as a result of new Covid rules. Pictured: A deserted Waterloo Station at 8.15am Tuesday 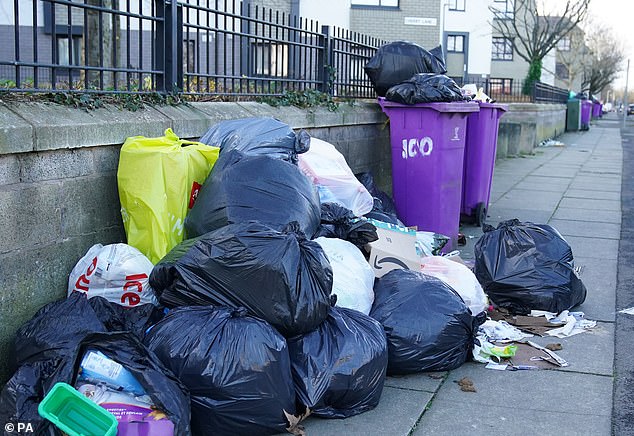 MPs have urged the Government to reverse the rule over concerns it could be abused at a time when the UK is facing staffing crisis. Pictured: Overflowing bins in the Walton area of Liverpool

Circulating the update to its 1.4million members, it added that ‘proof of sickness cannot be requested earlier than 28 days’.

Before the rule change, anyone who needed to stay off work with an illness for more than a week was required to produce a sick note from their GP.

The rule change has come when the Government is also introducing changes to testing and isolation rules.

From January 11 anyone who tests positive for Covid using a lateral flow test at home will not need to take a PCR test to confirm the result.

MPs have called for the Government to reverse the rule over fears it could cripple the country if more people are allowed to stay home from work, according to the Telegraph.

Around 1.3million Britons are currently thought to be languishing under house arrest as the NHS, rail services and bin collections all buckle under the weight of staff absences. 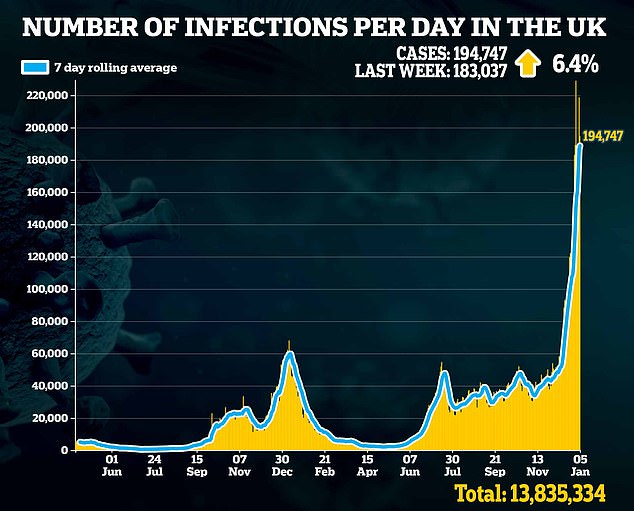 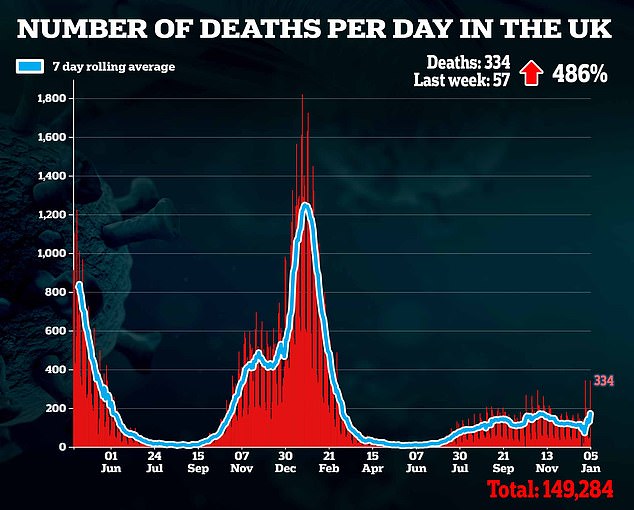 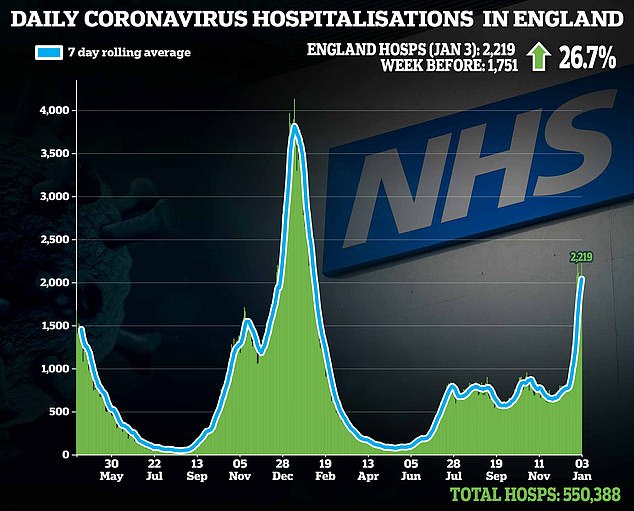 With 183,000 Brits being sent into isolation every day on average, the situation is expected to get worse before it gets better.

There are growing calls from experts, businesses and even NHS leaders themselves to cut self-isolation to five days to avoid paralysing the economy and disrupting vital services.

Train services and bin collections are also grinding to a halt as the virus spreads, while schools are warning that they may not have enough teachers in work to run their normal timetables.

Brendan Clarke-Smith, a Conservative MP on the education select committee, told the Telegraph he believed the rule was ‘open to abuse’ particularly in sectors ‘where we can’t really afford for that to happen’.

He added: ‘There is a debate to be had about the 28 days – that is quite a long period for someone to be off for, and in terms of what that will do to the workforce.

Sir John Hayes, a Conservative MP and former minister, told the paper: ‘That may have been necessary during the period where we were getting the booster out quickly, but we certainly need to review it as soon as possible.’ 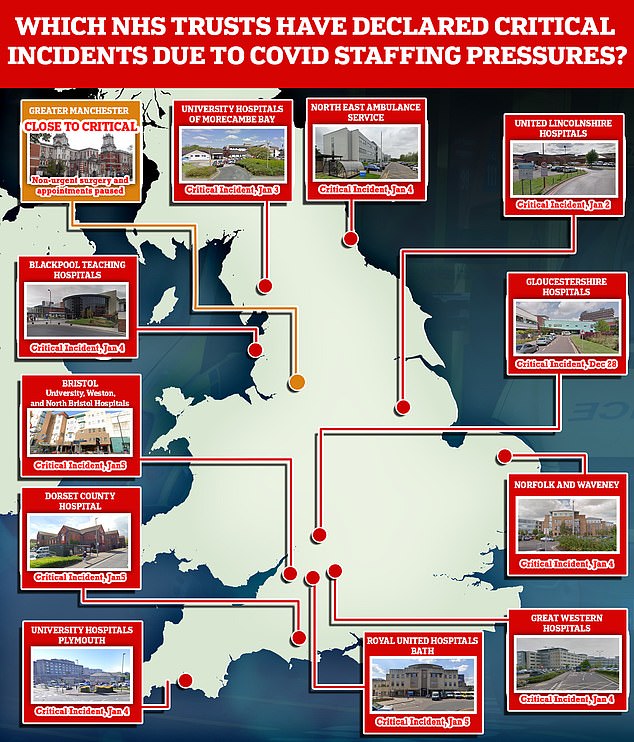 Pictured: NHS trusts across England have declared ‘critical incidents’ indicating that they may be unable to deliver vital care to patients in the coming weeks due to the staffing crisis

More than 20 NHS trusts have now declared a ‘critical incident’ amid staggering staffing shortages caused by the rapid spread of Omicron, as medics called for infection control rules to be loosened to increase capacity.

The Prime Minister’s official spokesperson said more than 20 of England’s 137 trusts — 15 per cent of the entire health service — have signalled they may not be able to deliver vital care in the coming weeks.

But the spokesperson stressed the alert level is ‘not a good indicator’ of the pressures the health service was under because it only provides a snapshot in time.

Hospitals have cancelled operations and the Prime Minister yesterday revealed plans are being drawn up to call in the Army if the crisis continues to worsen.

Some non-urgent operations at 17 hospitals across Greater Manchester was called off, as health chiefs said 15 per cent of their staff were stuck at home with Covid.

Unison said it was only circulating rules that the Government had introduced to ensure its members were aware of the change in legislation.

Jon Richards, the assistant general secretary of Unison, said: ‘These temporary rules were of the Government’s making to relieve pressure on GPs.

‘Public sector employees have been keeping essential services running throughout the pandemic.

‘Most have had no option to work from home, putting them at higher risk of illness as they continue to go into their workplaces.

‘Woeful levels of sick pay mean many public sector staff would rather not be off work.’